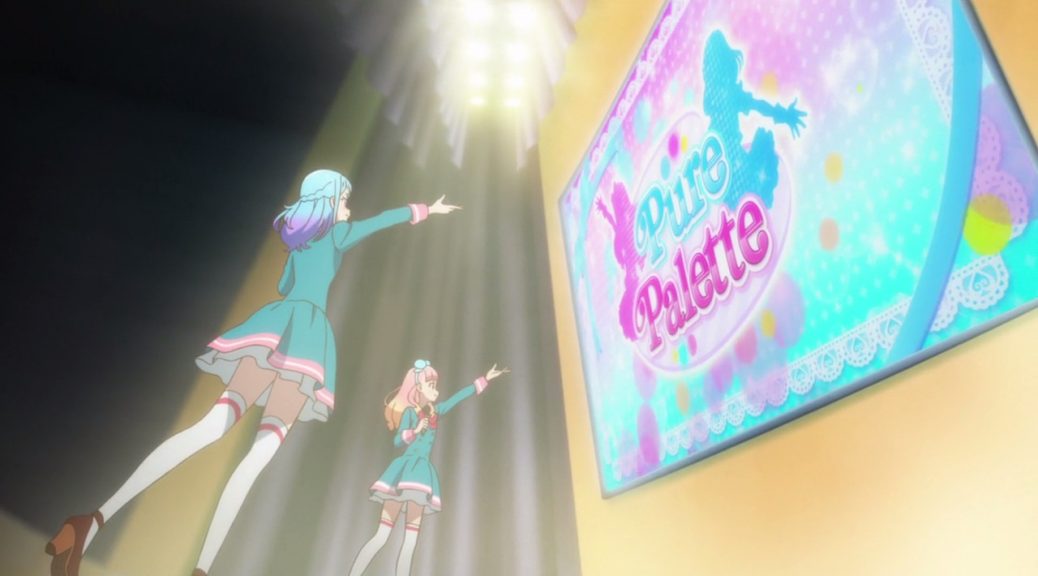 With a key episode in the bag and the series reaching its first turning point, it’s time for us to return to the world of Aikatsu Friends! for some more coverage – not just of the wonderful episode #11, but also of how the production has fared since the beginning and the way they’ve built Mio’s textured character in particular.

StoryboardStoryboard (絵コンテ, ekonte): The blueprints of animation. A series of usually simple drawings serving as anime's visual script, drawn on special sheets with fields for the animation cut number, notes for the staff and the matching lines of dialogue. More: Marie Tagashira
Episode DirectionEpisode Direction (演出, enshutsu): A creative but also coordinative task, as it entails supervising the many departments and artists involved in the production of an episode – approving animation layouts alongside the Animation Director, overseeing the work of the photography team, the art department, CG staff... The role also exists in movies, refering to the individuals similarly in charge of segments of the film.: Megumi Yamamoto
Animation DirectionAnimation Direction (作画監督, sakuga kantoku): The artists supervising the quality and consistency of the animation itself. They might correct cuts that deviate from the designs too much if they see it fit, but their job is mostly to ensure the motion is up to par while not looking too rough. Plenty of specialized Animation Direction roles exist – mecha, effects, creatures, all focused in one particular recurring element.: Risa Miyadani, Rie Nakajima

– Before we get into the meat of things, allow me some time to talk about the show in general. One of my recurring gripes with Aikatsu has been its tendency to forget that characters exist when the focus moves to someone else, not just on a screentime level but in considering their place in the world. Friends has so far been better constructed in that regard, going to great lengths to show the influence each character has over one another even when someone can’t make much of an appearance, particularly when it comes to Mio. I previously praised director Tatsuya Igarashi for the show’s success in establishing its own identity without losing the charm that made the franchise what it is, so it only seems fair to credit him in part for addressing a long-lasting complaint I’ve held towards a franchise I love.

– Though with these posts I intended to get readers more acquainted with Aikatsu’s core crew and its substudio in general, I shouldn’t miss the chance to talk about a guest whose presence has been a pleasant surprise: Takahiko Kyougoku. The director behind the adaptation of the soul-destroying yet enchanting Land of the Lustrous is no stranger to this site, but being able to discuss him in the context of Aikatsu is admittedly not something I would have expected considering his only involvement in the franchise to this point was on Stars’ second ending. Taking part in two episodes – storyboarding #4 and directing/partially storyboarding #8 – is a sign that he’s been left with some free time now that he’s done with the sad gems, especially considering he’s also been appearing in other shows this year. Among them all it’s Aikatsu Friends that he’s focusing on the most, which doesn’t seem a coincidence when you consider the presence of one of his pupils who likely brought him along. It’s either that or him having embraced the greatness of Aikatsu. Both sound fine to me!

– Kyougoku’s output is often characterised by his very specific brand of humour; hardly a surprise when Love Live’s almost endless barrage of silly faces and gags is just him channeling existing qualities into a full length series, and the same holds true in this context. The dashing and noble Penne-sama dragging Momone away to stop her from harassing Mio will likely remain one of the most memorable parts of the show, more so when they’ve seen fit to re-use it when appropriate. Even Aine’s outrageous ability to make friends is poked fun at by her ever-expanding book of friends during each failure to secure ties with major brands, and these adventures are underscored with the cute Penne-sama cut-ins to transition between them. And goofy faces, because of course.

– True as it is though, chalking him up to just that would be doing him a disservice. Funny faces man isn’t the sort of personality who can be tasked with a gut-wrenching story like Land of the Lustrous and turn it into a candidate for best show of its respective year no matter how strong the source material is. While Kyougoku admittedly tends to tone down his approach when participating in kids’ shows, Aikatsu has already proven that such consideration isn’t necessary. His staging and portrayal of space are eye-catching in their own right, but it’s when they’re mechanisms to express the key themes of the episode where they shine the most. Aine’s decision to visit Chiharu for advice turns into an accidental journey towards her discovery of Sugar Melody – one that eventually peaks with Chiharu’s misgivings about her skill as a designer and setting up her own brand being challenged by Aine’s absolute confidence that nothing else will do for her. Aine breaking through and having her performance seemingly marks the end of the journey, but our final visual of it is in the results it’s produced, the tease towards Maika’s formal introduction seen below that stood out just as much as it should in the context of her character. 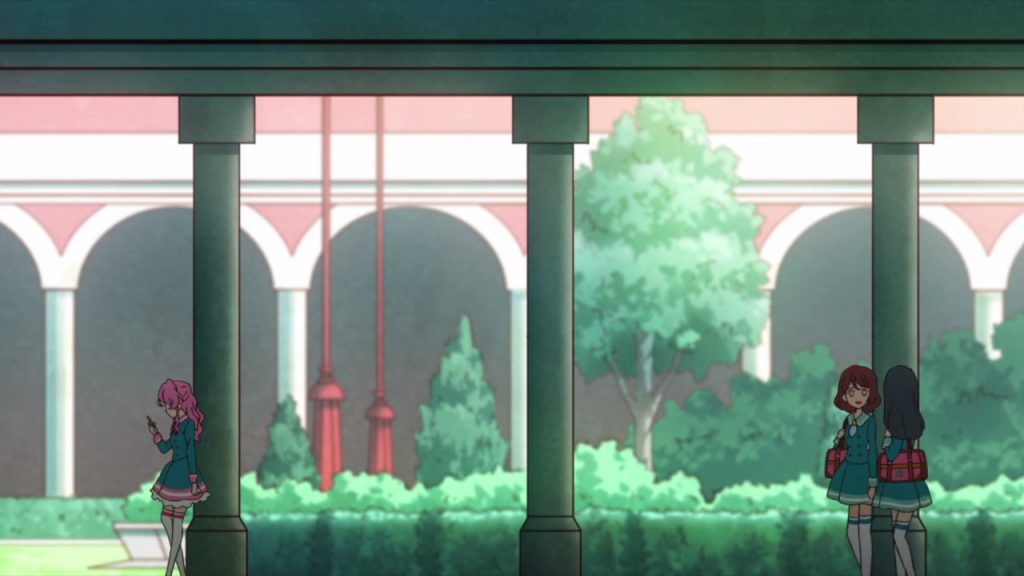 – In terms of staff who are regulars on the series, episode 9 was in theory one of the strongest lineups so far. I say in theory however, because Kiyoko Sayama didn’t quite live up to her previous outings despite having full control of the episode, though she did have some fun with Aine reading her fanletter. That said, she also has other obligations with her own show that’s airing this season, so it’s understandable that she would give that a higher priority. On the bright side, Hanako Mitsubachi more than made up for it with her unmistakable supervision. Cute, round and fun art is one of her fortes – the more exaggerated the better – but I’d like to mention her ability to bring out a more feminine side to the cast, particularly through softer drawings and expressions, as well as selling how weak and frail Aine seems after falling sick. She’s easily one of the strongest animation directors on the team at the moment, so safe to say I’m looking forward to her next appearance.

– And thus we finally get to arguably the most important episode of the show so far. Aine and Mio forming a unit together was always a given, but what sets Friends apart from its predecessors is the path that’s lead us here. This is all down to Mio and how she’s been presented to us throughout the show. Our first introduction to her is through the lens of Aine, so it’s only natural that she would come off as the flawless top idol we’ve come to expect. The closer they become though, the more apparent it is that things aren’t as they seem. Her cool attitude and mystique begin to take a back seat to her clumsier and awkward traits; the nerdy reactions to Love Me Tear, her inability to contain herself from spewing essays about them to others, even the way she takes to Penne-sama all give us a superficial look at how silly she can be. But the further in we get, the clearer it becomes that our initial impression of her wasn’t even close to her true self. Under the cool visage lies a surprisingly gullible girl who’s simply not used to interacting with others on a personal level. Conceptually none of this is all that innovative, but the texture they’ve given to her character on what could have been a simple, easygoing show for kids is very impressive.

– Keeping that in mind, it’s no surprise then that episode 11 focuses first and foremost on bringing Mio’s personal issues to the forefront, rather than the formation of the unit itself. Each scene feels like it exists to tell us more about her, with a huge focus on her expressions and mannerisms, particularly during the sequence that takes place in her room. The transition from her exaggerated excitement over Love Me Tear to realistic acting when trying to work out how to ask Aine feels seamless because that’s just who she is. The seemingly perfect idol isn’t just a clueless child who has to do the in-universe version of googling how to become truly close to someone. Her anxiety and slight jealousy over the idea of someone else grouping with Aine causes her to follow them around and almost even accept the possibility of it happening, which is the kind of scene that again works on a comedic level while underlining her severe insecurities. Risa Miyadani making her return shows that there was a clear priority with this episode, as she’s easily one of the most capable people on the team when it comes to sheer power of expression, even if we’re talking about a gag character with little screentime like Coco. Assuming she handled the first half, Rie Nakajima also lived up to the standard required for this outing during the second half, particularly with Mio’s shyness after dragging Aine along to the Ferris wheel.

– Wrapping things up with a quick look at the most impressive performances so far feels appropriate, so let’s do just that. Admittedly Love Me Tear’s Believe it felt a bit underwhelming considering the song itself is a certified banger and I always read it in Boruto’s dad’s voice, but I’m willing to forgive it since Mirai’s Identity performance is fantastic. There’s a unified theme of straying from the norm, all in line with her own personality, backed up by a new approach to the lighting. The development of lighting techniques seems to be a trend with Friends though, as seen with their attempts to have it work more naturally during Maika’s Girls be ambitious! Said attempts were a success in my eyes, adding an extra layer of oomph to what would already be a powerful performance. We’re bound to see some special stuff later on if they keep on track.