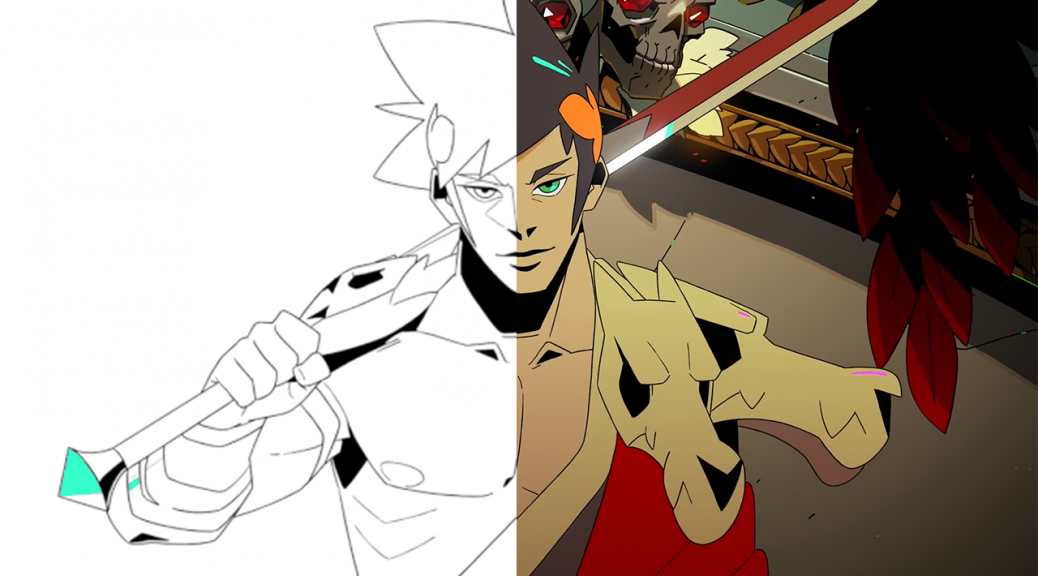 A few days ago, the stunning trailer for Hades served as an introduction to Studio Grackle. We had an opportunity to chat with the person who directed it: animator and now studio founder Spencer Wan. He opened up about their origins, production methods, and the creative and labor goals behind it all. They’re a team to keep an eye on, now and even more so in the future!

— The very first thing you did as you unveiled your new studio was joking that you stumbled upon its creation by accident. After reading that, I need to ask about the studio’s backstory.

So what happened is, Jen Zee approached me on Twitter and asked if I’d be interested in working on the Hades trailer. We ended up realizing pretty quickly that because of the California Assembly Bill 5, Supergiant wouldn’t be able to work with me unless I had a business entity. I ended up saying something like “Well damn, I might as well just hire a team and start a studio”, and to my surprise she was like, “Yeah, that sounds good.” So then I thought, “Oh, alright. I guess I’ll just do that then.”

It was less an accident than it was just completely unintentional, but that doesn’t sound as good in a tweet.

— And as a result of that, we’ve got Studio Grackle now. The studio offers its services for a wide array of animation-related tasks, but do you have a specific target when it comes to the scope and nature of your projects? Which is to say: what type of work can we expect from the studio for now?

For the moment you can expect boutique work. We’re doing all this from the ground up, and I don’t have any rich relatives to get loans from, so we need to do that for a bit until we have enough money to break into original work.

— Assuming it all goes well, do you have any sort of dream project you’d eventually love to handle?

I have an original project I’d like to make. I don’t know if I’d call it a dream project, but I think people would like it if we made it. Can’t say much more than that for now.

— On a more humane level, the meaning behind the studio’s name stuck with me: a loud, bold stance against an industry that’s disenfranchised so many. Do you have any specific policies to address all these problems that plague animation in mind?

You’ll have to ask me some other time about policy. The studio has only existed for a few months. We’re barely a working operation right now, so it’s far too early to implement everything I want to.

What I can say for now is that I’m committed to compensating artists properly. On Hades, I ended up paying the animators American union rates, which is more than ten times what they’d make on a Japanese production. We’re not in the union, at least not yet, so we were under no obligation to pay this way, but to me it’s the obvious thing to do.

It’s also worth mentioning that no form of discrimination or harassment will ever be tolerated here. I am gay and of mixed race, so this will always be non-negotiable for me. You’d think that would be obvious, but this sort of thing is a huge problem in the American animation industry. It’s not ever happening here.

— That conviction is a great start already. Another point from your site that stood out is the emphasis on globally sourced talent, which is already on display as that Hades intro showcases the work of artists with very different backgrounds. Did you make a conscious effort in that direction, or did it just come about naturally?

I didn’t really think that hard about it. I had this script and these designs, and I needed people to make things out of this script and these designs. The concept of globally sourced talent didn’t actually figure into my decision making. I just picked the best people I knew for each department, and in this case that was people from around the world.

— As someone who’s been hired through social media and grew a creative network that way, I assume that will keep being your modus operandi moving forward too.

The truth is that everyone hires that way now, not just me. That’s just how the industry works these days.

— Going back to that diverse lineup of creators: the benefits of such an approach are obvious, but so are the potential downsides of mixing artists used to different pipelines—from subtle differences between x-sheets and Japanese timesheets to bigger discrepancies. Have you struggled with that so far?

Well, for our first project I decided it would be better to use a process that the animators were already comfortable with. Weilin, Gem, Maverick, and Chengxi know the Japanese pipeline, so I asked them to work that way this time. The only difference is that I asked them not to write x-sheets. They’re not necessary unless there’s paper involved, and you save a lot of time by excluding them.

The other part of my team comes from the American industry. We don’t have a universal set of standards for a pipeline here anymore, so anyone here with a little experience ends up being flexible and resourceful. I asked them to adapt to a system that the animators already knew, and they had no problem doing it. We solved all of our pipeline issues before they occurred.

— Is there anything else about the hybrid pipeline you’ve got in mind that you’d like to share?

That’s mostly it. At the moment, our pipeline borrows the animation part from the Japanese way: Layout, to director notes, to key animationKey Animation (原画, genga): These artists draw the pivotal moments within the animation, basically defining the motion without actually completing the cut. The anime industry is known for allowing these individual artists lots of room to express their own style..

The background and compositing part is done the American way, where the animators aren’t drawing full BG layoutsLayouts (レイアウト): The drawings where animation is actually born; they expand the usually simple visual ideas from the storyboard into the actual skeleton of animation, detailing both the work of the key animator and the background artists. and aren’t in control of the effects treatment. I still let the animators throw down loose guides for the BG and make requests for the compositing, but it’s better to let the specialists handle their own departments. The depth of field on Weilin’s animation was particularly tricky and required a lot of collaboration between Craig and Robby, our compositor and clean-up artist. That sort of effect only gets reached through teamwork and cooperation, not by one worker making demands on a sheet of paper.

I have many more plans in mind to improve our pipeline, but I didn’t want to rock the boat too much on the first project. For now we’re just borrowing parts of things that’ve been done, but I hope to get more creative later. Again, we’ve only existed for a few months and it’s far too early to talk specifics.

— Before we wrap up, I’d like to ask about the consequences of launching a studio from a more personal angle. Do you see yourself focusing more on conceptual and directorial roles in the future, or do you plan to stay in the animation trenches?

I have no idea, but I’d probably get bored just directing.

— Speaking of more conceptual works, can we expect to see you credited on Spider-Verse 2 under Studio Grackle’s name?

Hahaha no. They’re working with me, not the studio. I’m not currently taking a paycheck from Grackle, so if they were crediting Grackle, I’d be fucked.

— You’ve always been open about your influences as an animator, but now that you’ve climbed up the production ladder so much, are there any directors or studio leaders you look up in similar fashion?

I think I probably wouldn’t have done this if I knew of any. I’d just be off working with them right now instead. I started Grackle because I’m sick of the way things are done.

— Now that’s a strong statement to end on. Thank you very much for your answers, and good luck!

Spencer Wan is a cool dood

Studio Grackle gives me hope. I keep hearing about how oppressive the animation industry (like all industries) tend to be for marginalized groups. They’re often viewed with an overly critical lens that white people just don’t deal with, preventing them from getting hired or having a lot of upward mobility. But this is a studio made by, in his own words, a gay and mixed-race man. It doesn’t guarantee anything (gay and POC can still be bigoted), but I’d like to believe Spencer when he says he wants to make something better. And the fact that he’s one of the… Read more »

Fantastic interview. Gives me hope that one-day talented animators and artists get the rightful treatment they deserve, financially and creatively.

Not sure why he had to bring up the gay marginalized thing.
It must be a big deal – as in, a real problem, not just a personal thing – for him to speak of it unprompted.