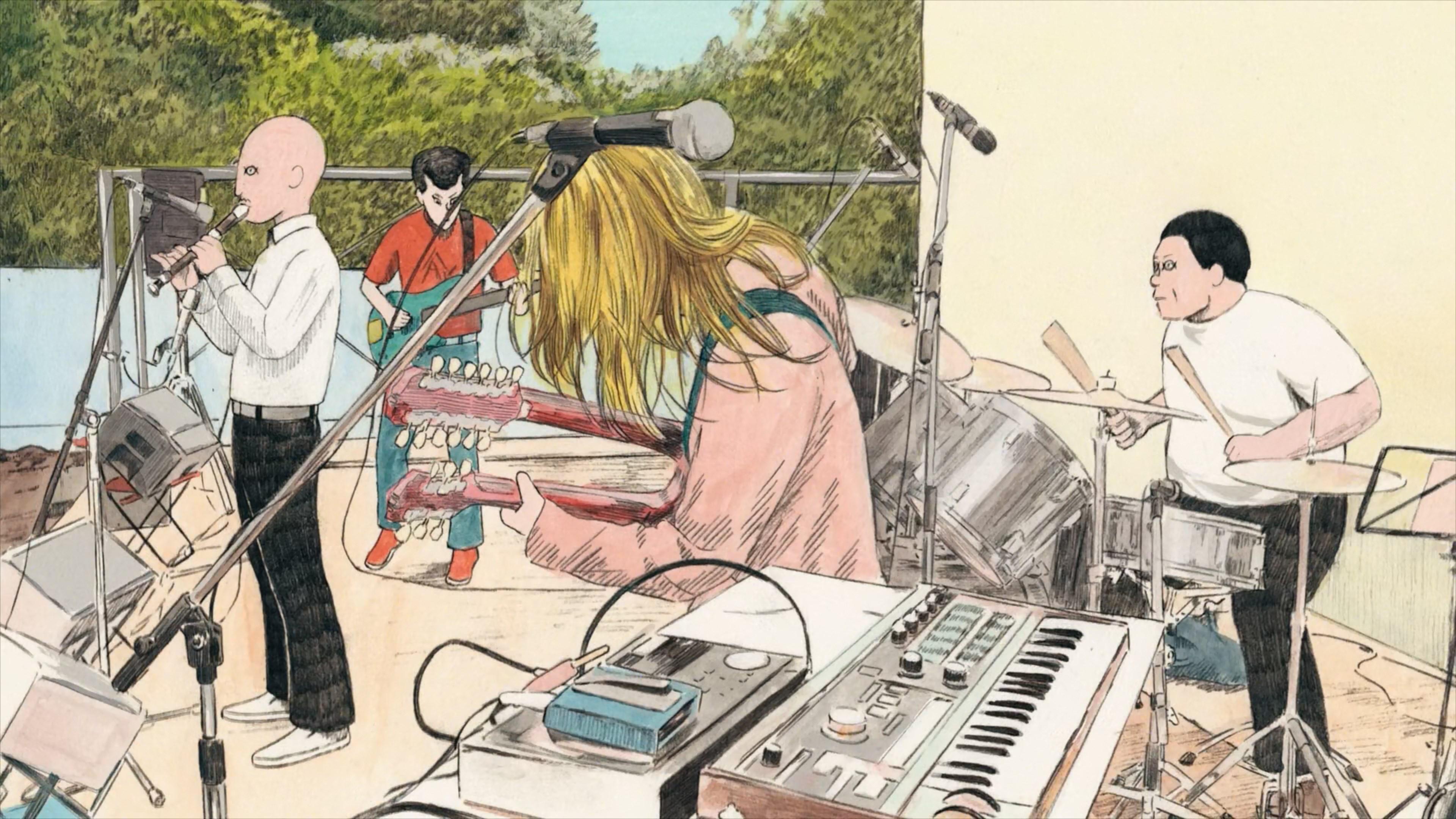 10 years ago, director Kenji Iwaisawa absentmindedly agreed to create a movie about a group of school delinquents absentmindedly becoming musicians. The result of its long production process was On-Gaku: an outrageously funny deadpan comedy, which will encourage you to create as recklessly as its team and characters did.

Around the much-awaited—at least among animation fans—release of REDLINE on Blu-ray, a certain meme took off in specialized sectors of the internet. To this day, studio Madhouse’s official blurb on the movie still points out that its production spanned an extraordinary 7 years, amassing 100k stunning drawings in the process. The quote was for the most part not fully understood, as many people assumed that they meant 7 entire years of active animation process, but the all-caps sentence 7 YEARS HAND-DRAWN had such a nice ring to it that it essentially became REDLINE‘s unofficial tagline. Ever since then, it’s been repeated over and over, and people will amusingly apply it to all sorts of impressive feats of animation with a particularly long production process; it doesn’t really matter whether the likes of Kizumonogatari or Children of the Sea really hit that magical number, animation fanatics gladly welcomed them into that select, completely arbitrary group. Now, imagine the smile on their faces when a very impressive indie effort due to release in 2020 popped up while genuinely using 7 YEARS HAND-DRAWN as one of the major points in its promotion.

That movie was On-Gaku: Our Sound, an independent effort led by director Kenji Iwaisawa that got out of hand in the best of ways. The film stars a group of school delinquents who haphazardly start their own music group, and rather than stick to a moralistic angle about the necessary effort and planning to achieve success, its humorous story celebrates the creative process as something driven by nothing but passion and instinct. That underlying message is not something that Iwaisawa necessarily had in mind when he began the project, but rather a conclusion that seemed to naturally surface as he began adapting Hiroyuki Ohashi‘s original comic. Not only do the director and the protagonist happen to share the same name, but they also approached their challenges with the same blissful ignorance—and in the end, they succeeded all the same. It only took 10 minutes for Iwaisawa, who was in the midst of a casual conversation with producer Tetsuaki Matsue about how much he enjoyed Ohashi’s works, to get this project going in June of 2012. And to be fair, that sounds like 10 minutes more than On-Gaku‘s Kenji would have spent.

Iwaisawa didn’t have much of a specific goal when he started the project, but he did envision a lifelike musical performance in contrast to Ohashi’s thoroughly deadpan delivery. For it, he would employ an actual band and make use of rotoscoping, a technique that he had used in previous works. His background isn’t that of your traditional animator, lacking both the technical ability and the connections to surround himself with professionals from that field. Leading an independent project like this, he didn’t have to budget to pitch the project to right about anyone either, so he ended up surrounding himself with other animation amateurs whom he tried to explain his workflow to; one that, to be honest, didn’t have all that clear himself. Unsurprisingly, the outcome appears to have been kind of a disaster, as the crew that he gathered in 2013 essentially disbanded by the next year. Not everything went wrong, though: the director did secure some funds through the Japan Media Arts Festival Creators Support system in 2015, and this experience also helped him realize that he was better off using rotoscoping techniques for the entire movie, as newcomers to animation might come to grasp with movement better if they have those immediate references.

The workflow he settled on isn’t all that dissimilar from other rotoscoped animation. Iwaisawa personally filmed actors for every single shot, making them wear wigs and relevant props as the silhouettes are very important to animation, which would then be exported as 10~12 fps video and edited as needed. The movie never had a real script, but rather a storyboardStoryboard (絵コンテ, ekonte): The blueprints of animation. A series of usually simple drawings serving as anime's visual script, drawn on special sheets with fields for the animation cut number, notes for the staff and the matching lines of dialogue. More in a constant state of revision; he first drew it according to the material of the comic he wanted to include and the original sequences he came up with, and then would go on to redrew it multiple times as the process of filming and animating the movie refined his vision. After removing the irrelevant backgrounds from the real footage, those would be traced into realistic roughs and then into stylized key animationKey Animation (原画, genga): These artists draw the pivotal moments within the animation, basically defining the motion without actually completing the cut. The anime industry is known for allowing these individual artists lots of room to express their own style., the most important process in On-Gaku‘s unique blend of styles. Eventually, those lines are cleaned up and digitally painted, before being composited over the background art. It’s worth noting that there’s an exception to this: the animation for all the performances and special sequences is actually painted by hand, something you will essentially never see in commercial animation anymore. Fortunately, rules and the tyranny of technological advancement don’t necessarily apply to indie efforts.

By tracing real actors, this rotoscoped animation is very grounded and thoroughly articulate. On the other hand, Ohashi’s style is deliberately simplistic, and a big reason why his near surreal deadpan humor is so effective. Iwaisawa was always going to weaponize the contrast, given that the first scene he envisioned was the bizarrely cool climactic performance, but he stumbled into a unique blend that makes every single sequence in this movie very amusing to experience. Watching characters with such stylized forms and low line-count move as convincingly real people is inherently amusing, which is exactly the right way to translate an author like Ohashi—who shares many qualities with Mob Psycho‘s ONE—into animation.

Iwaisawa makes sure to never sacrifice the off-kilter charm of the source material—if anything, he’s glad to add to its quirkiness. He has admitted that he’s a big fan of directors like Takeshi Kitano and Mamoru Oshii who will hold onto bold silences to build up tension, increase the solemnity, or even deliberately put the viewer in an awkward position. In an outrageously funny movie like On-Gaku, though, these long pauses are used from the very beginning to make delayed punchlines even funnier. As expected from a movie about guys who randomly decided to make music, and a director who agreed to a project he had no idea how things would work out, On-Gaku is the ultimate head-empty movie; and as it turns out, lots of thought have to go into making that too!

In the end, this movie’s success is not proof that this is the way to create animation, but rather that it’s a fun way to. For many creators, moving forward with no real plan would be akin to torture, and even someone like Iwaisawa for whom this approach is natural struggled a lot to finish up this project. He had to change direction multiple times, and his progress was far from smooth; we can now laugh that it fulfilled the 7 years prophecy of animation greatness, but he has admitted that he wasn’t even half done by year 5, assuming that this would be a 10-15 years endeavor instead. By now, Iwaisawa is already working on two new works; one follows similar production patterns as On-Gaku, while the other one is another fully new approach that he’s sure to stumble throughout but ultimately enjoy. If you’re a fan of animation, you owe it to yourself to keep an eye on him, and if you enjoy funny films, you should put both of those eyeballs to good use and watch On-Gaku. Fews movies are as funny as this one, and even fewer will encourage you to act recklessly as Iwaisawa and Ohashi did.