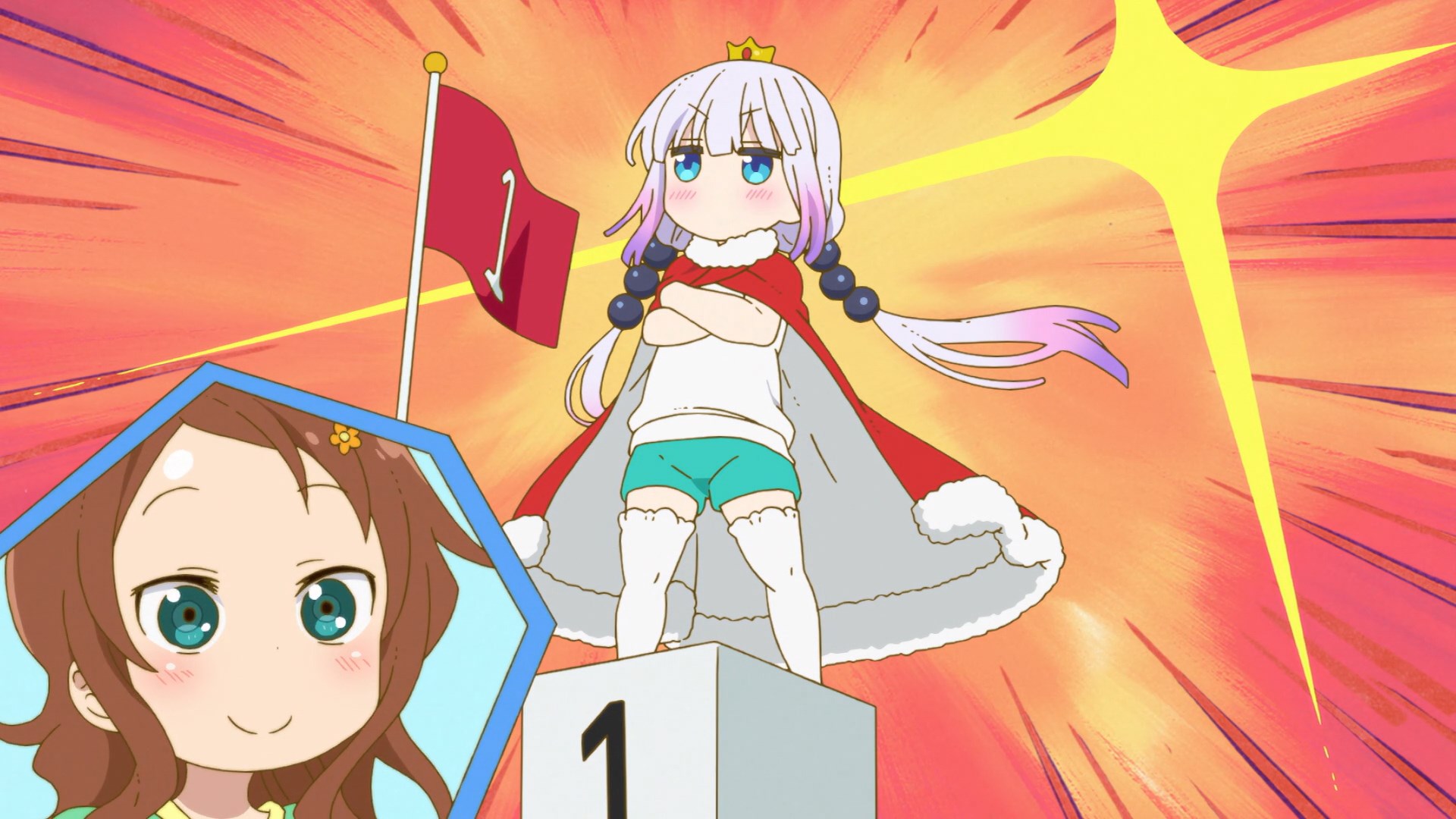 This week we got no poignant thematic moments, but this straightforward story has many sweet moments – within the episode itself, and on a meta level too.

— Shinpei Sawa’s storyboarding debut marks the end of his gradual promotion process, having now gone from a KyoAni School student to becoming one of their directors – thus reaching the peak, unless he intends to become a series director in the far future. The rise of new directors at the studio is quite the rare event since there’s a very limited space, so we’ve been lucky to capture Sawa’s process exactly as it began during our coverage of Euphonium Season 2. Some scenes make his preferences crystal clear: as a fan of monumental creatures and imposing designs, he makes sure to focus on the scale and majesty of the dragons whenever he can. I have to say though, the episode as a whole was a surprise. His focus on gestures and body language is understandable considering who surrounded him when he matured, but I didn’t know he had something this sweet in him; nothing about it was particularly unique, yet he felt very natural and sincere working with this material. While Sawa might remain a hectic animator at heart, lately he’s been making it clear that he’s capable of more. That said, Kanna saying she wanted some real action after holding back felt as is Sawa himself was proclaiming it!

— Strong delivery for a newbie! Framing Kanna and Saikawa’s feet as a heart, establishing the presence of Tohru’s tail meat well before the recurring gag but drawing no attention to it, just a lot of small details enhancing the episode. Simple work done well.

— Yuki Tsunoda was the main animation director this time around, following her trend of polished work without much of her own personality; this isn’t to say the characters themselves are lifeless, just that I still can’t quite pinpoint her style. Yuko Myouken joined the episode to assist her, which makes sense since she has no upcoming work whatsoever – she’s got no more episodes to supervise herself and the studio has no immediate preproduction duties for her either. We might see some more loose animation directors coming to assist in the next weeks.

— I find Shouko Ikeda’s appearance the most amusing, though. She had been busy for a very long time with Euphonium, but it seems like she’s finally wrapped that up so she could sneak into at least one episode of this show. Ikeda had commented that her children love Maidragon so she wanted to animate some of it, and she finally got a chance to…in the episode that happens to be about a mother putting extra effort to finish her work and be there for her daughter. A very cute story that honestly no one could have prevented; Ikeda is one of the company’s actual leaders, so if she wanted to draw some damn dragons for her children no one was going to stop her.

— The animation is quite reserved overall, following the general trend of the episode. Good expressions, long sequences with thorough body movement and strong layout work, plus Sawa having fun with some sequences here and there, particularly around Saikawa who keeps on being a perfect excuse for cartoony shenanigans. It was a solid yet unexciting energy-saving episode. Anything was going to pale in comparison to Nishiya showing off last week so I’m fine with this.

— Quick note on the key animators: the staff formatting makes my job very easy this week! The episode had 4 regular key animators, with Sawa helping them and personally drawing some cuts. Rie Sezaki joined Mariko Takahashi for the clean-up duties; she stepped down from animation direction work much like Takahashi had done in the past, and now they put their polishing experience at the service of younger people. Also, I have to say that small and clean credit lists like this feel like a blessing after a certain other show.

— I bet you haven’t heard this one before – this show’s backgrounds are beautiful. And since I’ve been trying to highlight other nice work by the art department besides the pretty scenery, how about some random nice artboards.

This episode was a bit too static imo. Lots of pans and speedlines but no actual animation. Also I wonder, are the backgrounds digital or watercolor? That last scene with them in the park had a very nice palette.

This show is painted, a change of pace for them since they had been focusing on digital backgrounds as of late.

I’m glad he fared well, though I suppose it’s not surprising! As an animator he already conceptualized the events in very effective ways, now he’s just expanding that.

I wonder which cuts Sawa animated.