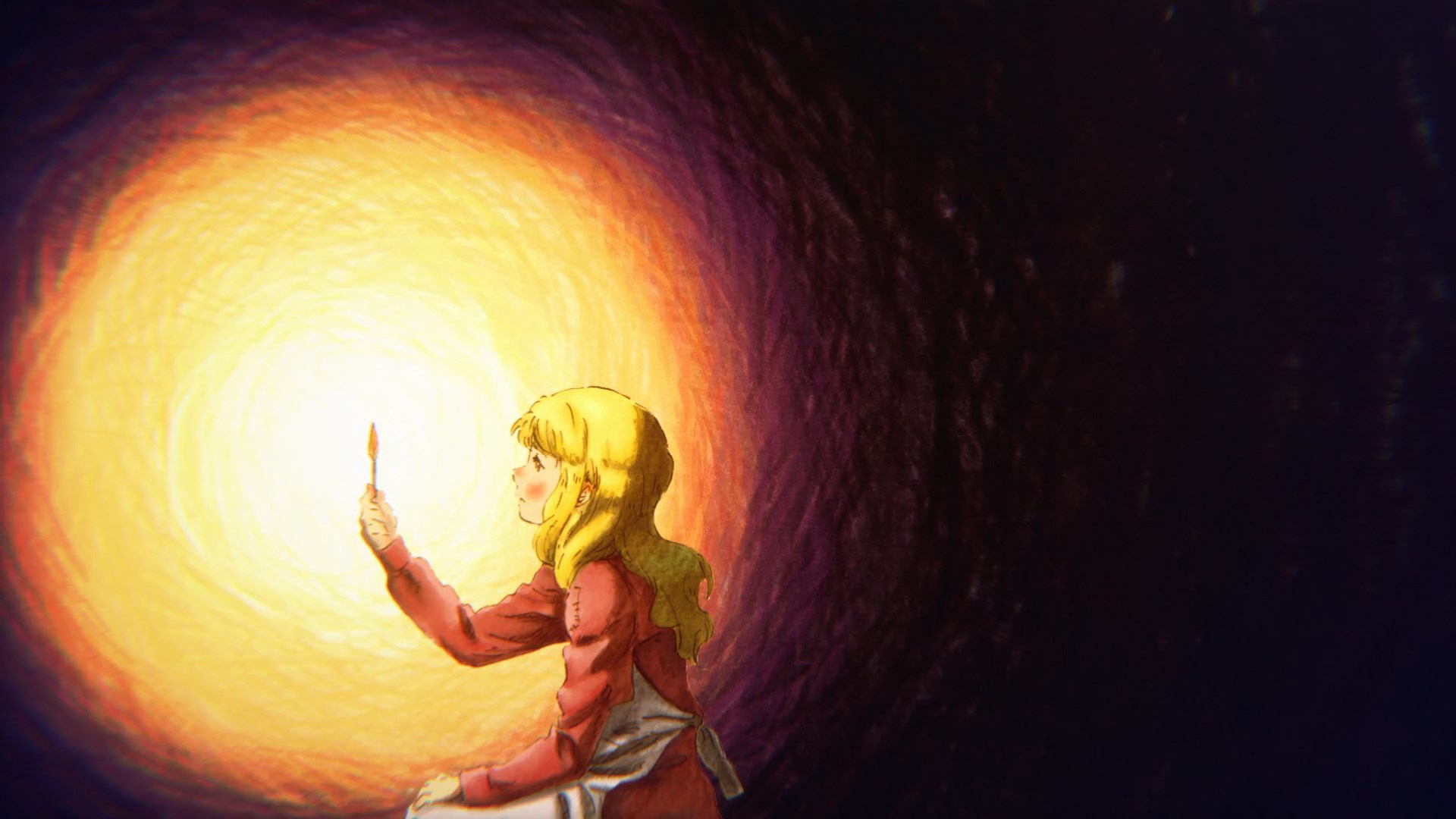 A silly and sweet Christmas episode that happens to be a low-key visual spectacle. Plenty of production goodness to highlight this time!

StoryboardStoryboard (絵コンテ, ekonte): The blueprints of animation. A series of usually simple drawings serving as anime's visual script, drawn on special sheets with fields for the animation cut number, notes for the staff and the matching lines of dialogue. More: Tatsuya Ishihara
Episode directionEpisode Direction (演出, enshutsu): A creative but also coordinative task, as it entails supervising the many departments and artists involved in the production of an episode – approving animation layouts alongside the Animation Director, overseeing the work of the photography team, the art department, CG staff... The role also exists in movies, refering to the individuals similarly in charge of segments of the film.: Haruka Fujita
Animation DirectionAnimation Direction (作画監督, sakuga kantoku): The artists supervising the quality and consistency of the animation itself. They might correct cuts that deviate from the designs too much if they see it fit, but their job is mostly to ensure the motion is up to par while not looking too rough. Plenty of specialized Animation Direction roles exist – mecha, effects, creatures, all focused in one particular recurring element.: Kohei Okamura

—  At this point in the series it shouldn’t surprise me, but the amusing set-up and ridiculous performance of the play lowered my guard, then made the sweet payoff all the more effective. Lucoa’s presence feels at odds with the tone of episodes like this, but otherwise this episode is another highlight in this bizarrely sincere and warm family story. I believe it was original content, which is the field where the series has shined the most; I don’t mean this as criticism of a manga series that I already was fond of before, but whenever the anime’s restrains are off we get some truly special work.

— Tatsuya Ishihara storyboards under the direction of Haruka Fujita immediately reminds me of the premiere of Euphonium S2, since that was the exact lineup for its second half. This might be the most fitting material for Ishihara in quite a while, as this sort of ridiculous lighthearted comedy is entirely up his alley; the manzai-esque routines will annoy many viewers, but this is the kind of timing where he feels most comfortable. I wouldn’t trust the show to have this much heart if he were the one leading the project instead of Yasuhiro Takemoto, but within this established framework he did very well.

— That said, Fujita steals the stage with ease. The performance is a fantastic sequence that nails the feeling of hastily made, believable in-universe props and stage working alongside actual magic – quite the tricky business! It’s the final scene where Fujita’s style is most apparent, though. Conceptually it’s in line with the show’s usual material – yet another beautiful bonding moment for Tohru and Kobayashi – but the execution sets it apart. As I’ve mentioned before when it comes to young KyoAni directors, it’s often easy to notice them due to their fondness of intricate postprocessing. This usually clean series suddenly features a scene that could look straight out of Euphonium if it weren’t for the rather different style of background art.  Pretending that a strong photographyPhotography (撮影, Satsuei): The marriage of elements produced by different departments into a finished picture, involving filtering to make it more harmonious. A name inherited from the past, when cameras were actually used during this process. sense is all there is to Fujita is selling her short though, as her usage of color stands out just as much. I’ve been noticing her predilection for blues and purple tints over the last few years, always achieving a pleasant balance of cold and warm colors. Her debut as series directorSeries Director: (監督, kantoku): The person in charge of the entire production, both as a creative decision-maker and final supervisor. They outrank the rest of the staff and ultimately have the last word. Series with different levels of directors do exist however – Chief Director, Assistant Director, Series Episode Director, all sorts of non-standard roles. The hierarchy in those instances is a case by case scenario. can’t come soon enough.

— My relatively low expectations for the animation were proved wrong, which is always a nice feeling. There are no mind-boggling isolated setpieces so I don’t expect people to be particularly impressed by the episode, but the sheer amount of it and more importantly its smart usage gained all my love. It lives up to the healthy baseline of character acting you’d expect from the studio, and recurring tricks like constant smears to denote nervous overgesticulation make a return. If I had to choose a keyword though, it would be flair. There is no real need to actually animate effects for snapping fingers. Taking absolutely every excuse to draw neat 2D effects for tiny cuts isn’t an actual requirement. But as I’ve been mentioning on the LWA write-ups, nothing beats the sense of cohesion of an animator drawing unique effects that feel like they belong in that scene. During the play you get to enjoy cool sequences of hand drawn FX that feel powerful but still convey that the dragons are holding back. If we were machines that simply absorbed the narrative as an inert list of events that would have no effect, but I want to believe we’re better than that.

— While there’s none of the big names, the animation director Kohei Okamura was supported by a solid team of young artists. I don’t think he has quite mastered space in layoutsLayouts (レイアウト): The drawings where animation is actually born; they expand the usually simple visual ideas from the storyboard into the actual skeleton of animation, detailing both the work of the key animator and the background artists. yet, but consider that a minor issue. Rather than the main key animators though, what stood out the most was the clean-up assistants; Rie Sezaki and Mariko Takahashi helped for two consecutive weeks, proving that they really were helping out simply because they had nothing else to do. When the studio arrives at the end of a production run like this, without immediate projects afterwards, the Key AnimationKey Animation (原画, genga): These artists draw the pivotal moments within the animation, basically defining the motion without actually completing the cut. The anime industry is known for allowing these individual artists lots of room to express their own style. units system loses a bit of relevance. If all your key animators are full-time employees and they have no work scheduled to do, they might as well help out their peers who are finishing their assignments.

— Special shot-out to Akiko Takase, who also did some clean-up work. She had disappeared from this series early on, presumably to supervise the new Violet Evergarden commercial that aired alongside this episode. It feels as if she’s taken a page from Futoshi Nishiya’s book when you look at the softness her drawings have gained, so while it’s a bit more restrained I actually prefer this new CM over the original one. Chances are we won’t see the project until fall season if not later, but she sure is making it look appealing.

— And speaking about the staff and behind the scenes moves: the show has been fully animated for a while (I believe the new Evergarden CM was animated after that, even). Not only that, but the production is so done that basically all animators are on vacation. Maidragon has been a rushed project by KyoAni standards, but it’s still quite the contrast to see them going on holidays overseas and to visit their families one month before the broadcast ends, when most TV anime will fight until the last day.

— If I haven’t been able to convince you that this show’s backgrounds are excellent after hammering the point for 10 consecutive weeks then nothing I can say will change your mind. This time I’d like to highlight the Little Match Girl tale segment though, since that’s where the art department had a field day. Striking color work, and yet another way for the show to expand its visual range further.

Any source on the animators being on vacation?

I’m not really surprised by it (being that it’s KyoAni), but I’m still continually pleased by the little flourishes of character animation. I don’t know why Fafnir’s sneer when the smoke clears in this episode’s play was so striking to me or why I keep thinking back to that background mob’s snort of repressed laughter when the corrupt manager first trips in episode 5, but things like that are really sticking with me. Maybe I’m just too easily fascinated by inconsequential details, but I feel like those things hit above their weight class when it comes to reifying the characters… Read more »

I really believe it’s the accumulation of those details that brings things to life – layouts filled with more than is absolutely necessary, gestures, nuanced character animation, world continuity beyond the camera’s eye…