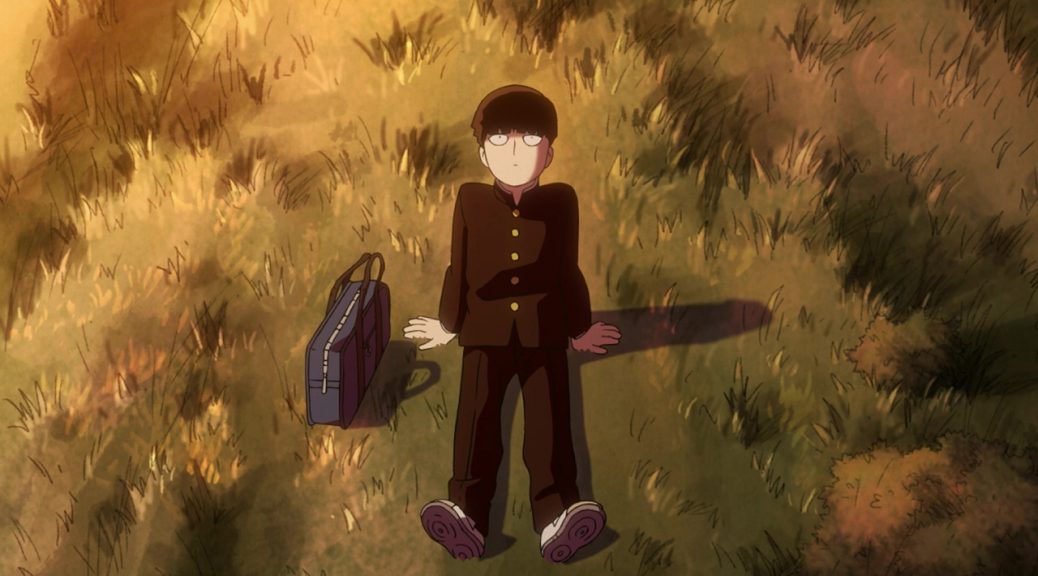 ─ There’s a tendency among anime sequels to either start with a recap of sorts to refresh people’s memories, or to return with a bang that reminds people why they liked the series in the first place. Either way, the goal is showcasing the show’s best qualities, both narratively and production-wise, to hook in returning fans and perhaps spark interest among some stray newcomers. So what is that ingredient that attracts people to Mob Psycho 100? It’s not unfair to say that the anime’s well-known first and foremost for its spectacular psychic action, even if it’s the emotional backing of those conflicts and the lovable cast that grows throughout the series that made tons of people stick to the series. Did we get a bombastic action start to this second season, then?

─ Well, not really. The staff opted by a premiere that spent most of its runtime with a standard middle school tale, focusing on Mob’s emotional struggles in an environment with lower stakes than usual. But don’t get me wrong: while the action and psychic power shenanigans that many fans love became a mere backdrop for this story, the episode presents the heart of Mob Psycho 100 as clearly as possible; the message fostering empathy that starts with learning to be considerate of one’s own feelings is what the series is all about, so even though this wasn’t what some people expected, I’d say it was a perfect, beautifully bittersweet reintroduction. Seeing Mob face down-to-earth problems rather than going all-out with the supernatural confrontations felt nostalgic after such a long break, but at the same time like a breath of fresh air after the action-packed final arc of the first season.

─ Because of the nature of this episode, the grand spectacle took a step back in favor of more sleek and nuanced storytelling. Lighting and the appealing backgrounds, with the return of art director Ryo Kono alongside studio Lagurus, took more of a protagonist role than usual. It was their turn to showcase the world surrounding Mob and Emi, mirroring the atmosphere that dyed their interactions as their relationship went through different phases. The transitions between scenes and overall tempo were smooth and when it wanted to land a joke, the show relied on some unusual visual tricks, such as brand new pixel art by Tomomi Umezu – amusing diversions, but nothing too ostentatious to avoid clashing with the overall tone of the episode. 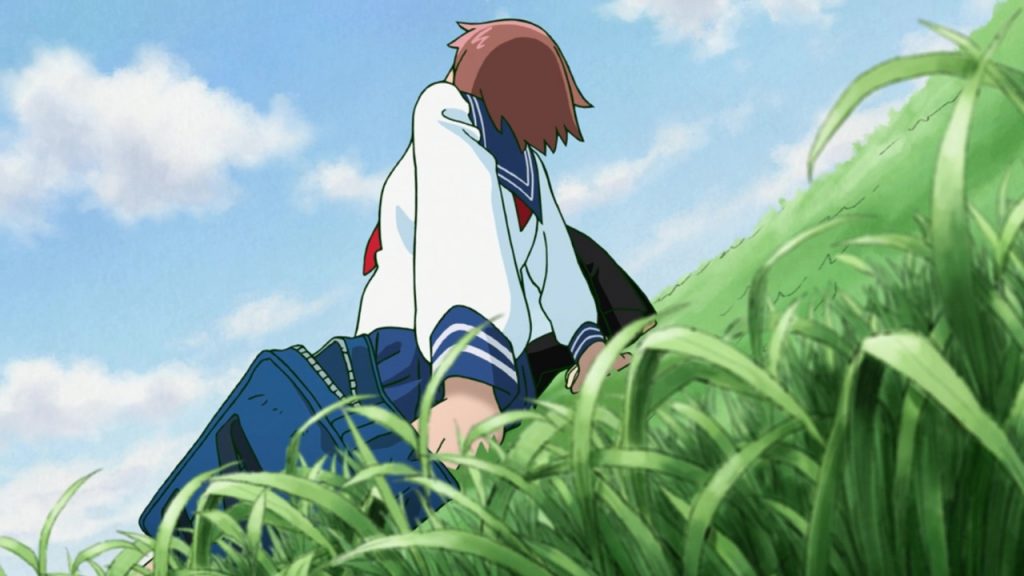 ─ What might come as a surprise is that the series director Yuzuru Tachikawa didn’t storyboard and direct this premiere himself, instead leaving the job to other returning staffers. This episode’s storyboard artist was Takefumi Anzai, who worked closely with Tachikawa on season one and most notably storyboarded and directed the penultimate episode. Right now it’s unclear whether we’ll see more of his work on this show due to the fact that he’s having his full-length series directing debut with next season’s Hitori Bocchi no Marumaru Seikatsu anime, but if we take into consideration just how early the storyboards were drawn, it’s possible that he handled a couple more episodes. And for those of us who loved the episode, that’d be good news! It’s reassuring that regardless of the exciting new members joining the crew, Mob Psycho 100‘s already built a capable team they can always fall back on; look no further than episode director Yuji Oya, a former BONES production assistant who debuted as director on season one’s breathtaking episode 8. Nice to have him back too!

─ Speaking of the returning staff, paint on glass specialist Miyo Sato is also back to Mob Psycho 100… but funnily enough, her reappearance didn’t rely on the technique that made her turn heads all over the world during the first season’s broadcast, despite being mistakenly credited for it. So, what was her unique contribution to this episode all about, then? Unlike her manufacturing process, the answer’s simple: sand. Indeed, her short cut was animated by the painstaking act of moving pigmented sand over glass. The result was a neat sequence where Mob’s mind went blank, as did his entire existence.

─ From a purely quantitative animation standpoint, the episode was on part with the more conservative efforts of season one. It’s fairly unusual for a first episode to get the short end of the stick when it comes to the allocation of resources, but I believe there’s a good reason behind it which we’ll see in the upcoming weeks. Thankfully, Mob Psycho 100 still lives up to its reputation of maintaining a very respectable quality threshold even at its least spectacular. Kanako Yoshida returned as animation director – not a coincidence, considering that she’s very trusted by the character designer Yoshimichi Kameda; as a character acting specialist, the content of the episode was a good match for her skills to boot. The animation highlight of the episode coincided with the emotional climax: a 9 seconds long cut animated by Itsuki Tsuchigami. He was working as a regular animator on the show for the majority of last year, so we can expect more great stuff from him in the upcoming episodes!

─ This new opening is the very definition of living up to the expectations. Being a spiritual successor to the first one both musically and visually, the whole sequence turned out to be an exhilarating showcase of things to come in this second season. It’s no secret that Mob Psycho 100 is a celebration of animation and the medium’s possibilities, which Tachikawa used as one of the opening’s major themes as well. The opening toys with classic, even pre-film animation techniques like the zoetrope and barrier-grid animation, while at the same time experimenting with modern apps like Olli to filter film footage and CGi – the entire sequence is a barrage of ideas that avoid the standard trappings of TV anime openings. And just like its predecessor, the opening ends exactly as it begins making it a perfect loop!

─ Since we’ve mentioned some of the newer techniques used in the opening, it’s worth noting that while Mob Psycho 100 is one of the rare shows these days that avoids using any 3DCG during the production, studio BONES’ CG department did work on this sequence for a change. Modeling and animating that zoetrope segment is a very curious first – and likely last – contribution to the production, but leaving their imprint with such a unique shot isn’t exactly a bad experience.

─ And of course, there are plenty of hand-drawn animation highlights to find in this opening too! The domino made of characters was presumably animated by the aforementioned Kanako Yoshida, once again highlighting her specialization in character animation. Mob’s face being disassembled and reassembled was animated by Yuuto Kaneko, whom I consider to be the most talented disciple of TRIGGER’s beloved Yoh Yoshinari – and a sequence that blurs the line between character expression and 2DFX definitely plays to the skills he learned from his mentor. The animation stars from the recently finished ANEMONE movie also joined the fun: effects specialist Hideki Kakita animated the explosion after a tank truck crashes into a skyscraper, while Kanada-inspired animated Nobuaki Nagano handled the following cut of Sho jumping towards *** ******. The callback to Yoshimichi Kameda’s scene from the first PV, which was then reused in the first opening, was probably animated by the man himself once more.

do you know how many episodes this will have? since the manga finished in 2017

Can’t say since it hasn’t been announced, but there will be 13 weekly Mob Psycho 100 S2 posts

I remember S1 having some heavy ghosting during fight scenes so I pray we get this one without any of it.

First of all, thank you very much for this article. I really enjoy all your posts about Mob Psycho 100. Your blog is really amazing.

I found this on Mob Psycho 100 discord. Credited to instagram account tiffany.pai. The part of barrier-grid animation in the OP, it actually worked! https://streamable.com/b19ff