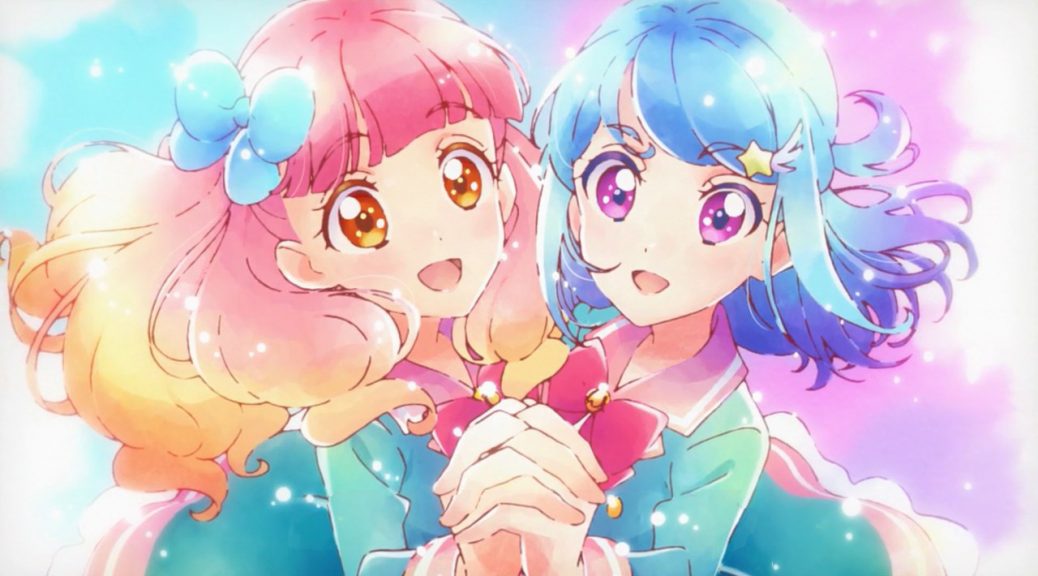 Get your cards at the ready and climb a mountain for good measure, because Aikatsu Friends! coverage is back! And there’s no better way to return than with a look at the new season’s fantastic opening episode. Enough said, though. It’s time for some passionate blogging activities!

– There’s no reason to hide it: this episode rocked in the most Aikatsu! of ways possible, and a lot of that can be attributed to the much-anticipated return of Teruo Satou. A longtime participant in the production and capable enough to be placed on the director’s seat for Aikatsu Stars!, who ventured off once that job wrapped up to take up the role of chief unit director on the recently screened City Hunter movie alongside Takahiko Kyougoku — Land of the Lustrous‘ series director, and one of the busiest directorial mentors in the industry. Whether or not Satou’s back for good is up in the air, but there’s no denying the series will benefit if he is. Moreso if he’s brought Kyougoku back with him again as well!

– If you want a primer on his style, then there’s honestly no need for me to say anything. Just go (re)watch Aikatsu! #159. Done? Great! Now let’s take a look at it in the context of this episode. The intro scene isn’t just hilariously reminiscent of your name, but stresses the importance of the titular jewels right off the bat. That, in conjunction with space idol Hibiki casually descending from orbit like it’s just another day does a, er, rather good job of setting the tone for both this episode and potentially the season itself. And unless the dictionary definition of subtle was updated recently to include parachuting from the heavens and being likened to a blazing phoenix during your formal introduction, then her overwhelming presence is meant to slap viewers over the face. Much like a certain other giga idol, though the immediate contrast there is in how Hibiki can afford to be presented as more silly and over the top, to the point where even her attendants play off of it, whereas Elza sometimes felt like she would stage a coup in the name of passionate idol activities.

– One of Aikatsu!‘s biggest strengths is in the balance between the crazy happenings and quieter moments, an aspect of the series that Satou has always played to well. A brief first glance at Alicia tells us all we need to know about the sort of character she’ll be and how the show will approach her, and for all the silly Hibiki related antics through the episode, the lead up to her performance takes on a much different, yet equally intense tone to match this other side of her. What genuinely wow‘d me, though, was the morning scene before the opening; not just through the delightfully rich character animation and depiction of the morning glow, but in how it portrays two very different scenarios in the Yukine household. It’s just another morning for the family as they go through their regular routines and enjoy a simple breakfast, but then we cut to Aine. While she preps herself in the mirror in true series tradition, that same lively animation and lighting takes on a new meaning as it gets across how special of an occasion this is not just in the context of the show itself, but also for her personally as she excitedly gets ready for her first day of highschool. Not an easy feat to accomplish! 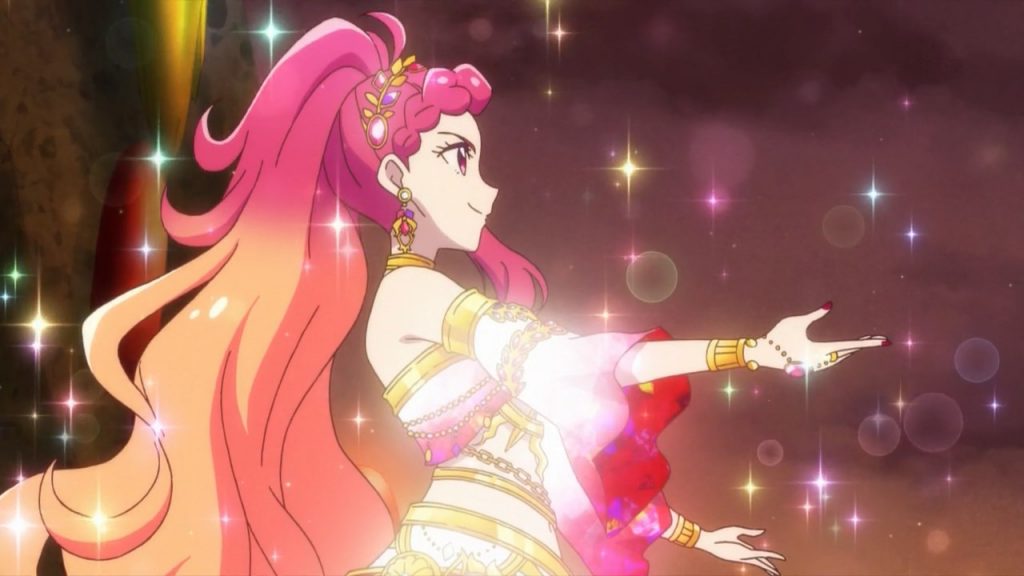 – If your lasting memories of Stars! are its spectacular finale, then chances are you enjoyed this episode almost as much. Because much like how when the outro fades out, the intro flows in, the same duo tasked with sending Stars! off were also the ones to start a new chapter in the history of Friends! With that said, this is my chance to come clean and admit that Satou isn’t who I want people to come away thinking about most after reading this. His effect on the series can’t be understated, but if anyone deserves the spotlight shone on them right now, it’s Tatsuya Akitsu. One of the most exciting prospects on the series itself, the industry in general, and an almost guaranteed candidate for an anime’s future post, it’s his presence on the episode that helps Satou’s vision come together as well as it did.

– It’s only fair to show the receipts to back up a claim like that, but thankfully Akitsu makes it easy. Strong animation directors are a key component to any production, and the more registers they’re able to deliver on, the more sought after they’ll be. It’s no coincidence then that Friends!‘s most memorable episodes have made their way into his hands, earning him the trust necessary to give some of its pivotal moments the weight they deserve. And in the context of this episode, he played that role almost to perfection not just in his supervision, but by personally animating the morning scene mentioned earlier. His name is easily one of the handful on the show who can make it obvious at a glance that Momone’s starting to grow up much in the same vein as Raichi and Noel did, but I’d also like to address how he gives Aine’s new hairstyle enough volume to really feel like the big fluffy marshmallow it looks like.

– As implied though, drawings with striking detail are just one weapon in his arsenal. What’s won me over most about his work is how it almost feels like the embodiment of Aikatsu! itself. Maybe a bit too grand of a statement, but the level of personality you’ll find all throughout this episode, even in the long shots, feels like a valid argument for it. He’s so perfectly in tune with the series that the transition from Hibiki’s burning introduction to this sequence full of snappy timing and all that personality mentioned doesn’t feel the least bit out of place — if anything, it only helps establish her identity! And the same happens again when her performance and the aftermath is followed by a comical fight between her and Mirai, the second half of which he animated while good friend Takahiro Ookawa handled the first half. Special props to the latter for delivering the good content, too.

– It’s always nice to highlight which animators were responsible for which parts, and thankfully the Aikatsu! crew like to be open about that. Risa Miyadani gets the biggest mention as she joined the exclusive crew in charge of animating the show’s iconic lead-in, which feels like extra evidence towards what I’ve said about her previously. Going in order of appearance from here, we have Taeko Mitsuhashi in charge of the scene where Pure Palette and Honey Cat welcome all of the 1st years to the academy, while series veteran Shigeki Iwasaki handled Hibiki’s impromptu boat ride.

– The aforementioned mentioned Ookawa shared some funny trivia on his scene, particularly in how it was Shigeki’s decision to implement background animation, but was also curious if it would be better to add some onlookers in the process as well, to which Ookawa jokingly said yes. And then the madman actually went and did it! Following that we have Takeshi Morita taking up dress room duty once again, which would explain the flames feeling so familiar. And since we’ve already covered what Ookawa and Akitsu did, last up is Takuya “Kuerun” Miyahara, who closed out the episode with a firm Ai-Katsu!

– I’d just like to end with a note that, while it’s been some time since the show last saw some coverage, Aikatsu Friends! has by no means been a weak production so far. Normally we like to do a recap of what we’ve missed to keep everyone up to date, but a new season felt like as good an opportunity as any for a fresh start after so long, not to mention that this episode gave us enough to savour as it is. Thankfully the show has enough interesting people on it that we’ll eventually have an opportunity to revisit past episodes anyway, so look forward to that! 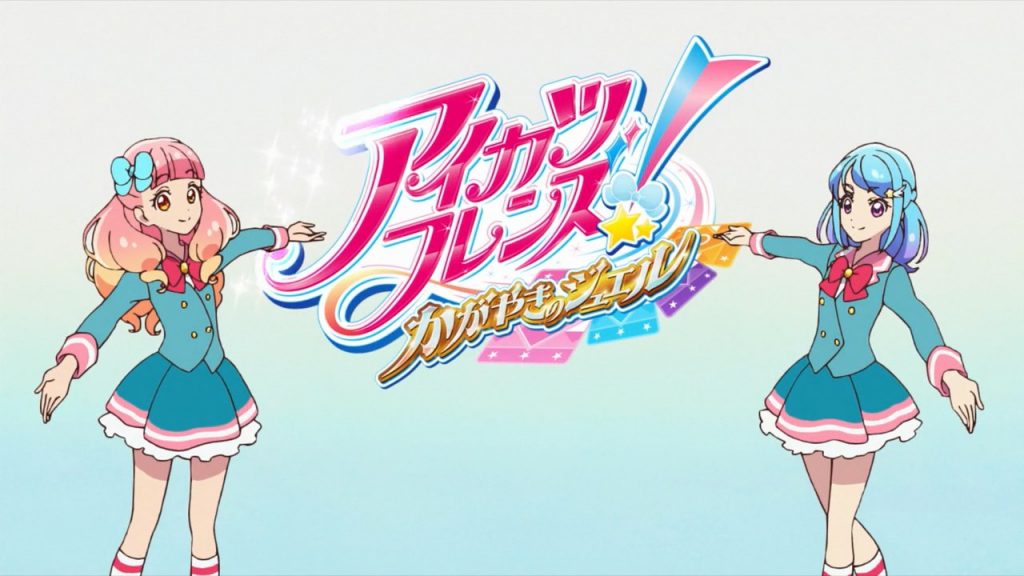 – Though I’m firmly in the camp that feels Friends!‘s openings haven’t been quite as memorable as its predecessors, I also think they’re still comfortably above par. As far as this one goes, the lovely FX work and rotation of its first scene help make a good first impression.

– The obvious elephant in the room is in their decision to drop the full CG endings, which took me by surprise since that felt like something the studio would stick with. There was admittedly a bit of disappointment at first with what they decided to replace it with, moreso when you remember that Kayoko Ishikawa is taking an active role on this season’s Sarazanmai, but that quickly disappeared when the stills were followed by a number of absolutely gorgeous harmony shots of the cast, drawn by character designer Satomi Watanabe and then painted by colorist Masumi “Banchou” Ootsuka. Absolutely more of this, please.