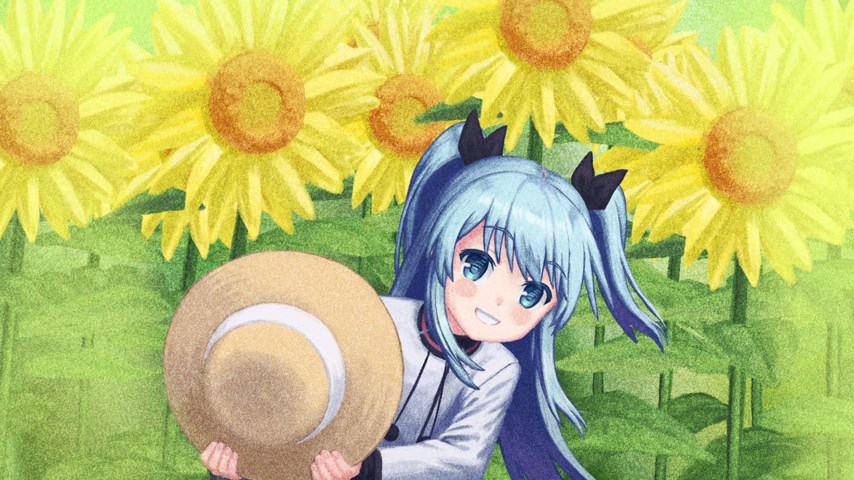 Celestial Method has, against all odds, seen a brief revival through its recently released fully original OVA. We’ve taken this chance to revisit the circumstances that lead to the show’s birth, what it means to 3Hz as a whole, and how the story that began five years ago continues to this day.

It’s only fair to say that studio 3Hz has become something of a cult favourite among animation fans over the past few years. Usually we’d preface that with a warning about treating animation studios as monolithic entities, but there’s no denying that the talent that’s been attracted over to — and subsequently away from — the studio has rightfully earned them a strong reputation. You’ll notice this attitude even among industry folks, particularly younger generations and those associated with them, as there’s always something of a buzz when a new 3hz project is on the horizon. Look no further than Black Fox, the studio’s TV show turned theatrical release, if you want a recent example of that. Even this season’s Rifle is Beautiful, a very modest production by their standards, has managed to attract some well-known stars.

As it happens, this isn’t a coincidence. 3Hz was born from Yuichiro Matsuka’s wish to start his own venture, which meant departing from Kinema Citrus, a studio he had helped co-found…and taking most of its young animation prospects with him in the process; not as a last resort mechanism, but rather to build an entire studio around these exciting animators and let them focus on original projects they could feel passionate about. That wish took the form of Celestial Method, an original anime conceived with those up-and-coming artists as its backbone. Yukie Akiya‘s experience on Kinema’s CODE:BREAKER made her a sure choice for the character designer and chief animation director roles, while others such as Mai Toda and ripa, who also stood out on the same project, were de facto main animators throughout the broadcast. The studio’s ability to attract outside sakuga maestros was already manifesting itself at this stage too, considering the show featured appearances from not just people like Masayuki Nonaka and Hironori Tanaka, but even the legendary Kou “Aninari” Yoshinari himself.

From a thematic standpoint, Celestial Method couldn’t have been more appropriate as a starting point for the studio. 3Hz’s story of wishes isn’t just a fancy post title; it’s the very core of the series itself, which aligned perfectly with the feelings at the studio. But at the end of the day, the clumsy narrative that surrounded that message and the sort of production quality degradation you’d expect from a first time showing prevented it from leaving the memorable impression they wanted, so surely that was going to be the last we ever saw of it… and yet here we are five years after the fact, with a special full-length episode on Youtube that not even an oracle could have been able to predict.

For all its flaws, Celestial Method is a show I was never quite able to forget myself, and I’d never really questioned why that was the case. Noticing my own anticipation in the face of this episode’s announcement, though, I got to thinking. Narrative-wise, its mid-season climax focusing on Nonoka finally coming to terms with the loss of her mother was a highlight, but that type of subject matter had already been a personal favourite of mine even before the show tackled it. There had to be something else, some merit that belonged to the show itself. And then it clicked.

2014 is the year where I started to take a more active part in discussions surrounding animation and the industry itself, and the birth of Sakugabooru a few months beforehand played a significant part in that. Actively identifying artists whose work I enjoyed and which parts resonated with me most while uploading gifs — particularly those from 2011’s The [email protected] — was a big departure from just quietly enjoying it all, and in doing so, also served to broaden my horizons. As fate would have it, it’s also the year where I, and many others, had our first exposure to the inimitable Ryouma Ebata through what I still consider to be one of the best ending sequences ever, which just so happens to belong to the very show we’re discussing. By this point I had gained enough confidence to take part in that year’s Sakuga Bowl, and unsurprisingly gave it my nomination for best ED of the year.

Though this isn’t a post on my personal history, divulging a little felt important in relation to its main goal. Because for all intents and purposes, I wasn’t alone. English speaking communities focused on sakuga discussion have grown at an alarming rate over the past couple of years, but there’s a core base of Japanese fans who have been at it for the better part of a decade, constantly intriguing and bringing new people into their ranks. And now the generational shift in the industry has progressed far enough that those same people, who have been making sakuga MADs and/or discussing their favourite scenes and animators through platforms like 2ch’s sakuga threads and Twitter, now make up a generous portion of names found within anime credits.

Of course, that’s not news in and of itself. We’ve discussed it plenty of times on this very site, even. But there’s a time where things come full circle, and Celestial Method‘s extra episode, aptly titled One More Wish, is a prime example of it. One peek at the credits says it all: a pretty fair balance between the old guard and youngsters who hopped aboard. As a JP friend so quaintly put it upon seeing them: “it’s like I’m just looking at my Twitter timeline.” JP sakuga Twitter star Kasen, Anima Lyon‘s very own parent Azure, avid Morinaka Kazaki fan Morio, and even Makaria affiliated Maring Song and Eri Irei — the former of which has unfortunately been drafted into the army for the next two years — are just some examples of the latter, who you’re more likely than not to find livetweeting shows with animation promise. Do a bit of digging and you’ll also find that some of them have been open about enjoying the show and the people that worked on it in the past.

Their involvement isn’t appropriate from just a sentimental standpoint either. Character work was a priority during its production, and that’s apparent right off the bat thanks in no small part to Keisuke Kobayashi and Hirofumi Okita. If there’s one way to set the tone for what’s to come, it’s by kicking things off with two masters of acting. Kobayashi himself makes a return after a one off appearance on the show previously, delivering the sort of hyper realism and true to life clothing folds that have come to be expected of him. What no one expected, though, was that the rest of this scene wasn’t actually penned by him, but by the aforementioned Okita. That’s not to say that realism is outside his realm of expertise, because it absolutely isn’t, but at this point we’re willing to believe that he’s some sort of chimera created to replicate and mix styles usually attributed to other specific animators with his own. Even Toda, who had departed from the studio, makes a return to provide some bouncy and joyful work, which is an absolutely valid form of expression in our books.

As you might suspect, those aren’t the only highlights to be found. In fact, there’s plenty of lively and interesting work sprinkled all throughout, and a big reason for that is that the current generation’s artistic pursuits are very much in line with what this episode seeks to achieve. Though there’s a sizeable amount of work that remains unsourced, we also know what a few of them were responsible for.

Among the few scenes handled by Song — who, incidentally, mentioned that this episode felt reminiscent of Yama no Sususme, another show that captured the hearts of younger artists — is one of my personal favourites of the episode, which goes the extra length to capture both Noel’s spirited personality and the relationship between her and Nonoka. Yuya Hiderita, who debuted last year and is already showing signs of promise, is presumedly responsible for Carol’s first fateful encounter with a branch. Nice attention to detail and some cheeky smeers are always appreciated, but if anything caught my eye, it’s her running motion that feels very reminiscent of the sort of gifs you see posted to Twitter by aspiring animators. Last, but certainly not least, is the delightful homage to Aninari courtesy of Irei and a little coating of digital paint, bringing this episode to a close in a similar vein to the show itself.

It’s through people like them that 3Hz’s story of wishes continues. A studio birthed with upcoming talent as one of its foundations, during a time where it had become easier than ever to inspire future prospects, bringing those now present prospects in to help contribute to the brief revival of the project that started it all. Feel-good moments in an industry like this are unfortunately few and far between, but at the very least we can celebrate them whenever they come around. That’s certainly what’s happened here, if you ask me.

Well that’s one way to get me even more hyped. I love “Sorameso” and was already pretty excited when this was announced but I didn’t actually expect anything with this kind of talent involved.

I don’t think anyone did, to be honest! Its existence alone is a surprise, but you won’t see me complaining.

I was under the impression that Japanese sakuga fandom has been around for even longer, at least based on what Otaku no Video tells us. I am curious about the history of sakuga fandom in Japan: are you referring to communities that are more formally organized around sakuga?

A bit of poor wording on my part, sorry for that. JP sakuga fandom’s definitely been a thing for longer; if we’re just talking about online, 2ch sakuga threads stretch back all the way to the early 00s, but the mid to later 00’s is when things really picked up. Everyone knows about the animator MADs these days, but back then the concept of MADs recapping interesting animation from the previous month started to really gain traction, not to mention ones that recapped the entire year. In fact, the very first sakuga MAD I watched was a 2008 recap (https://www.youtube.com/watch?v=y8JN10X6VJo)… Read more »

How is the sunflower scene done, is it with acrylic paint?

i simply LOVE this anime. i had just finished kobato, an anime that at the begining i droped after 2 episodes because i was thinking it was too childish for my age, then years later i gave it an second chance, started from the first episode i didnt thought it as so childish as i remembered, then a few episodes later i was like: oh my god, i cant believe i’m crying for an tree, and at the end i cried more than i ever have cried for an single episode of an anime (counting animes that i saw before… Read more »