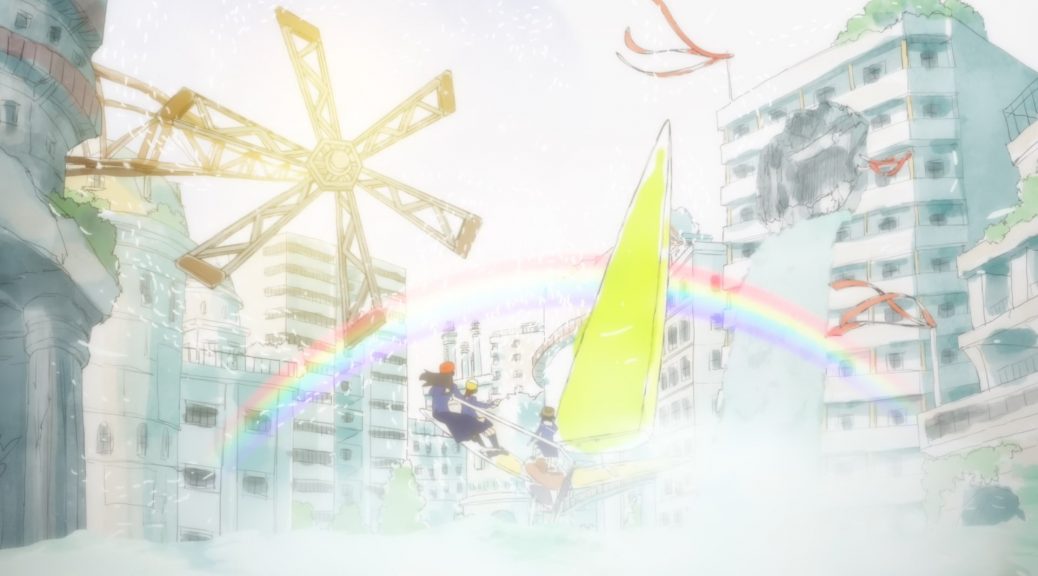 Keep Your Hands Off Eizouken! continues to showcase the magic of animation – though did you know that its deep understanding of the art form doesn’t come from just the fantastic anime team, but its original author too?

Many people will attribute Eizouken’s quality to Science Saru’s adaptation led by none other than Masaaki Yuasa, and frankly, why wouldn’t they? There’s no denying that this team is adding a lot to the experience, to the point where it feels like the full realization of its potential; a love letter to animation finally in the art form it worships, not out of obligation but actually making use of the medium in imaginative ways. It’s no wonder that the author himself is having the time of his life, enjoying his supporting role in the project… as well as the opportunity to follow it weekly as if he were simply a fan.

While all that praise is deserved, I’d be doing Eizouken a disservice if I didn’t point out that Sumito Oowara – the aforementioned original author – channeled his passion and knowledge about animation very successfully to begin with. Concrete examples of this are peppered throughout the show already. For one, the material covered in this second episode features a rather in-depth look at cel animation production, with two characters geeking out about relics from a traditional process that was no longer in broad use when Oowara fell in love with the medium. The mangaka mentioned growing up amidst the Haruhi & Lucky Star otaku boom, with Flash animation and the internet opening up the floodgates to a whole new generation of artists, but it’s clear that he looked back on the classics and fell for their artistry too. But most importantly, his enthusiasm for it is contagious – it’s hard not to grin at Asakusa and Mizusaki getting all excited about old tools.

Again, that’s not an isolated incident. The ending itself is a neat showcase of how much thought and love Oowara has put into animation. Although it’s not the flashiest sequence penned by a mangaka in recent times – can anyone even come close to Tsukumizu’s closure for Girls’ Last Tour? – the deliberately rough craft in Eizouken’s ED captures the feeling of amateur art by self-taught creators like him, meaning that polishing it too much would have actually defeated the point. Oowara has picked up plenty of technical knowledge over the years of course, as becomes obvious in the conversation between the girls about how to tweak a rough spinning windmill cut to make it a more convincing piece of animation; the consideration to the angle of the blades is the kind of detail that an illustrator who doesn’t have to concern themselves with motion all that much might pay no attention to, but of course, someone enamored with animation like Oowara would be fixated on that.

The part I was looking forward to the most, though, is the scene that immediately follows that. One that proves that Oowara hasn’t just given thought to what makes technically competent animation, but also what the trickery is behind evocative shots. This resonated very strongly with me because Asakusa’s explanation about animators scattering things in the wind to underline its presence happens to be, almost word for word, something I’ve heard first hand from Kiyotaka Oshiyama – an artist so knowledgeable he felt like a director while he was still a young animator, and who’s proved to still have the heart of an animator now that he directs. When drawing a certain free-falling scene in Rebuild of Evangelion, Oshiyama felt the need to ad-lib details like that to convey the speed, resistance, and the force of the wind too. Nothing about their reasoning is revolutionary – this is the kind of challenge that animators face in a regular basis – but seeing both of them explain the solution they arrived at in the exact same terms really convinced me that Oowara knows what he’s talking about.

And of course, with Asakusa being the world-building nerd that she is, she would go a step further and blast a hole through the building in front of the windmill, because how else would the wind reach it to begin with? Eizouken is a series that understands the necessary balance between technical proficiency and letting your imagination run wild when creating animation; stop the latter and you have barely more than a tech demo, but forget the former and the result will fall apart. Even its cast embodies that somewhat: Asakusa is a dreamer, Mizusaki more of a realist, while Kanamori… well, she’s a producer. Someone’s gotta root them to the actual reality of getting anime made.

Though this time I’ve focused more on giving credit to the original creator, that doesn’t mean that Science Saru’s team stopped putting their love for animation to good use. In and outside the screen, everyone involved with the show seems to be having a great time nerding out in the best possible ways; and I do mean that, since they’re even editing official sakuga reels to confirm the authorship of certain highlight scenes, which has allowed us to confirm suspicions I already talked about in the previous post and also clear up doubts. Having already made the point about how the world triggers Asakusa’s imagination – and without Motohashi’s obsession for a densely packed screen, but rather other storyboarding quirks – the biggest visual standout was the noticeably looser animation whenever Asakusa’s imagination is running wild, before she even hits 100% fantasy mode. And when it does, seeing the likes of Masamichi Ishiyama channeling his LWA energy in full with funny smears and eye multiples feels like a fitting reward.

Another aspect that felt well-realized was Kanamori’s dominating screen presence – enough to sell that a kid like her could easily overpower adult teachers as she does. Saotome Kei, the animation director for a chunk of the second half of episode #02, mentioned that an acquaintance of hers came across rough drawings featuring Kanamori while she was working at the studio and immediately assumed it was a horror series. If that doesn’t prove that she’s one hell of a child, I don’t know what does! And while I wouldn’t say it was specific to this episode, seeing more of the setting’s wild architecture is always a reward in its own right, even when its point has already been made; incidentally, a couple of industry folks have pointed out that the pool faculty office is very reminiscent of 4ºC’s real CG department, though I think that’s simply a happy accident since it was already present in the manga. Either that, or Oowara’s love for animation is such that he’s been sneaking into studios.

One thing that you might have noticed is that this episode is a departure from that idea of fresh directorial talent to directly mirror the young creators in the show itself. Storyboarder Takashi Kawabata has been in this industry for about 15 years already, having been in directorial positions for the vast majority of that time; often standing out in SHAFT titles, though considering his presence in Jojo Part 5 and Fire Force, I feel like his contact at the studio might have been one of the many managers who moved to David Production recently. And while she hasn’t been around for that long, episode director Atsuko Tonomizu has also spent quite a few years in this position already. Not like there’s anything wrong with that, of course, but I’m bringing it up to get you preemptively excited about the fascinating debuts that we’ve got coming up in the next couple weeks. Look forward to that!

Not present in, among many many things, either Eizouken episode so far: Nobutake Ito. Seriously, where has he disappeared?! The latest credits of him I can find are still from 2018 Also, I think that this series is kind of solidifying one of the shifts I’ve felt about modern Yuasa in comparison to his older output. I feel he’s significantly toned down his approach to comedy. Not to say that Eizouken’s gags are not funny (they are), or half-baked (they’re not), but I feel that the approach is not going all the way into them. Not quite the same from… Read more »

Nobutake Ito did a bunch of animation work for Ride Your Wave. I understand why he wasn’t given the character design role for once since Kojima embodies the trendy style Yuasa went for a lot better, but even then he still was very important to him. Him being missing on Eizouken (a show that *would* have worked great with Ito designs) tells me that he’s got to be busy with something else – probably Gundam related, considering where he’s been lately and his career as a whole. Important role on Hathaway’s Flash, I assume! (Also, noted! I’ll try to wrap… Read more »

Myeah, I’m an idiot and forgot to check the credits of KimiNami because I am a dumbass. Thanks, it’s good to know he’s alive, well and involved in stuff. I don’t mind Yuasa going with different designers, I guess none of them has built the same equity with me as a viewer as Ito, but Kojima is very very good and I was instantly in love with Asano’s work on Bokura mada underground

Great insights! Thanks for your work! Will these production notes continue for each episode or will you be diving into other series as well?

Eizouken coverage will continue for sure, maybe not on a weekly basis but as soon as there are new interesting things to say about it. As far as ongoing TV shows, I know for a fact I’m going to end up writing about Haikyuu – though I’m still undecided about the angle to take there. Otherwise, I’m open to suggestions and shows convincing me that they’re offering something special that’s worth digging into. Anything from Dorohedoro to Show by Rock is fair game!

Awesome, thanks for the reply! Personally I’m really enjoying Madoka so far and I’d love to know some more behind it’s production in the future.

Thanks for the article! I really appreciate that you gave credits to the author of the original manga and pointed out their deep knowledge and authentic depiction of certain aspects of an animator’s work. It’s a great feeling not only enjoy the overall artistic greatness of the show but also constantly get these little insights and details of how anime is done.