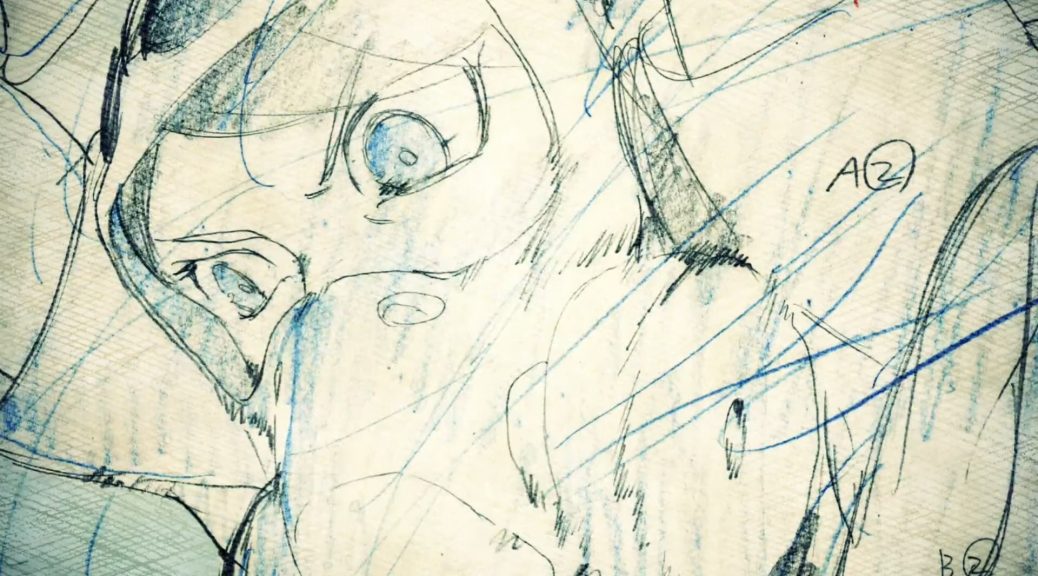 Keep Your Hands Off Eizouken! continues to follow a young group of creators making animation not as a tool but as a goal of its own – and its latest episode is the product of the effort of a brilliant, real up-and-coming artist relying on friends with that same mindset.

The idea that Eizouken is mirroring the young team of creators that star in the show with an equally fresh production crew behind them isn’t new, and frankly, it’s very compatible with Science Saru’s normal modus operandi. After all, they’re a rather new studio that gathers youngsters on the regular, so they’re not exactly swerving off their course to make this happen. There’s a special kind of untainted enthusiasm that, no matter how much you love your work, only newcomers are able to provide – we see that in the series itself, and it was almost a given that we’d see it behind the scenes too.

That said, the effort they’ve made to give youngsters a platform (especially on a directorial level where opportunities are harder to come by) is such that we can’t gloss over it if we hope to understand what makes Eizouken so charming. Within the first four episodes, we’re seeing the fully-fledged debut of a couple of young prospects at Science Saru; each approaching the director’s seat from a different angle, something that Eunyoung Choi has confirmed to be a deliberate choice. Both of them are even assisting Yuasa on overall series direction duties, which makes the studio’s investment on their new generations feel even more genuine.

And it’s not just Science Saru’s home-grown talent that they’re carefully rearing: this third episode also happens to be a directorial debut for a very promising freelance artist! And what a complete debut, since it’s the first time Yuuki Igarashi has acted as episode director, storyboarder, and animation director.

Igarashi went unnoticed by anyone but the most devoted animation fans who monitor promising youngsters with social media presence… and then, Mob Psycho 100 changed everything. He went from being that one Tumblr artist that diehard fans might remember for his palpable early Akira Toriyama and Gainax influences to being catapulted into sakuga stardom via his extensive contributions to the series – making him into one of the greatest discoveries of a project that specialized precisely on that. An artist who materialized out of nowhere as far as most viewers were concerned left behind some of the most memorable sequences in the series, with quite the repertoire at that. His works shared frantic rhythm and tendency towards snappier movement, but also an elasticity that made that abrupt motion flow nonetheless, a great grasp of space, and even a mindfulness of core ideas of the show; like for instance, making violence involving kids come across as nasty despite cool action being a selling point of the series. One major project was all it took for Igarashi to begin standing out as a new animation prospect and budding storyteller.

Ever since then, Igarashi’s been involved in various interesting projects – his surprise dancing ending animation for Hisone & Masotan will never be forgotten – but the title that sums up his most defining trait is one that isn’t looked back on as fondly. Welcome to the Ballroom found itself in an awkward position since the start: a very demanding premise in the hands of a team used to uncompromising approaches… except this time they were clearly subjected to limitations, and yet asked to make something as fancy as usual; pointing fingers is rude, but if you compare TOHO-funded titles by that crew ala Haikyuu!! with Pony Canyon’s Ballroom, you might be able to deduce the culprit.

Either way, Ballroom’s team had the nearly impossible mission of depicting dancing in a breathtaking way while keeping the brakes on in the animation front. Industry titans like Takashi Mukouda alleviated the pain without a doubt, but it was Igarashi who seemed to adapt the best to that uncomfortable scenario – even his still shots left a stronger memory than most pieces of animation! And that can be distilled to a simple reason: Yuuki Igarashi is an economical craft genius. He’ll spend the exact amount of energy a shot requires according to its context and the state of the project, make it appear as if he made no sacrifices at all, and then move on to the next one. For all these positive traits about his animation that I’ve already highlighted, the one that stands out the most when you take a broader look at his career and examine him not just at his best but also when he’s faced trickier prospects, is that he has cost-effectiveness well beyond his age. And as it turns out, efficiency is really important in the TV anime space.

Even a comparatively blessed project like Eizouken can make good use of Igarashi’s smart pacing. Chances are that you didn’t even notice that his episode clocked at 220 cuts, about a hundred under TV anime’s average and easily halving the standards of noteworthy animation showcases that we’re used to. If you revisit the episode with that in mind, you’ll likely notice that it does away with many establishing shots by merging them with the ones initiating the action, and that his smart threading allows him to make those shots last longer to boot. Eizouken #03’s constant back and forth between reality and fantasy makes it a tricky beast, but Igarashi managed to twist that into an asset of his own by boarding neat match cuts and even sequences that carry the animation momentum between dimensions. Between the resource management so expertly done that you don’t even notice he’s cutting corners and the deliberateness of his every move – more on this later – it’s honestly hard to believe this was his first job in directorial positions. And yet at the same time, it’s hardly a surprise that it turned out so well, since those were qualities he already exhibited as an animator.

For all this emphasis on efficiency, you shouldn’t let your takeaway be that Igarashi is being inventive in an attempt to lessen his workload. If anything, it’s the exact opposite: his smart approach let him to handle a ton of tasks, hence why he spent most of 2019 working on it. Igarashi personally drew 120 of those cuts, allowing him to bring out the exact nuance he wanted out of the smallest minutiae (like using a casual shot of Mizusaki pouring water as an in-joke that also bridges her different demeanors) and then supervised the rest of the animation to boot. Igarashi even served as the prop and mechanical designer, which considering how many utensils show up in this episode, is no small feat either; back in May, he expressed his surprise that people are able to draw their storyboards without having all those design sheets, something that makes quite a lot of sense in retrospect.

Perhaps the best testimony of Igarashi’s success after all that work is how strongly this episode resonated with industry folks. Mind you, Eizouken’s subject matter has always made it relatable for creators, but the effusive praise this episode kept receiving from people in this industry is still worthy of note. Igarashi managed to express a feeling that resonates very strongly with them all: that they want to create animation, not as a necessary vehicle to make anime, but as a goal in and of itself. Anime’s embarrassing working conditions make it a job that you can hardly ever justify if you don’t factor in your personal artistic fulfillment, and yet this industry denies its members that fairly often too. As uplifting as this episode was, it knew how to leave a bit of a bitter aftertaste too.

And as important as that message – already present in Oowara’s manga – is how Igarashi decided to articulate it in animation. For all of Mizusaki’s talk about the value of animation that focuses on careful body language and realism over flashy sequences, you might have noticed that the sequence she ends up animating is… flashy work with no realism whatsoever, actually. But once again, this is deliberate; rather than making it a showcase of the style Mizusaki was passionately defending, the animation in the climax is attuned to her fervor, because Igarashi’s storyboard considered not just narrative but also emotional storytelling. That gave room to even the people in the team who admitted they disagreed with the vision Mizusaki exposed to have sequences where they felt at home, while others managed to bump the quality of the realistic mannerisms during the downtime.

The last point worth going over is that for all this praise directed at Igarashi, regardless of the outrageous amount of work he did by himself, he couldn’t have done this alone. It goes without saying that he’s very thankful to the show’s core team, starting with Yuasa himself and ending with everyone’s beloved animation ace Norio Matsumoto – who showcased not just his character animation finesse but his ability to adlib eye-catching mob designs.

Leaving those regular contributors aside, though, Igarashi has stressed out how much he’s been helped by his own friends. That’s something you could have deduced by looking at the episode’s credits, but as he admitted, it goes beyond that as well – like the directorial advice that Makoto Nakazono would give him even if he called with questions in the dead of the night, or the ads in the train designed by artists like mebachi and heko. The same applies to the animation: the boldest climactic shots come by the hand of his animation circle partner Kai Ikarashi, whom he already had in mind when storyboarding. And considering certain comments, I have the feeling that his other circle partner Naoto Uchida – and perhaps a certain nara paying back favors? – are behind the uncredited animation sequences in the episode too. [EDIT: Congrats to the official account for blowing the cover of a certain Go & Seki before realizing they screwed up and deleting it.] They say that a director’s worth lies not only in their own skill but their ability to gather acquaintances who can grasp what they’ve envisioned, and on the very first chance to help out Igarashi, all his pals showed up to do exactly that.

It took Asakusa finding a small group of friends to be able to make her animation dreams into a reality. Now that Igarashi’s got that as well, he might be unstoppable.

Caught up with this anime and bravo. This is what it’s all about. Also it seems like it was made for this site lol

No kidding! It’s so tailor-made I’m not entirely sure we deserve it, but you know, not gonna complain.

Reading about Igarashi’s career history I couldn’t help but think constantly about themes and characters of Eizouken. Knowing about all these peculiarities and interesting coincidences of production of this show is a real revelation that helps to experience this anime with a quite different perspective. The part about Igarashi’s friends helping with production got me curious. I apologize in advance, I’m not sure I understand this correctly, is it normal practice to involve people outside of the studio in production? I remember reading about this but I think I might have some misconceptions. Sorry again, hope this question is not… Read more »

It’s a very common practice, though the degree to which it makes a difference varies depending on the circumstances of the production. This episode is an example of personal relationships being decisive and that’s worthy of note, but the anime industry as a whole relies on acquaintances and paying back favors on the regular.