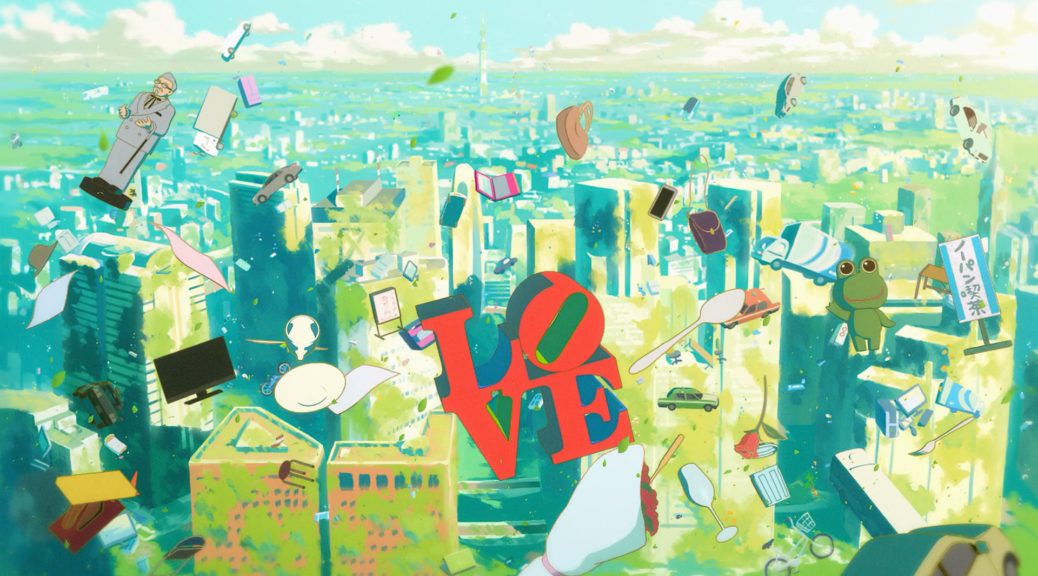 I dared to keep Tachikawa away from this column for one week, and now he’s pissed off and back to reclaim his rightful throne. You know which series I have to start with this time.

This week’s episode of Mob Psycho felt the most conventional in its craft so far, which is perhaps a shocking thing to say considering it relied the most on modern tools and techniques. Whereas early episodes displayed and focused on approaches you simply don’t see in TV anime – Gosei Oda’s vivid linework and Showa era style drawings, Miyo Sato’s paint on glass sequences – Kenichi Fujisawa pulled off a way more standard webgenWebgen (web系): Popular term to refer to the mostly young digital animators that have been joining the professional anime industry as of late; their most notable artists started off gaining attention through gifs and fanmade animations online, hence web generation. It encompasses various waves of artists at this point so it's hardly one generation anymore, but the term has stuck. outing. A damn good one at that, though! Just one glance at the stylized and flat FX and debris tells you that we’re in for a digital party, and then you see silhouettes very much in Yama’s style plus plenty of other classic – can they already be? – webgen idiosyncrasies. Even when it comes to the construction of the episode and the way the action is framed it’s easy to notice digital mannerisms, which is understandable considering Fujisawa himself storyboarded it. His more personal tells are in full display as well; the Norio Matsumoto influences – and a bit more than that, as it turns out – are palpable, from the mouths to the hands. The action feels like it belongs in Naruto, and trust me when I say that I mean it in the best of ways. Fujisawa’s more recent work seems to have shaped this episode too, since it often reminded me of Osomatsu-san. His take on Mob Psycho’s designs was rounder, and in some long shots even the body proportions are more similar to the Matsuno brothers. His directional debut in that series had similarly deranged character art, but while in that case it was exaggeration played for comedic effect, this episode had more nuance to it; things gets ugly and visceral, because bare feelings and opposite worldviews clashing isn’t meant to be a beautiful spectacle. Within a ridiculous project like Mob Psycho that won’t become one of the directional highlights, but it was very strong nonetheless.

There are some individual victories in the episode – Mob’s blue tinted flashback made the traumatic bloody aftermath of his powers letting loose particularly striking – but I think it represents an overall success instead. The show’s foundations are undoubtedly rooted in traditional production, with no reliance on 3DCG and both animation and art departments heavily leaning towards classic craft. But Mob Psycho is a strong enough framework that it can easily contain a very modern episode, which seemingly should clash against everything it had done before. It’s not as if this was the first time digital animation was used in the series, but the way a whole episode focused on it managed to work just fine is impressive. Drastic changes to the approach to production for isolated episodes are always met with resistance, yet this time I personally saw no complaints whatsoever – the change barely even seemed to register! The show’s lexicon increases every episode, and fans who have made it this far seem to have understood that the one rule when it comes to Mob Psycho’s visuals is that there really aren’t rules. It’s fascinating to compare Kameda’s version of some events on the teaser PV versus what we ended up getting, especially since the former embodies many aspects of traditional craft. The fact that they’re so different yet both feel like they belong in Mob Psycho might be Tachikawa and Kameda’s greatest achievement.

We’ve started by talking about digital animation, so I’d like to take this as a chance to very briefly recommend something I namedropped at the end of last week’s post: Hiroyasu Ishida’s FASTENING DAYS (2). Studio Colorido is one of the most interesting up-and-coming companies in this industry, a fully digital studio that attracts young talent and skilled animators. Leaving some exceptions aside – particularly the short films directed by Takashi Nakamura – they have already managed to build a strong studio aesthetic, the kind of visual brand that many companies that have been around for decades never managed to earn. While they’re still a very small group, as you can see on their recently renewed website, the scale of their projects keeps on increasing. Last year they produced their longest (short) film in the form of Noruda, and even their outsourcingOutsourcing: The process of subcontracting part of the work to other studios. Partial outsourcing is very common for tasks like key animation, coloring, backgrounds and the likes, but most TV anime also has instances of full outsourcing (グロス) where an episode is entirely handled by a different studio. duties have leveled up; rather than doing little bits of key animationKey Animation (原画, genga): These artists draw the pivotal moments within the animation, basically defining the motion without actually completing the cut. The anime industry is known for allowing these individual artists lots of room to express their own style. like they used to, very recently they got to entirely handle the animation production of an episode of Battery. A whole series still feels out of their league, but perhaps we’re approaching the point where we can have a short TV anime or a full length film by Colorido. Keep an eye on them, and keep an eye on this site because I’m sure I’ll go revisit their work to extensively talk about it here. And to wrap things up I’d like to jump back into currently airing anime, to address a show some readers and even part of the staff here kept nagging me about. I was holding on when it came to New Game! while waiting for a particularly flashy episode as an excuse to bring it up, but those turned out to be misguided expectations. One notable – if a bit questionable, *cough* – piece of animation from the series went viral this week, and I feel like it represents what the show focuses on. Rather than the cartoony style embodied by animators like Yuuki Watanabe that Dogakobo as a whole have become known for, New Game! shines most on quiet scenes with rich body language. It’s not as if this restrained approach is entirely new to them, and New Game! itself still has some loose and fun work, but the priorities certainly are different compared to most of their best series.
The production undoubtedly suffered from poor timing, as the studio’s strongest assets went surprisingly hard on last season’s Sansha Sanyou; the usual suspects – the likes of Chiaki Nakajima, Hirofumi Okita, Nobuyuki Mitani, Toshiyuki Sato, Ryosuke Nishii or Masayuki Nonaka – are either entirely missing or have contributed very little to the show. The lengthy lists of animation directors suggest that they’re struggling simply to keep things on-model, but they’re making the best with what they have available. And I have to say, as much as I personally enjoy Dogakobo’s cartoony moments, the more subdued style that is prevalent in New Game! does an excellent job at humanizing the characters. Even if the series isn’t the most realistic depiction of video game production, it has managed to create a very believable workplace inhabited – yes, literally – by simple yet compelling people. And that’s partly thanks to the way they’re animated, with apparent mannerisms and subtle character acting. There’s no denying that I’ve been forced to readjust my expectations for this series. It hasn’t been in a necessarily bad way however, so I’ll keep on enjoying these little moments that quietly make the show a pleasure to watch.

This is it for this week. Not entirely sure what I’ll tackle next week, for once I feel like I’ll just let anime surprise me and choose whatever was most interesting. We do have some plans to start fulfilling the Patreon requests though, so look forward to that!

Next week we’ll have the long-awaited Kalos League final second part, if Satoshi vs Shouta and the first part of this vs Alan are any indications, I am so wishing for Iwane and team to go all out.

As for New Game, I too have liked most of the details they applied to the whole enviroment that the manga can’t always convey, main reason why it’s still really enjoyable.

I’ll keep on hoping Fujii finally joins the Pokemon party! I need to be personally pandered to more.

And yeah, the attention to detail when it comes to the workplace and the understated character moments are what elevates New Game. They’re breathing life into the series without really changing anything.

If Ohashi hasn’t managed to get a hand into this episode, Fujii or Nishiya would be great for all the trainer posing. Iwane is not bad, he’s got a nice timing and learned from making Satoshi and Greninja synchronize their moves, but it’s nowhere near on Ohashi or Fujii’s dynamism and while decent they (Iwane’s) are a bit lackluster.

Not high hopes of Fujii though, my money would be on Nishiya or almost solo Iwane.