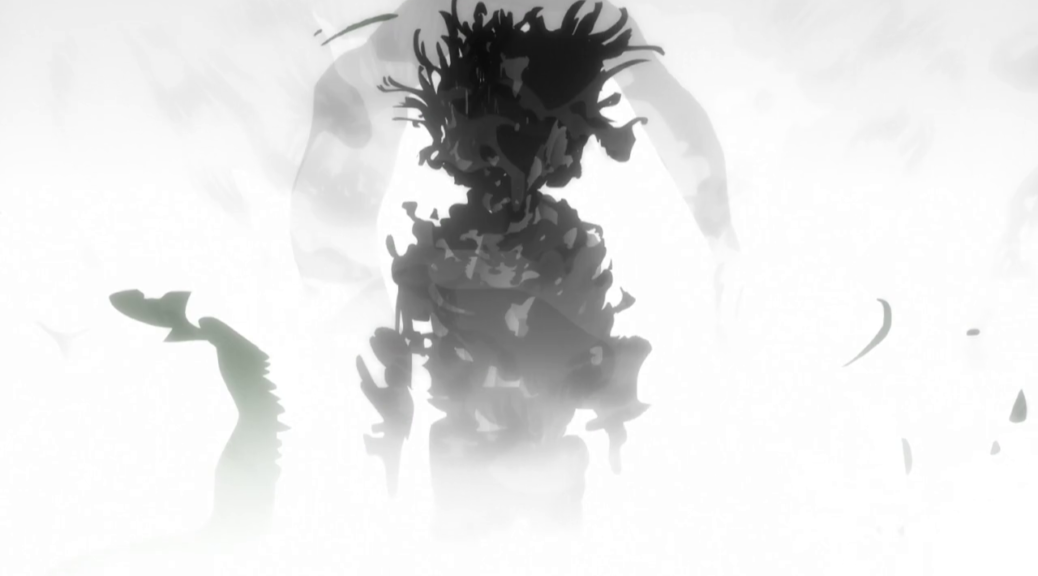 Mob Psycho has switched between multiple animation styles, so it’s only logical that it would do so again for the main action episode so far. It’s webgen‘s turn to shine!

Let’s start with a brief introduction to what Web Generation – henceforth webgen – is. This animation movement is shaped and followed by a group of mostly young artists, which is why Generation is integral to its name – the fact that it’s carried by new talent grown on different sensibilities and tech is what defines it. To put it simply, they use digital tools to create their animation rather than doing so traditionally on paper, and their idiosyncrasies have that as an origin. They draw on tablets and using software like Flash, that alone makes their default work feel different. The Web in the name refers to many of them having started off doing short animations for their blogs before getting hired to do professional work. This generation’s pioneer is considered to be Ryo-timo, director of Yozakura Quartet: Hana no Uta, which was not coincidentally also the first TV anime to have fully digital episodes. Another important name is Shingo Yamashita, a webgen animator who has taught many young digital animation students and brought them into the industry. Nowadays, webgen is used as a synonym to digital animation, even though many newcomers didn’t lauch their careers from their personal sites. The name now simply represents the legacy of how digital animation entered the anime industry.

The drawing style of this episode is the complete opposite of the previous one. Moroyuki focused more on detailed drawings and less on the actual animation because of the obvious limitations of solo episodes. Episode 5’s drawings on the other hand are mostly very simple, similarly to episode 3, and focus on motion. That’s also a webgen characteristic.

The main name behind this episode is Kenichi Fujisawa. He entered the industry in 2007 as a key animator without any in-betweening credit beforehand, as is often the case with webgen animators; they’re scouted as artists who have already produced work that caught people’s attention, so they presumably don’t need that learning phase – which might also be the reason some of their weaker peers are criticized for having poor drawing fundamentals. To be honest though, I’m not sure if Fujisawa himself started off drawing digitally, and if I were to guess I would say that he has some traditional roots. Either way, thanks to Murad‘s coverage of One Piece animators, his name gained traction even within the western fandom as he often worked on Studio Guts’ episodes. Also following a common pattern, Fujisawa eventually stopped working exclusively for Studio Guts and became a freelance animator. He then started hanging out around talented people and visually ambitious projects such as FMA:Milos, Space Dandy, and the previously mentioned Yozakura. He also had the opportunity to work on Naruto, which had a big impact on him as an artist since Norio Matsumoto became one of his biggest influences. The similarity in styles is such that through the episode preview, people already predicted that it would be Matsumoto or someone related to him. Earlier this year, Fujisawa made his debut as an episode director on studio Pierrot’s Osomatsu-san for a segment of episode 18. He gathered many of his animator friends – including Matsumoto himself – and crafted an episode that truly stood out. Just like he did this time!

Among the animators credited are Shin Ogasawara, who animated this wonderful rotating shot in episode 1; Kanchi Suzuki, Fujisawa’s buddy from Osomatsu-san; Kenji Hachizaki, Telecom’s veteran animator, and Kenichiro Watanabe who presumably animated the part displayed in the header. The name I’d like to focus on this time is Hiromitsu Seki. His work on Twin Star Exorcists’ second opening sequence – directed by the previously mentioned Shingo Yamashita, see how it all connects! – stood out in its complexity. The way he incorporated background animation without relying on 3DCG truly fascinated me. I suspect he is the one who animated the fantastic sequence shown below, since it also displays his fantastic understanding of spatial motion and perspective during complex sequences. Amusingly, he began his career as an inbetweener at Bones, so this marks his wonderful comeback to the studio.

Even though Fujisawa had done episode direction before, this was his full debut as a storyboard artist and sole animation director. It seems like Tachikawa gave him as much freedom as he wanted, since he extended the fight and added in some parts that weren’t in the manga – even improving some existing visual gags. Talented animators in charge of storyboards often tend to make liberal framing changes to the material, and that’s a sort of thing I really appreciate. I said before that Fujisawa has been greatly influenced by Norio Matsumoto, and it really shows in this episode – just look at all the teeth!

It seems to have become a rule for this series that the odd episodes are sakuga festivals, and the even ones are more modest. Let’s see what the next week will offer!

Didn’t really know much about Hiromitsu Seki before he worked on the Onmyouji OP. But if he really did do that cut in Mob Psycho he’s someone to watch out for. It must take incredible technical prowess to achieve such smooth dynamic movement in 2D animation.

“Goddamn, there are some sequences that really look like Norio Matsumoto’s work, even for someone as influenced by him as Fujisawa”
*a few hours pass*
“Oh Hamaguchi confirmed a certain someone worked uncredited on the episode”

How does he know that if he didn’t even work on the episode?

He did 2nd KA on the episode.

He’s a major source of animation credits too, always willing to reveal stuff.

Akira Hamaguchi? Does he have a Twitter? Can’t find it… Where does he leaks all this :<

[…] further information into this topic, I’d suggest for you to check this out: https://sakugablog.yshi.org/2016/08/08/mob-psycho-100-episode-5/ for they’re quite in depth and very knowledgeable. So with this week’s analysis of Mob […]