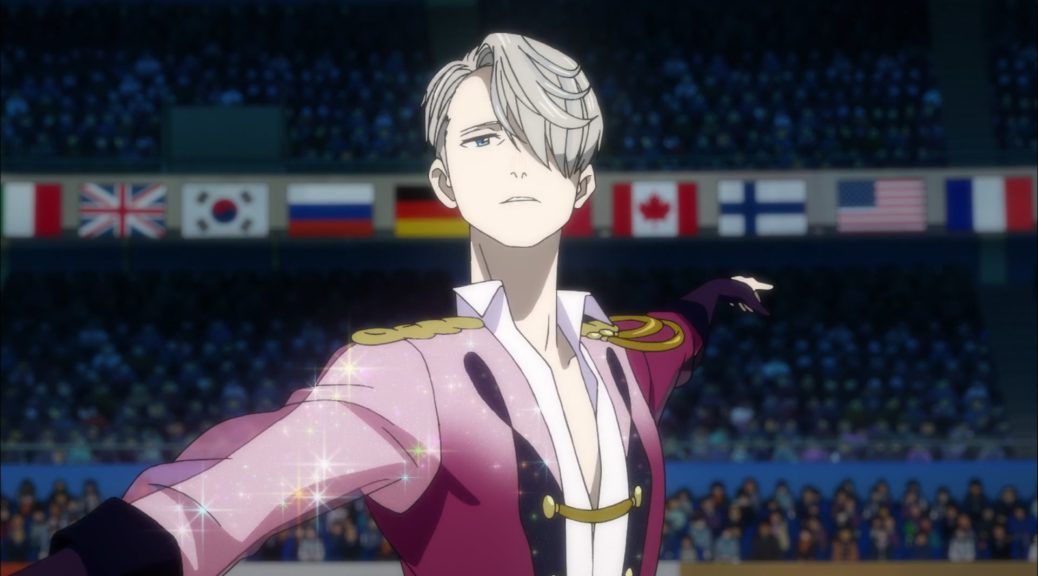 This interview was kindly contributed by Good Haro, a professional translator. You can find the original in Japanese over here.

Men’s figure skating anime, Yuri!!! On Ice has finally started.
Chacott received the initial offer to design the costumes this January. We don’t even know the full story ourselves since it’s something Ms. Mitsurou Kubo wrote as an anime original series. We’re very excited to see where it goes from here♪
But there’s one thing we want you to pay attention to other than the story: the athlete’s recital costumes!
This time we’ll be interviewing Ms. Sagiri who designed the original concepts for the costumes. You won’t want to miss a glimpse at how the original designs were created and how they were adjusted for animation! 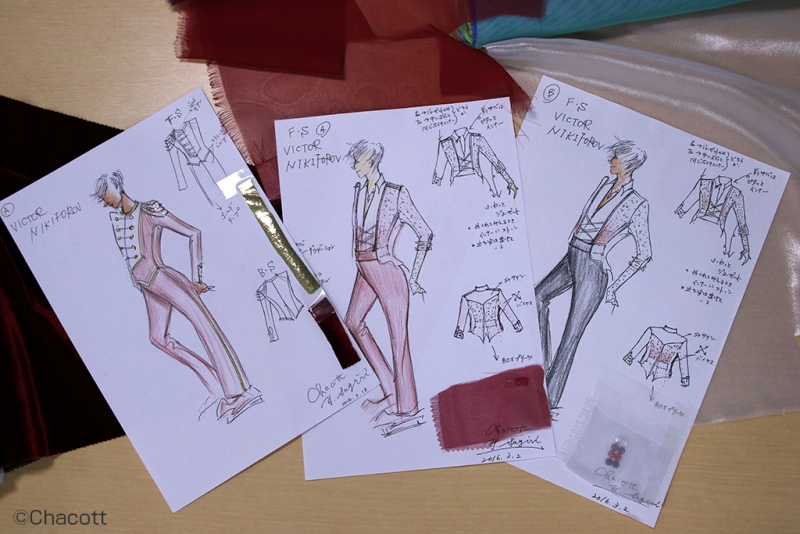 So, I have to ask, honestly, how did you feel when you heard they were making a figure skating anime and wanted you to design the costumes?

My first thoughts were that it sounded interesting and like a lot of fun, but I really wasn’t sure what it’d be like to design costumes for people who aren’t real (!?). Normally when I get costume commissions from an athlete, I speak to the athlete and their coach about what sort of image they’d like to project. From there it’s usually pretty easy to imagine what the performance will be like, but… [with anime] I thought it might be a bit more difficult in that respect.

When you accepted the job, where did you start with the designs?

I started off talking to the director, Ms. Yamamoto––who also happens to be a big figure skating fan herself––about the main characters, the outline of the story, the themes of the performances, what sort of look she was after with the costumes, and whatnot. We even got into who would win and lose each competition.
Most of the music used for the performances would be original for the show. When Mr. Kenji Miyamoto described the choreography to me, I decided to design the costumes just like I always do, so even real figure skaters could perform in them. I felt like going the authentic route allowed me to really give the designs my all and convey the intent behind them better.

The first ones you drew were used for the teaser illustration, weren’t they?

Early on in the design process, I was asked to design costumes for both Yuris and Victor for the teaser illustration. There wasn’t a particular performance in mind or anything in this instance, so I was just asked to design them how I liked with the characters in mind! I drew each of them with two patterns.
The designs have already been revealed on Twitter and I wrote about the ideas behind them too. [Note: See below!] 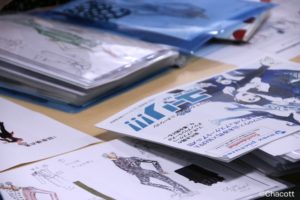 The teaser illustration was blue-toned, but the original designs had a different feel to them, didn’t they?

Victor and Yuri Pliestsky were easy to visualize, but I had a much harder time with Yuri Katsuki. There’s just something difficult to pin down about him.
The teaser illustration was rendered in blue monotone, but as the reigning champion, Victor had this strong, princely image about him. If [I were to compare Victor to] a piece of music, he’d be something classical or Bolero, so I went with a bordeaux on his top and pants to emphasize that strength.

Could you tell us a little about Victor’s free program costume from the first episode?

Sure. One thing I think is a key feature of men’s costume design is the two piece look. With this costume, I went with a sort of tail-coat looking hem in the back, but getting the length of the tails just right was really critical. Longer tails might have made it easier to balance, but they’d get in the way during spins, so I shortened them up a bit. The awkward length makes the design not exactly the most wearable for all heights, but the it’s a perfect fit for someone of Victor’s stature. Also, I’m not sure a real costume would be able to feature this (it  would cost an arm and a leg…), but the body suit under the georgette overblouse is meant to be encrusted in Swarovski crystals. I wanted to express his strength and princely bearing in the way the crystals sparkle beneath the translucent georgette fabric.

That’s it for what’s been shown so far in the first episode, but there are plenty more costumes where that came from! We’ll be publishing more interviews with the designer later about other costumes as they appear. You won’t want to miss it♪

Tweets about the teaser illustration costumes:

A fairytale prince born with both beauty and incredible talent and a personality so sparkling he doesn’t need extra embellishments… I designed this one for maximum impact with minimum adornments. 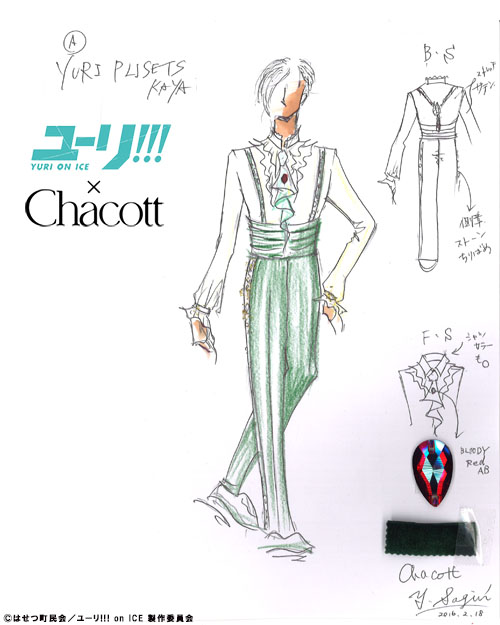 A super frilly dress shirt with an almost blindingly glittery tie pin and emerald green velour pants… I tried to evoke the archetypal ’bishonen’ aesthetic from [classic] shoujo manga with this one. [TL note: she totally means stuff like KazeKi] 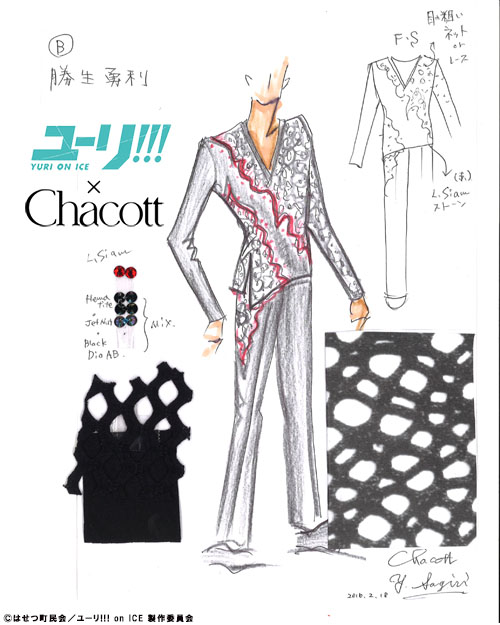 Sexy with fishnet and stretch lace. I designed it so that the red lines would flow into the pants, connecting them to the top in a continuous line. I wanted to capture the [contradictory] desires for allure and modesty… like a flickering flame, burning with intense passion. 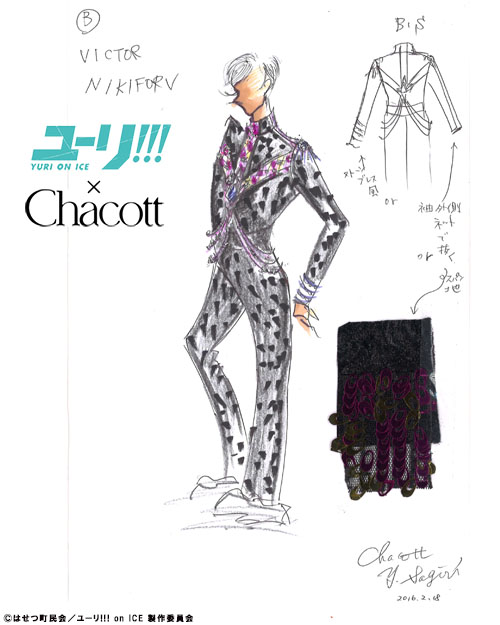 I wanted this one to make a strong impact––a costume you’d immediately associate with the character. Even with the rather odd combination of crushed velvet, and purple and gold sequined fabric, and the unusual cut, it all comes together to create a refined, noble look.

Just discovered this series of translated interviews! Thanks so much for translating them here! This is all so cool and very interesting. I love that they hired an irl figure skating costume designer to make the outfits for the show. Even not being an ardent irl figure skating fan myself, the costumes still always felt very authentic and I guess this is why!