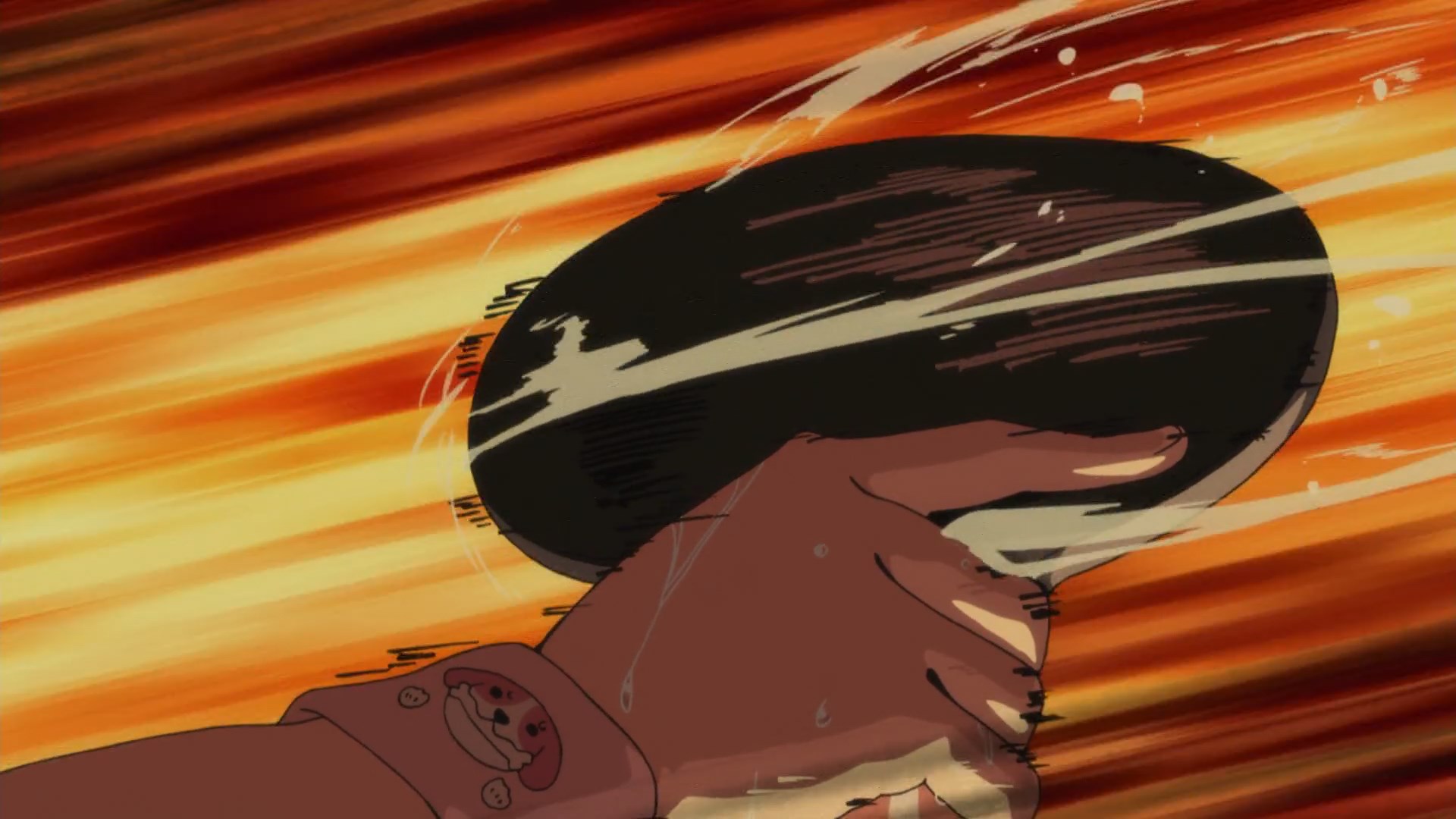 This anime season is unusually full of prestige titles, offering notable projects to pretty much any audience. Sayo Yamamoto’s Yuri on Ice is taking the world by storm, while Kiyotaka Oshiyama’s creative explosion in the form of Flip Flappers has a much more limited appeal but has incited similar levels of passion amongst its fans. Euphonium’s return has been accompanied by the excellent production and refined directional sense we’ve come to expect, and shows like Fune wo Amu, which can’t aspire to shine quite as regularly, still get to boast of incredibly expressive episodes. Even when it comes to less critically acclaimed series, the talent on display is staggering – we’ve already talked about the impressive reunion of well-known and up and coming directors in Occultic;Nine after all. You can add to that Haikyuu, as well as the shorts carried by strong animators like MahoIi and Kiitaro… If you’re attracted to particularly well-crafted anime, this fall season has right about anything, with a big range of genres and distinct production aspects to excel at. Which is all fine and good, but also can obscure less ambitious yet valiant efforts.

Chances are you weren’t even aware that the director of Full Metal Alchemist: Brotherhood was in charge of a series this season, where he’s been doing a remarkable amount of hands-on work to boot. And introducing him with that title isn’t misleading either; Yasuhiro Irie is gifted when it comes to action, so even his way lesser celebrated Code:Breaker series was chockful of interesting cuts – effects animation in particular. His dynamism as an animator is beyond doubt as well, perhaps best exemplified with the rather unbelievable Soul Eater opening he key animated by himself. From fighting to endlessly sprawling shots of background animation, his work there is mesmerizing. His understanding of what makes a sequence exciting has allowed him to develop into a director who can tackle more or less anything, though it’s clear that intense action is where his talents truly click.

As you can imagine from someone who debuted with Kurau Phantom Memory and went on to become famous thanks to FMA, Irie’s name was strongly linked to studio BONES. During one of the studio’s multiple small-scale talent splits he ended up at Kinema Citrus, which has been his home for a few years at this point. He’s been accompanied by similarly talented people who were part of the same exodus, like Kaori (かおり, real name Kaori Fujita/藤田香織), who received her first chance to direct a series with Yuyushiki and turned it into a genre highlight you wouldn’t expect from a rookie. But it wasn’t only BONES refugees who made the studio stand out, Kinema Citrus also became synonymous with skilled young artists; the likes of Ripa and Mai Toda, and Majiro as a central figure who didn’t only do an excellent job on shows like Barakamon but also acted like a bridge between the studio and some other groups of impressive digital artists. It was all beautiful while it lasted, but that sentence is in past tense for a reason. The still recent creation of Studio 3hz caused many of these people to embark on a new adventure instead, while Majiro’s career kept on advancing and distanced her from Kinema. The studio’s animation muscle is gone, seemingly only capable of resurrecting on small projects with old BONES companions like Under the Dog.

This severely weakened studio has kept on working nonetheless, surviving through mostly unremarkable projects until this season. Things seemed to look up when they gave their two most notable directors a new series; not only was Irie going to direct Scorching Ping Pong Girls, he’d even have Kaori as his assistant. Could they do much without the assets they used to have? 10 episodes into the series I can say… yeah, they have! Things didn’t start off well, admittedly. For a while it was only the impressive opening that made fans hopeful for something more than serviceable, since the first couple of episodes didn’t lean on the show’s strengths and instead focused on the very poor humor. The more the actual ping pong stood in the spotlight the stronger the show seemed to become, in no small part thanks to Irie himself; that knack to present scenes in an exciting manner is carrying the series, where he already has storyboarded 7 episodes himself – more than he did in the entirety of FMA Brotherhood, a 64 episodes long series. With time it has even managed to sell some of the relationships as endearing, and given the rivals a beautiful – albeit absolutely ridiculous, as everything in this series is – arc that freed them from their cage.

But let’s go back to the portrayal of the sport itself, which is very interesting from a production standpoint. The depiction of activities with constant motion in TV anime has always been an issue that tends to require some sort of compromise. This season we have two sports series that approached this challenge with almost opposite mindsets – quite appropriately, since they happen to be ice and fire. Yuri on Ice has sacrificed polish and sometimes fluidity to feature an impressive display of non-stop movement. At its best it’s stunning and enchanting, but when the uncorrected drawings are at their worst they turn scenes that are meant to be perceived as a beautiful spectacle into an awkward mess. Scorching Ping Pong Girls instead takes the route that we’ve come to expect from TV animation; very limited motion, an economic approach that often relies on still shots and scarce explosions of sakugaSakuga (作画): Technically drawing pictures but more specifically animation. Western fans have long since appropriated the word to refer to instances of particularly good animation, in the same way that a subset of Japanese fans do. Pretty integral to our sites' brand.. They didn’t so much choose this conservative path as got forced into it, considering the lacking animation power I was talking about earlier. The shortcomings of this approach couldn’t be more obvious when trying to depict dynamic matches, but the series more or less gets away with it through particularly inspired sound direction that at least makes sure the hits always have impact. And when the show is truly on, it definitely earns its title. The exaggerated depiction of their prowesness has been an excuse to show off passionate effects animation throughout the show, thanks to the different themes of everyone’s powers. But even when framed as regular ping pong matches we’re treated with delightful work, which can combine motion unbound by physics with a solid understanding of body motion within one scene. Long rallies are rare but the richness of their movement makes them all the more exciting when they do happen. As a fan of animation I obviously find Yuri!!! on Ice‘s daring approach inherently more valuable, but if you asked me I would say that Scorching Ping Pong Girls is actually more successful in its specific goals to portray the sport. Not to imply this is a competition of course, but it’s interesting to see how different mentalities measure against each other. If we were to include all sports series this season perhaps I would go with Haikyuu instead as the most effective one; closer to Yuri!!! on Ice‘s non-stop motion approach but with polish, instead using lots of stock footage as its crutch. Sport anime is a tricky business without a feasible perfect solution!

When we’re rich I’ll hire an editor whose entire job will be telling me that my titles are bad and I can’t use them.

“The studio’s animation muscle is gone…”
“Could they do much without the assets they used to have?”

What are the practical differences between in-house and external animators?

Author
kViN
Reply to  someone

Availability and room to focus on your own projects for one, as well as easier communication (which is pretty important for directors to make their teams understand exactly what they want). In Kinema’s case it’s not just their in-house team that got weaker though, that also lead to worse freelance contacts – as I said majiro acted as the link with digital animators like Nakayama and Enokido, so without her they lose an important source of talent.

As you noted, it isn’t a competition, but I do find it interesting that you’d choose Haikyuu’s approach as the most effective one. Obviously, this is a personal opinion, but I actually find Haikyuu’s use of stock footage ultimately ends up blunting the effect its going for—I’d rather take Scorching Ping Pong Girls’ more restrained approach than be inundated with the same motions over and over again because it maintains the sense of forward momentum in the match. Or, I’m /still/ just bitter about Seijoh’s loss at the end of season 2 and delight in any chance I get to… Read more »

Also, it’s a shame we don’t know who animated the big climactic cut at the end of e10; the effects animation in the bit you used for the header image looks hella familiar.

Maybe I’m just more likely to accept stock footage because I really like kids shows that use it! But I can see where you’re coming from, and to some degree it happens to me as well. The synchronized attack they keep using in this season of Haikyuu keeps making me laugh and destroying the immersion – I find the footage itself kinda silly to begin with, so it’s become an unintended recurring joke as far as I’m concerned. In the end I’d still give Haikyuu the technical edge over all the other sport series this season, though I enjoy Ping… Read more »

Haha, thanks. Someone caught this on the checking pass and forgot to change it, then it got pointed out and edited but wordpress rolled back one revision because it’s wordpress. The show is cursed.