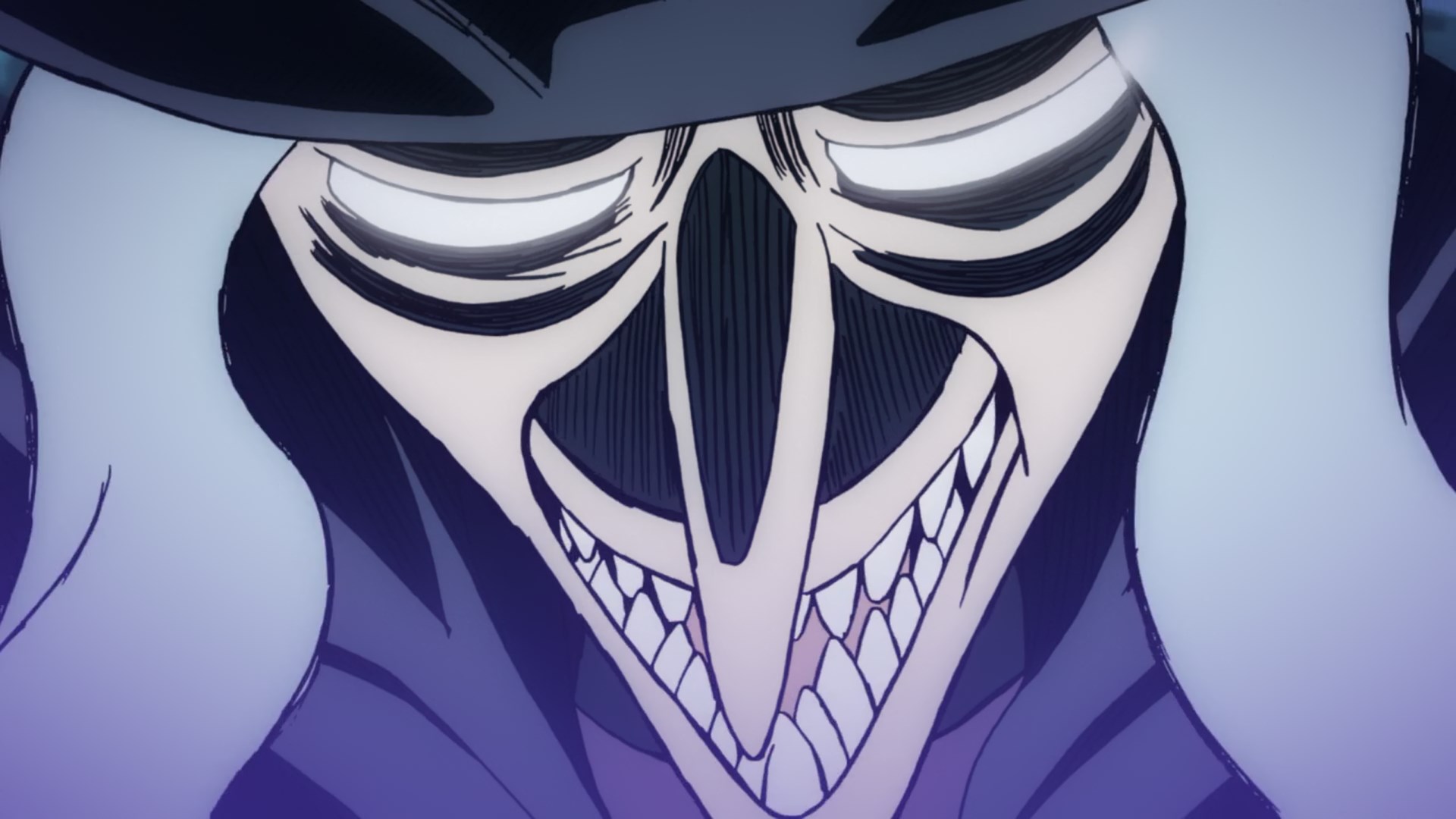 The perfect chance to come to understand what the process of outsourcing anime entails, as well as details about Trigger and the companies they’re linked to.

I’ve mentioned before how much I appreciate Little Witch Academia’s new structure allowing the cast more breathing room, but the same applies to the setting as well. Episodes like this might not serve an immediate narrative purpose, but I’ve never advocated for that as a necessity to begin with. Instead, I appreciate ideas like the decline of witchcraft’s relevance being reinforced, and incidental pieces of worldbuilding like being shown even the toilets in the academy rely on magic.

These write-ups have been heavily focusing on the storyboards, but that wouldn’t make much sense this time around. While Michio Fukuda is one of the most prolific storyboarders in the entire industry, his machine-like output is the very definition of functional. The most interesting production aspect is clearly something else: this was the first outsourced episode of Little Witch Academia. Subcontracting is an almost omnipresent measure in this industry, but it’s important to at least understand what full outsourcing (グロス, gross) entails. When it comes to TV anime, these are instances where the production of an entire episode is subcontracted to another animation production company – Liden Films in this case. Someone affiliated to the main team generally provides the storyboard, but there are instances where even that step is handled by the subcontracted studio; this might be the case here, since Fukuda has strong ties to Liden where he has directed entire series recently. After this point, the studio the episode is outsourced to is in charge of getting it animated, lessening the workload of the original production team. They’re the ones who have to provide enough animators, and if they can’t do that they might outsource segments further – which is why studios like BELOOP and MK Seoul were credited for key animation as well, since Liden couldn’t handle the full load. This process is of course still under the supervision of the show’s core staff, though it’s understandably harder to keep it all under control when things are being created by a different crew somewhere else. This is true even in this case, where the episode was outsourced to Trigger’s quite literal neighbors; as two studios part of the Ultra Super Pictures entity, they assist each other fairly regularly. And judging from their work on LWA TV so far, that’s not a bad option to allow the core team to focus on upcoming episodes. This was the most uneven episode of the show for sure, but the polish was traded for some rather neat highlights. It’s true that only one scene early on carried the fun animation spirit of the series, but the action and effects lived up to the standards of the flashiest Trigger episodes. Sadly, episode 5 also served as a bitter reminder that Yuji Kaneko’s departure hurt LWA’s world deeply. The TV show’s beginnings mostly covered settings we had already visited, quickly showing that his ideas in mediocre hands led to results that weren’t exactly memorable. But now the witches keep on visiting new places, sceneries that simply aren’t as interesting conceptually; after this episode I realized I had immediately forgotten what the dragon’s lair even looked like, which is a shame even if the twist was that it was a bit of a mundane house. There’s no excuse for surroundings that feel like they blend on themselves, and there’s so much more they could have done with the concept of a broker dragon. I still believe execution is the biggest problem the TV series has when it comes to the backgrounds, but it’s a shame to see that even the ideas behind these environments aren’t as strong as I feel they could be. It’s unfortunate that now that the format allows LWA’s setting to come to life much more than it could before, the production can’t appropriately depict it.

This time the list of animators is rather interesting, both when it comes to the roles present and the people credited. For the first time we find an explicit action supervision credit, in the hands of the Trigger-affiliated freelancer Hideki “hidessu” Nakagawa. He started at P.A. Works around 2012, but by 2013 he had already left and managed to develop a link with Trigger after working on Kill la Kill extensively. He’s kept on working right about everywhere, but you can always expect him to show up on Trigger’s work. That’s where all his professional animation direction work is as well, so the studio clearly trusts him. His drawings always appear sharp, a feeling you could get from the debris and effects during the action segments of this episode of LWA. But if we speak of firsts, the most surprising one has to be Rie Ishige’s presence as assistant chief animation director – we didn’t even know the series had a chief animation director to be assisted! This seems to mean either Shuhei Handa or Yoshinari himself are doing uncredited corrections…which we kind of already knew about, to be honest. But seeing how these two unusual supervision credits appeared on the first fully outsourced episode, it’s also possible that those will receive extra layers of corrections to make sure they don’t clash with the in-house ones. Either way, Ishige is a young Trigger animator who hadn’t even done animation direction before so it’s neat to see her receiving a relatively important role. 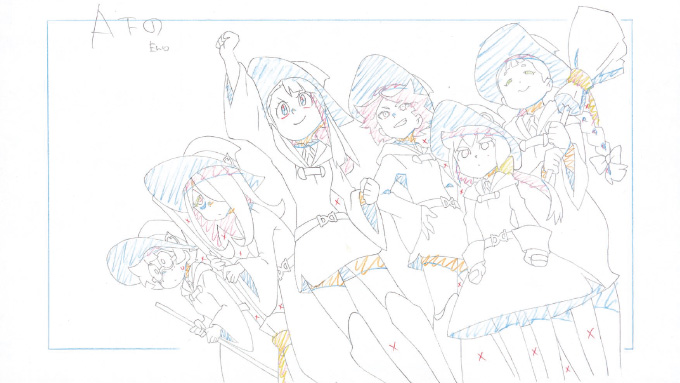 The list of key animators hides its own share of interesting twists as well. People acquainted with idiosyncratic animators’ names will surely notice Tomoyuki Niho’s presence; Niho belongs to the same club of gifted, out of the ordinary geniuses like Hokuto Sakiyama, whose unusual talents strongly stand out but also make it hard for them to find regular work in the anime industry. Niho is mostly known for his work on Birdy Decode 02 and the controversies it caused; his fascinating rough cuts in one episode were heavily modified for the disc release, which feels infinitely more polished but also killed a bit of its weird charm in the process. It’s not as if such wild work is all he could do, but his style is understandably not marketable, so it’s no surprise that Niho actually quit TV anime for years. After his comeback in 2014 he’s been mostly restraining himself, to the point it’s not so easy to spot him anymore. I feel like his work on this episode of LWA was during the fight against the wyverns – around the end of this upload you can see the effects suddenly change from the aqueous Yoshinari-school aesthetic to rougher, more solid forms. While it’s definitely true that the current Niho isn’t allowed to go all out like he did before, particularly with his recent Liden collaborations, it’s still great to have him around.

This episode has quite the long staff list (there’s even two scriptwriters!) and I’d rather not overwhelm everyone with even more names, but it’s my duty to point out that the second group of key animators includes the people from Liden’s Kyoto studio, led in this instance by the ex-Kyoto Animation Yuichi Ito; he left the studio where he matured after moving away, then briefly worked at ufotable before taking his first chance to return to Kyoto. There he joined Liden’s substudio, where a bunch of creators who worked at KyoAni in the past have reunited. Although they’re still restricted by their parent studio’s often messy state, they’re by far the most talented crew Liden’s got to offer. Since more Liden episodes are likely awaiting in LWA’s horizon, I’m hoping one of them is entirely made by their Kyoto team with the likes of Kazuya Sakamoto and Rika Ota in charge. Their delicate touch could give us a very special episode.

Two script writers? Ithought this felt like there were a few stories crammed into one with this episode.

It doesn’t necessarily mean anything, but it’s rather unusual and might be the reason you felt it was a bit of a confused episode.