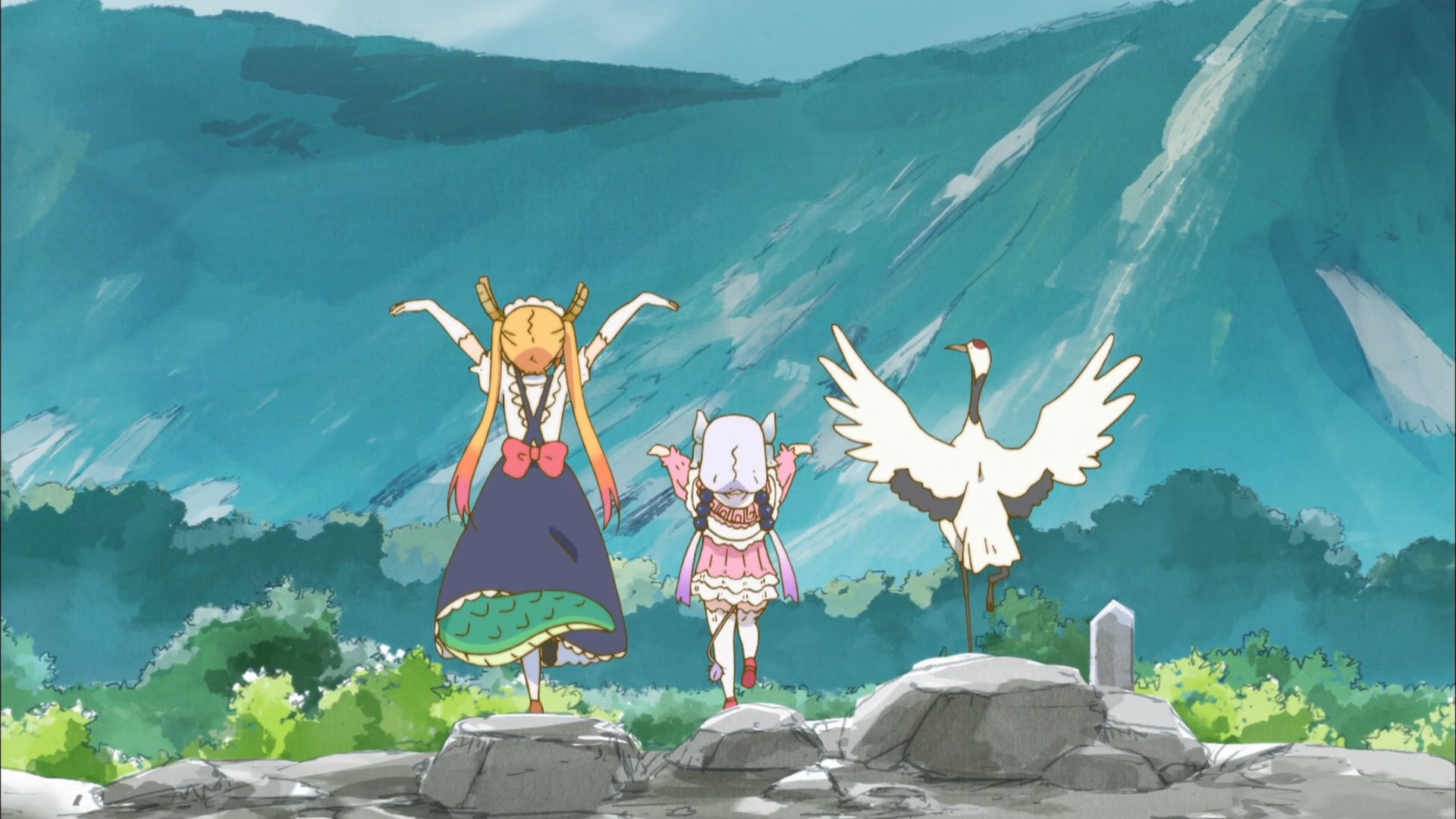 KyoAni is beginning to unleash its strongest staff on this project, and that’s always excellent news. This bizarrely poignant and warm family adventure continues.

— Kanna is in her own world while the adults talk is still the best recurring background gag in the series. Just look at her failing to master the chopsticks! There are plenty of things the source material already did very well, but her character and everything that surrounds her have been elevated so much by the adaptation that it hurts to even compare. Sometimes it feels like Takemoto wished he could direct a parenting series, so he sort of manufactured one with the material he was given.

— Right off the bat you can feel Taichi Ogawa brings something new to the table, especially with shots where the photography department takes the center stage like this. Matters aren’t so simple that you can classify anime as either clean-looking or effects-heavy, but Maidragon is definitely closer to the former. Ogawa’s handled episodes on projects like Tamako Market and Amagi Brilliant Park that also were relatively restrained in that department, but this show is generally even more subdued. And that philosophy clashes with his personal approach that’s been maturing over the last couple years, hence why we get some scenes that feel a bit different. This is not a complaint, mind you – I thought they looked great! Always amusing to see directors sneaking in their preferences within productions with a different personality, though.

— Chiyoko Ueno was easily the star of the party. She’s always been a fan favorite as far as KyoAni animation directors go, and episodes like this make it obvious why. She lives up to the studio’s beasts like Seiichi Akitake and Nobuaki Maruki when it comes to excruciatingly detailed drawings, but projects like this feel like the canvas she’s most comfortable within: a very lively cartoon where expression is king. Her episode features more stylization of the designs than anything else before, but no two faces are alike; rather than switching between a standard and a simplified SD look, there are many degrees to it.

— Scene by scene analysis would take way too long since the entire episode is fantastic, but there’s a certain sequence that marries technical draftsmanship and what’s usually perceived as “writing”. Kobayashi’s absolute jerk of a boss only moves in smear form, not so much a visual indulgence as a way to portray how he’s a pompous, angry showoff who overly articulates all the time. Tohru repeatedly making him trip is an amusing punishment that hides some drawing gems, but that’s not simply a gag; you’ve become too much like human beings, said her dragon pal later on. This isn’t the same dragon woman who was willing to kill their neighbors for being too noisy anymore. 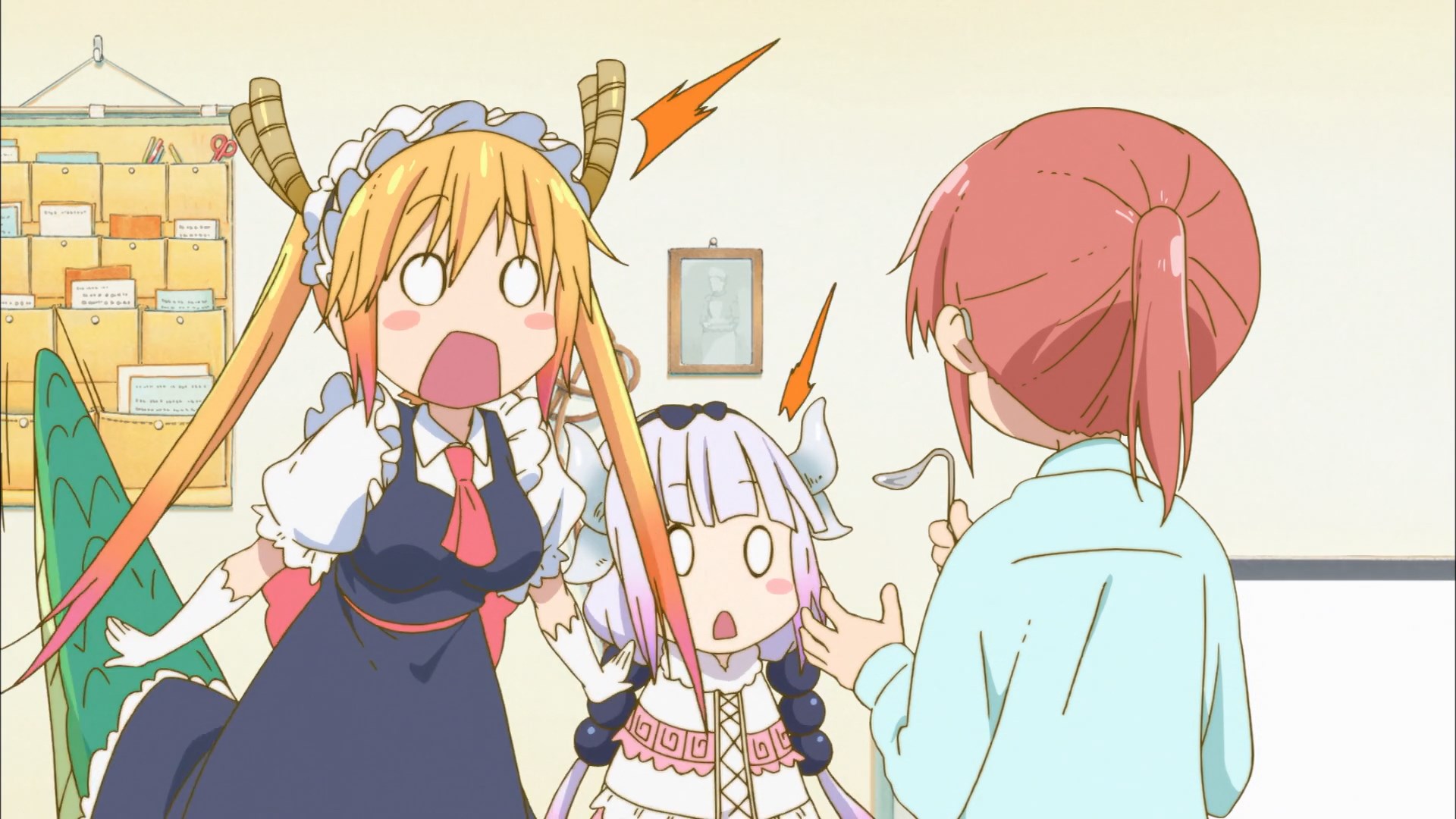 — The theme with this episode’s key staff is people who aren’t good at holding back. Their approach to the animation was far from economic; no concerns about cutting corners, everything moves and does so for a reason. The mob characters display personality through motion, while every scene with the main cast can potentially turn into springy cartoon goodness. The movement spent on background elements and distance shots was particularly impressive; whether it’s a fun short cut or a long sequence where Tohru walks in dorky fashion to portray her baseless confidence, it’s a lot of effort spent on things viewers likely won’t pay attention to. Dogakobo’s best production assistant and one of the strongest young animators they’re affiliated with joked about wanting to become KyoAni after this excellent Ogawa/Ishidate episode. Can’t blame them.

— Two small key animation units at play this week. The first one contains some of the studio’s best animators like Akitake and Kunihiro Hane, so the thoroughly excellent work in the episode is no surprise. And you might recognize the group assisting them as well, since they’re the exact same lineup that animated all of the second episode of this show. As I mentioned when covering Euphonium, these tiny units within the studio sometimes intercalate one episode where they just do a bit of clean-up assistance before their next main job. Since episode 2’s director and supervisor will be handling episode 9, chances are that will be this small crew’s last big endeavor within this show.

— Weekly background art appreciation corner: still gorgeous, and I’d like to give some attention to the color design as well. Such beautiful sunsets.

Each episode Kyoani surprises me more, the truth I am more surprised than when I saw Euphonium

Ogawa and Ueno should team up more often, they play off each other really well.

It’s hard to be incompatible with either, since they’re both very talented! Ishidate and Ogawa collaborating always feels very natural though, master and student are very comfortable working together still.

I can imagine that.

Also if all three of KyoAni’s beasts (Ueno, Maruki, Akitake) all worked as animation directors on an episode, I think I’d be so excited I wouldn’t sleep for days.