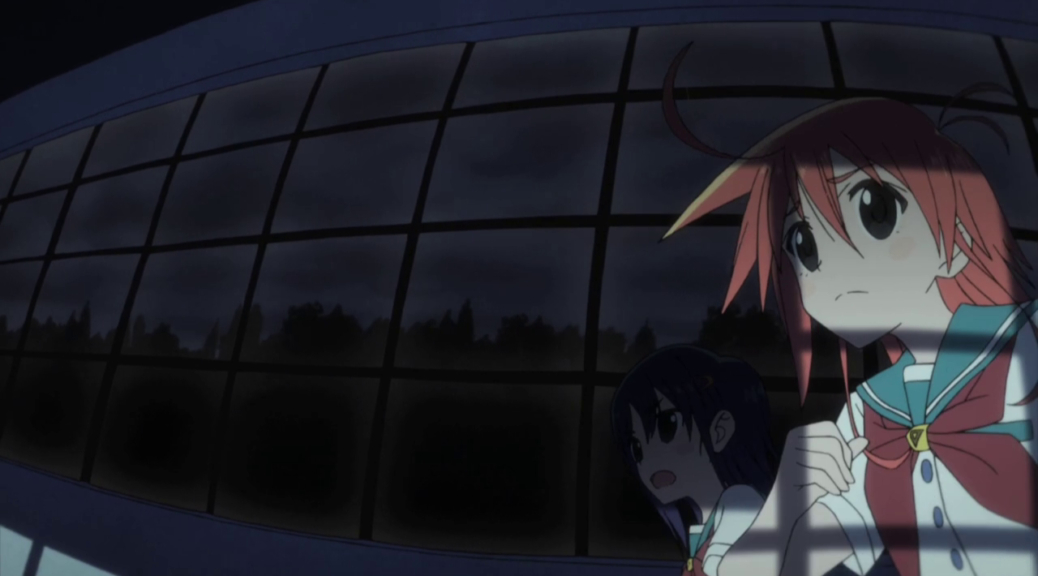 Girls get trapped in a Pure Illusion that’s like their own school. A spooky version of it.

Now that was one atmospheric Pure Illusion. Instead of focusing on exploring a new world, the episode took our two protagonists back to their own school. That alone sounds quite terrifying; in the life of a student, being sent back to school in your own free adventure time has to be the worst nightmare. Now imagine being a student who is trapped in a nightmarish version of it that looks as if it came straight out of a horror movie. And by trapped I mean quite literally.

I think the episode was cleverly planned to air around Halloween. While it didn’t feature any of the usual imagery related to that particular festivity, the episode had many horror elements that we tend to associate with this time of the year. Unremitting rain, deafening thunders and candles being the primary source of light are the tropes that have been used in horror films since the birth of the genre. As girls explore this version of their own school in search for a fragment, they go through a series of typical cat scares – with Papika taking on the role of a cat – until they meet the other students. They soon get used to their unusual appearance and voices and get trapped in a time loop. To emphasize the effect, creators used another frequent horror trope – a creepy doll. As the doll turned around everytime the girls fell asleep, the narrative was hinting at the possibility that the doll is conscious. That was as you’d expect revealed to be true in the final act.
The theme this week wasn’t horror alone though, that much is immediately obvious. The idea that they are stuck in a loop is quickly established through shots lacking the 12th hour, and clock imagery becomes more prevalent as the episode progresses. And of course, the setting of the episode is a clear reference to yuri fiction; the all-girls academy reminiscent of the catholic schools in series like Maria-sama ga Miteru, the polite gokigenyou greetings often associated associated with the genre, the delicate atmosphere and refined club activities leading to notoriously charged moments, and of course the myriad of unquestionable metaphors. Who knows if the show’s undercurrent of sexual awakening is going anywhere, but that was one unequivocally gay episode.
Overall I thought it was very satisfying on a visual level. The layoutsLayouts (レイアウト): The drawings where animation is actually born; they expand the usually simple visual ideas from the storyboard into the actual skeleton of animation, detailing both the work of the key animator and the background artists. had good depth to them and Studio Pablo did a great job on bringing them to life with their background art. The color design was as deliberate as always. The animation itself was rather limited once again but had its highlights during the final showdown in the clock tower, and even some pleasantly elastic cuts here and there. 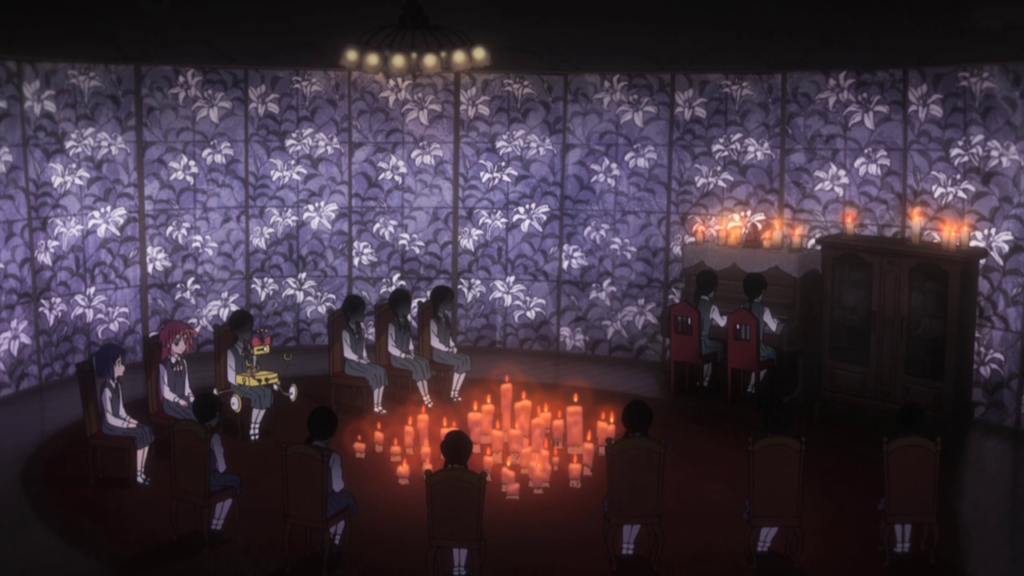 The episode was directed and storyboarded by Ryohei Takeshita, a freelance director whose biggest job so far was taking on a role of an assistant director on last season’s New Game!. Next spring, he’s scheduled to direct an adaptation of Eromanga Sensei, a light novel from the creators of Oreimo. Despite the episode being quite reserved on the animation side, the staff list was really huge. 2 animation directors, 3 assistants and 25 key animators isn’t a thing you would expect to see in episode 5 of a well scheduled show, moreso on a low calory episode like this one. Animation directors were both female. Sayaka Koiso previously worked as a regular staff member at the studio with the best logo ever, most notably as a character designer on Rokka no Yuusha. Ayako Takahashi on the other hand is acquainted with Studio 3hz, having worked with them before as a regular animation director on their previous project – Dimension W. The animation highlights happened in the clash between Yayaka’s team and our protagonists in the clock tower. Hironori Tanaka animated Yayaka kicking Papika and Cocona smashing the bell. The sequence of both teams running up the stairs also featured some nice movement.

Every week I end up thinking this show does so many things right. So why do I have that tingly feeling that there’s something missing? I’m not enthralled by the show as I should be but can’t really pinpoint what’s wrong with it yet. Nonetheless, I’m having fun following this show weekly and maybe that’s enough!

I think the main thing is that the editing of the show is a bit off sometimes. We had two end of episode cliffhangers so far that were more or less totally ignored in the next episode. This makes it hard to figure out where the audience is meant to be at, emotionally.

Thank you very much for your weekly coverage of the show, it really is interesting. I think this is a show you have to analyse through different spectra in order to understand it fully, and reading your articles gives yet another point of view on it, deepening the reflection. SPOILER I would just point something here: the consciousness of the creepy doll. Although the realisation point at the beginning for it to be conscious, I think it is more a marker of the loop. The doll “moving” during the night is just her coming back to her initial position when… Read more »

Not like it needed confirmation, but Studio Pablo tweeted that the theme of the episode really was a combination of horror and yuri, balancing that eeriness with refined beauty https://twitter.com/studio_pablo/status/795241082346819584

I’m sorry to say that this is unrelated to Episode 5, but I would like to point something out, the series seems to have some sort of focus on time, the first image being a sand clock (also 2 woman facing each other “Illusion”) and then the time references in the entire series (even in Episode 5). When Cocona wakes up the clock on her phone says 6:33 (presumably morning), when she fixes her skirt (Notice how they bring focus on the clock) with her “RIGHT” hand, the time says something about 10:00 am/pm (which is not unthinkable to have… Read more »

This is absolutely my favorite episode so far.
I love this series and continues to surprise with every episode.