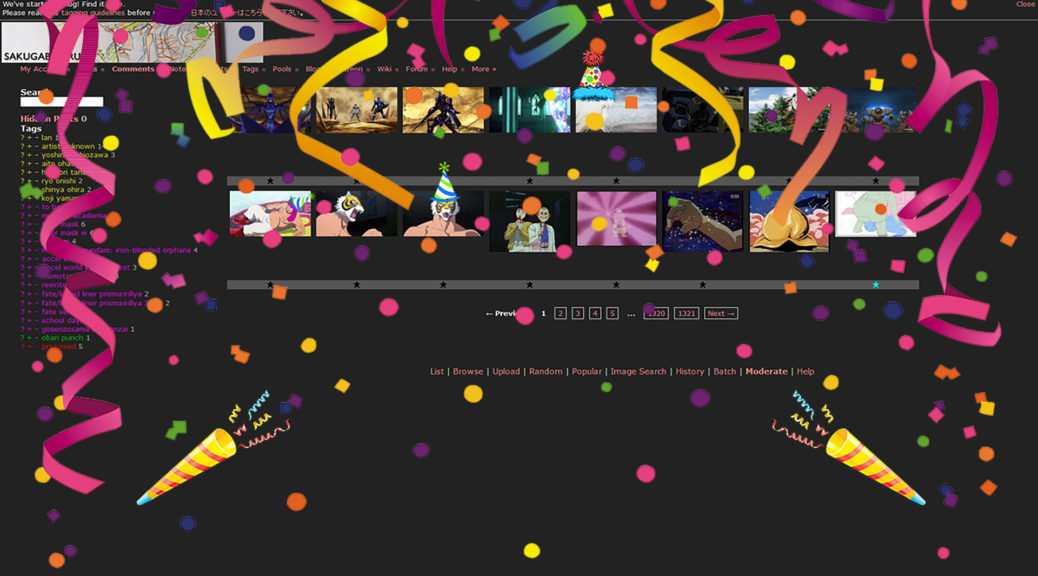 Just a few days ago we hit our very first Patreon goal, which was certainly cause for celebration! Not only have we established that there’s some demand for the content we’re putting out, but we’ll also be able to fulfill our primary goal in moving Sakugabooru (and this blog alongside it) to its own independent server. Why is that such a big deal, though? Let’s find out.

As we’ve stated before, Sakugabooru currently runs on the server of an acquaintance who was kind enough to give us the space for it. Not much of an issue initially, considering it was just a small thing thrown together after some half-hearted discussions on IRC. Surely it wouldn’t transform into something much bigger than anyone involved in those discussions could imagine later down the line, right?

Above are some statistics regarding the traffic Sakugabooru has received since its conception. You can see almost immediately that traffic has been – and still is – continually increasing as time goes on, to the point where we can’t exactly call this a small project anymore. There’s a worldwide audience keen on surfing through the archives at their own leisure, backed up by the fact that we have a mere 35% bounce rate. For those who don’t know what that means, it’s a figure determining the number of people who leave the site after viewing a single page; that means about 65% of the booru’s visitors are hooked enough to go check out other uploads once they’re done with their original business. Not too shabby!

The most interesting statistic though is that Japan serves as the booru’s second largest audience, and they’re only trailing behind by a very small margin at that! There’s been a lot of curiosity regarding their usage of the booru, so here’s resounding evidence that it’s not just something that we western fans can take advantage of. Even more interesting is that we know for a fact that a lot of people within the industry also make use of it, some of which even have accounts and help tag people they worked with in uploads! Not just on the JP side, either; professional western animators have been seen commenting on the site itself, tagging work they were involved with like their Japanese comrades and talking about it on Twitter, and even one of our regular users found himself overjoyed when his work made it onto the booru not too long ago. Sakugabooru’s rather massive archive has turned it into a tool that many people can make use of; from fans who just want to see some cool animation, to those within the industry – or aiming to be – who see it as a tool for studying. And it serves as a great portfolio for people keen to show off their work, too!

All of that said and done, moving Sakugabooru to an independent server is important in and of itself because, well, it makes us independent. Piggybacking off another person’s server and bandwidth is never ideal for something that still clearly has potential to expand its userbase even further, so we want to ensure that unforeseen circumstances can’t knock what has become a valuable resource for multiple parties offline with no warning. Not only that, but this should also help us eliminate issues with it running slow for some users; you can’t go wrong in ensuring that everyone has a streamlined experience, after all. Our super admin aers is currently in the process of sorting everything out for the eventual move – scheduled for sometime this month – and taking care that it all goes as smoothly as possible, but it’s important to note that your continued support once it’s all said and done still matters! We may have reached our initial goal, but now the priority lies in making the experience even better and ensuring we can keep it going as long as possible. Not just through the Patreon, either! Sakugabooru’s come as far as it has thanks to everyone who’s taken the time to contribute to it, so if there’s something you feel is worth uploading, don’t be shy!

So happy to see you guys making it! Decided to back last night, as that second goal sounds incredibly appealing to me. More in depth production information is always something I want more of.
Maybe my favorite thing about this site, currently, other than just looking at awesome animation for hours on a daily basis, is being able to get this close to actual creators that I’ve idolized for so long. Having them actually using the site so much is really awesome. Keep up the great work!

Thanks a lot! We’ve received a lot of positive feedback regarding the second goal, so we’re looking forward to the possibility of being able to go through with it!

Industry members using the booru really did come as a pleasant shock for all of us though, no doubt especially so for those that were involved in joking about making the site in the first place. It’s nice how we only had a handful of contributors initially, but now there’s a fair amount of people passing by and uploading stuff too, so hopefully that keeps up.

Nice to know this is getting more popular. I love the blog. There aren’t many active blogs focused on anime animation. This one has the right content and the right frequency. On a side note, do you think you could ever post your 25 (or more) top anime list based solely on animation?

I guess we could make that into a post of its own, featuring the top lists of the people writing on the site while briefly detailing why they’re there. Personally I’d struggle because I’m awful at ranking though!

100% sure I’d struggle more with that than I have with any other post so far.

And those were a real struggle.

What about using alphabetical order instead of ranking?

That does sound easier!

That’s all my clicks since Mob Psycho and Flip Flappers released!

Regarding options for contribution to your blog, could it be one-time-off? I’m happy to contribute whenever I feel like, but make it monthly isn’t really ideal for me.

EDIT: Oh, donations-wise? You can just sign up on Patreon and cancel the pledge when you can’t afford it.

Out of curiosity, why was the goal for a new server $600/mo? That’s _a lot_ of money for serving web traffic. You could have ~8 servers each with 32GB RAM and 2x2TB disks and their own gigabit NIC for that price. That’s 32TB of storage, 256GB of RAM and ~2.4PB of traffic a month.

We’ve stated this before actually, but the goal was never purely for the server costs. The intent was always to both gauge interest in the blog itself and determine whether or not we should start investing money into keeping the booru afloat. In terms of the former, more support meant more content; it’s hard to justify dedicating significant chunks of time to something people aren’t invested in, after all. Just as an example, I’m a full time translator, so my daily routine while the Cinderella Girls translations were going up was finish actual work -> use all my free time… Read more »