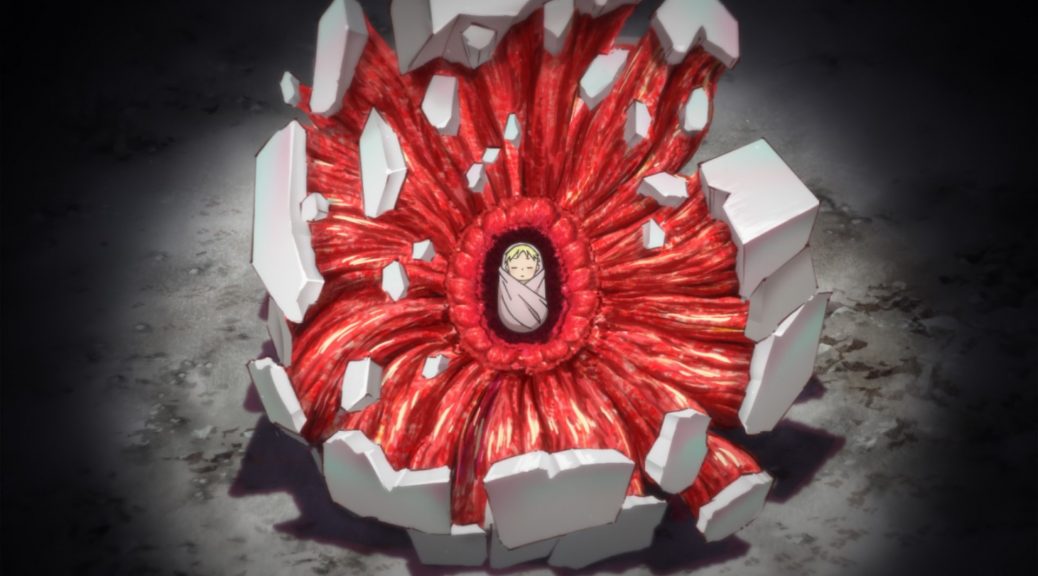 A less spectacular episode of Made in Abyss this week, but perhaps an even more information-packed post. Since we can’t delve into the abyss this week, let’s instead explore Kinema Citrus and its new subsidiary studio, as well as the creators’ approach to this work. We even get to highlight some interesting indie artists!

— While a downgrade after the first episode is often to be expected when it comes to TV anime, cases like this still sting; it’s not that episode 2 was particularly weak, but it highlights just how brilliant the first one was. There are two major factors at play: the obvious production decline, as well as the content itself. The latter easy to grasp – the hand-picked material for the first episode was meant to be an effective hook, so they still had to get the less thrilling standard introduction out of the way. As graceful as the show has been, this episode has also let through some of the exploitative manga content, but I’d rather not go there yet. The issues when it comes to the craft are a bit more pervasive, and they hurt expression and polish in particular. Here’s hoping the production decline isn’t sustained, and that the show returns to its more intriguing approach when they walk into the abyss once again.

— NHK World’s imagine-nation walked into Kinema Citrus to check out the inner workings of Made in Abyss. One of the highlights was the series director Masayuki Kojima mentioning how by congregating much of the staff in the same place (temporarily bringing over the art department their company doesn’t have), they were able to achieve gorgeous cohesive work. That’s an idea that lines up with the way the strongest studios have been operating, but it’s become an amusing remark when days later we’ve had an episode produced elsewhere. Is it outsourced then? No, since I’m talking about Kinema Citrus’ new subsidiary Gift-o’-Animation. This new substudio based in Gifu (which, yes, is the root of the pun in its name) is led by Satoshi Mori, an animator with roots in mechanical work but who grew to be versatile enough to handle anything action-related. He used to be attached to studio White Fox while keeping links to other companies such as Kinema Citrus, and after becoming a freelance agent for a while he tackled this ambitious project. He recently started directing episodes – such as this one – though that might be out of necessity rather than natural progression of his career, as this new subsidiary doesn’t have much staff to speak of.

— So, what is Gift-o’-Animation like? As I’ve been saying, very small. Not only is Satoshi Mori its president and single (newbie) director, the co-supervisor this week Yasuko Tada appears to be their only animator of note as well, since she’s done animation direction work for everything the studio has worked on so far. Their presence became noticeable during Scorching Ping Pong Girls, where they assisted Kinema Citrus’ main branch for a few episodes while also doing minor tasks regularly. In that regard, we can already see some growth, since they genuinely were in charge of this episode…animated by freelancers of course, because they don’t have a proper team yet. In that regard, Gift-o’-Animation is playing a very long game; they explicitly only recruit newbies doing digital animation, all of whom are currently drawing in-betweens or doing painting and composite work. Kinema’s CEO Muneki Ogasawara brought them up when asked about KyoAni-like in-house approaches, and he openly admitted they’ll take a long time to mature. I can’t help but feel that they’re approaching it in a smart way, though; a modest initiative that can’t be costing them a massive amount of resources and thus isn’t forced to immediately prove itself successful, but that is already showing a little bit of positive evolution nonetheless. If the instruction process of the young artists is successful, I could easily see Gift-o’-Animation growing to the size where they can properly support the main branch, like the Ufotable Tokushimas and Animation DOs of the world. I’m wishing them luck! 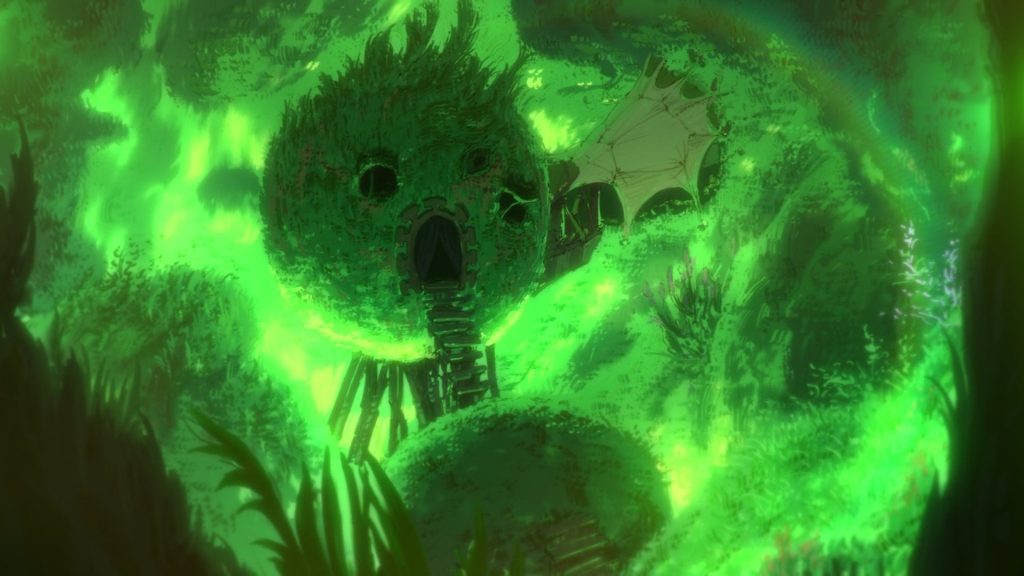 — Despite having started by pointing out that this isn’t on the same level as the first episode, the show’s fundamentals are still incredibly strong. Part of it comes down to the fact that the director Masayuki Kojima storyboarded this episode as well – even without a team capable of flawlessly executing his vision, the ideas are strong enough to carry the show. And so we’re still treated with a myriad of layouts highlighting the verticality of the world; at this point they’re so prevalent that I don’t buy any reading about this being a coincidence, and knowing the creative team put this much thought into how to present the world makes me happy. Again, what Kojima said about working together rings true – the world feels so cohesive because art team and animators worked side by side. Also, while the animation majorly lost its vitality, the basic visual portrayal of the characters remains consistent as well. This is particularly obvious with Riko’s spirited acting, which even includes some recurring quirks now. All in all, plenty of reasons to remain hopeful about the production!

— The second half of the episode in particular invites optimism. It recovered that sense of elegance, showed how wide the series’ visual lexicon can be, and even felt like a more polished effort. Since the episode had two animation directors, chances are that they each got assigned half of the episode, which would explain the quality of the drawings improving as well. Scenes like the very first one after the break had some of that theatrical presence from the first episode. And speaking of more general positives: jeez, this is still such an enchanting world. Leaving the abyss was a risk, but the surface is fascinating all the same. It’s not just the vertical architecture that attracts the eye, even simple alleyways are very attractive.

— There isn’t much animation for me to highlight, but since this is going to be a recurring role I feel like I should mention that Takeshi Takura will work as an animation supervisor specifically for the props. He designed them to begin with, and I had expected him to actively work on correcting their drawings – it’s not that I’ve suddenly become clairvoyant, just that his desk had a Prop Animation Director note. There isn’t much of a secret here, his job will be to ensure all the tools and extraneous objects are properly drawn.

— Both the opening and ending arrived this week, and I unexpectedly ended up enjoying the latter more. The surprise comes from the fact that the opening was directed and storyboarded by Ryosuke Nakamura, an old favorite of mine. He presented the abyss as a beautiful world bathed by his enticing lighting, and perhaps more importantly, his partner Mieko Hosoi delivered some of her striking illustrations once again. Sadly, I feel like the tone is a bit off, perhaps due to the song. I would have loved something much more in line with the show’s soundtrack. I’m more thoroughly positive about the ending, which was produced by the indie studio PLAMOV; it turns out they were big fans of the source material, so this was the perfect chance to trust alternative artists. The idea behind the sequence isn’t all that fancy, but descending this adorable abyss every week is going to be a joy…albeit a bit of a mood whiplash sometimes, I imagine. The adorable drawings and textured feel was all this cute adventure needed, so I’m perfectly fine with its relative simplicity. And while we’re at it, I wholeheartedly recommend checking out PLAMOV’s showreel, which highlights the work of the artists involved here. From 2D animation inspired by the likes of Rapparu to an editing showcase, it’s well worth the less than 2 minutes.

That song in the opening is so weird! I wish the insert song was the opening, this song sound so odd at the middle; but I can’t hate hate an opening that features Daft Punk! Well, the characters were a lot less polished this episode, which made me kinda sad, but at least it seems all the less polished scenes from the PV 2 were all from this episode, which makes me hopeful the rest is better. By the way, that bird-dragon-Kanna thing Riko saw at the telescope was gorgeous!

Yeah, I loved that feathered dragon too. I’m glad they’ve got someone of Aninari’s caliber to adapt the designs of creatures and come up with his own. Even when he’s not drawing them they have a very strong presence.

Haha, well I was dead wrong about the dodgy content being cut. I guess we may be in for the full unadulterated abyss experience after all! *shudders* And of course, the world still looks gorgeous. I’m not really too upset with the visual downgrade, as that’s inevitable with this sort of show (or with any anime series, really.) The question is how well it will handle occasional budget drops, and so far it still seems pretty graceful. The art direction helps a lot, as the characters and designs look great regardless of how many lines they’re drawn with. I’m still… Read more »

I disagree about there being an extremely noticeable drop in quality, especially with the character acting, which I found every bit as inspired as in the first episode. Nice write-up, though: I did not know about Gifu-o’-Animation (that pun)!

Thanks for the lovely read! I personally didn’t think the episode suffered too much in terms of quality, Gift-o’-Animation did a good job.

Great article, though I’d be interested to know what you find ‘exploitative’ about that scene. It’s not like it was fanservice

The scene in question is more fanservice-y in the manga, and I think that after it was mentioned but not shown in episode 1, some people didn’t expect it to show up at all.

As the other commenter said, it took half a page in the manga and /definitely/ was framed attempting to be suggestive. The anime is a lesser offender (and it’s even one of those vertical layouts I’ve been praising!) but it’d much rather they skipped it like it seemed they were going to do.

I still don’t really see who or what is being exploited, but I agree it might have been better left out