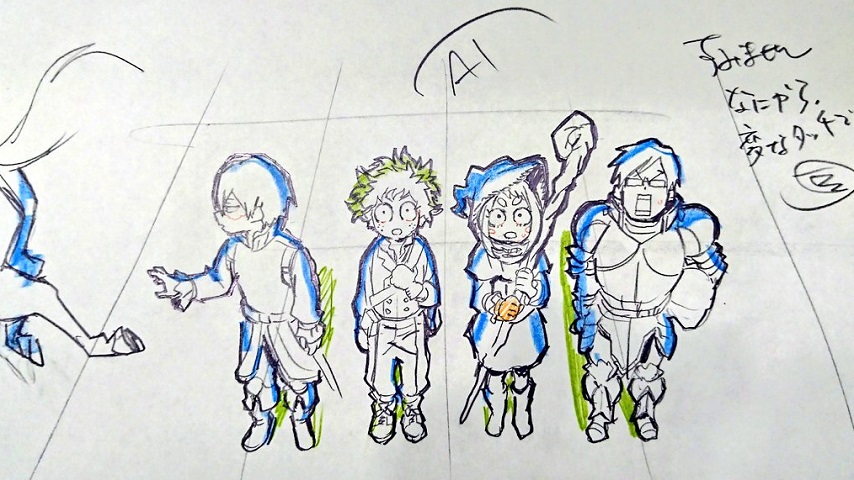 Everybody’s favorite heroic adventures return after a break, introducing us to a new story arc while delivering exciting new opening and ending sequences to raise our spirits after that cruel period of HeroAca starvation. So as usual, let’s unravel exactly who and what made it all shine.

Despite the break, episode 27 didn’t waste any time to move the story forward, with a swift pacing we don’t always get to enjoy. And taking a bit of inspiration from it, I’m not planning to waste any space recapping the production until now. We’re getting straight to the point.

With the start of the second half, it’s clear we can’t talk about animation teams as static entities anymore. The rotation of animation directors was broken with the interspliced production of the second OVA, while the departure of Yoshiyuki Ito and Kazumi Inadome to another project forced to shuffle things around. The schedule is progressively getting tighter and animation directors are now getting shifted around according to the needs of the production assistants, as their rotation remains unaffected.

The recurring animation direction duo Kodaira-Murai worked under production assistant Masayuki Gunji instead of Yuji Maruyama, who was in charge of all their episodes until now. As usual, Kodaira supervised the first half while Murai did the second. I feel like chief animation director Umakoshi must be satisfied with these two as he doesn’t correct much of their output, which is positive for the series but also saddens me a bit since we get less of his striking drawings. Takashi Mitani proved that he’s one of the faster animators in the crew by supporting them as an assistant, very soon after doing notable work on the previous in-house episode (25). At this point it’s difficult to predict any staff patterns for the future, but this second season has made me confident in their ability to manage the project.

With this episode, Kou Matsuo delivered his fifth storyboard within the show, and he did so as reliably as ever. The episode director was Yuji Oya, whose only previous experience handling a full episode was on the tremendous Mob Psycho 100 #08. What stood out the most this time was the effective use of a 3D model of Gran Torino’s apartment during his fast maneuvers. The second scene using this technique was animated by Kosuke Kato; it may not be obvious at first sight, but upon frame-stepping the scene his Kanada style sensibilities become evident. Yuka Shibata animated Deku’s tough training in the alley, including the passersby which he startled. Worth noting is also the neat transition through Deku’s eye when he activated One For All on his whole body for the first time.

Series director Kenji Nagasaki collaborated with his mentor Seiji Mizushima on the new opening’s storyboard. The latter mentioned on twitter that it was Nagasaki’s unique vision that lead to such a satisfying result, mostly crediting him for the success. However, Japanese artists tend to undervalue their own work so I would take this remark with a grain of salt, and for now praise them both equally.

The strength of this opening is rather unusual: it resides in how well the animation reflects the lyrics of amazarashi’s fantastic theme song. Only after reading them you really grasp why the sequence was structured this way and get to appreciate it to its full extent.

Yoshihiko Umakoshi collaborated with sub-character designer Hitomi Odashima on the animation supervision, possibly because he had to leave the production early for the Anime Expo. This project has stayed healthily ahead of the broadcast, but these sequences are almost always animated rather late all the same! Its key animator lineup is remarkable due to a handy technical detail – the artists appear in order of appearance of their work. Ken Otsuka confirmed he animated the very first cut of Deku cutting through smoke and posing. Yuuta Kiso then presumably animated All Might’s landing. Yuka Shibata handled the shots featuring Ochaco, Momo, and Bakugo right before the chorus. Washio presumably drew Stain, while Yuki Hayashi animated the following cut of Todoroki unleashing his flames. This was the first time Hayashi was credited under his real name since he left Toei Animation last month and went freelance.

My gut instinct tells me that Iida’s sequence right after was uncredited work by Norimitsu Suzuki; he’s a fantastic animator, perhaps BONES’ most technically gifted one, known in particular for his ability to emulate three-dimensional space within 2D animation. He rised to fame by directing and solo animating various ending animations, like all of Fullmetal Alchemist‘s and Soul Eater‘s, or Death Note‘s first ending amongst many more.

Yuko Dangi then presumably animated Deku jumping between buildings and his confrontation with Shigaraki. Masaya Sekizaki handled the shot of Tsuyu and Tokoyami, Takashi Mitani drew Bakugo’s crazy maneuvers near the end, and Koji Sugiura finished off the sequence.

This new ending sequence was surprising both in terms of content and staff-wise. Hiroko Utsumi is a former employee of Kyoto Animation’s Osaka branch Animation Do. After working there for her whole career and being able to direct her dream project about swimming boys Free!, she parted ways in 2015 and went freelance. Her popularity has allowed her to bounce around projects that fit her taste for light tasks like this ending and the one she directed at MAPPA for Days. Things definitely have worked out for her! She took Kohei Horikoshi’s illustration displaying the results of a character popularity poll and adapted that aesthetic into a 90 seconds long animation sequence. Seeing the whole main cast as characters in a RPG-inspired setting was a fun gift nobody could have expected in advance, and I’m very thankful for it.

The ending is mainly composed of still shots, so the long list of key animators may appear rather misleading. Yoshihiko Umakoshi brought along a few of his work buddies like Mitsuko Baba, Yumi Kobayashi, Aiko Sonobe, and Takahiro Kagami to contribute with some drawings. The extremely talented youngster Shu Sugita, who solo animated Eromanga Sensei‘s ending last season, is credited on the top of the list. Maybe it was him who animated this final outstanding shot?

Thanks for the useful post and the information about the production coming with it, liborek!

I really need your help, i have a question about disc sales because of a brazillian blog. First, i am Brazilian, and in Brazil, there’s a blog/youtube channel about anime, where the owner of the channel predict new season of every anime based in these itens: 1. Disc sales (he use the Mababi line) 2. Grow in sales of original material (LN and Mangá) 3. If the studio make new seasons 4. If the original publisher make new seasons and, i started to have doubts about his method, and i searched about this topic, and today i don’t trust him… Read more »

A slight nitpick on the lyrics translations: I’m pretty sure 何を失ったとて means something more to the effect of “no matter what I lose” rather than “because of what I’ve lost”. Not that this undermines the connection between the lyrics and the images.