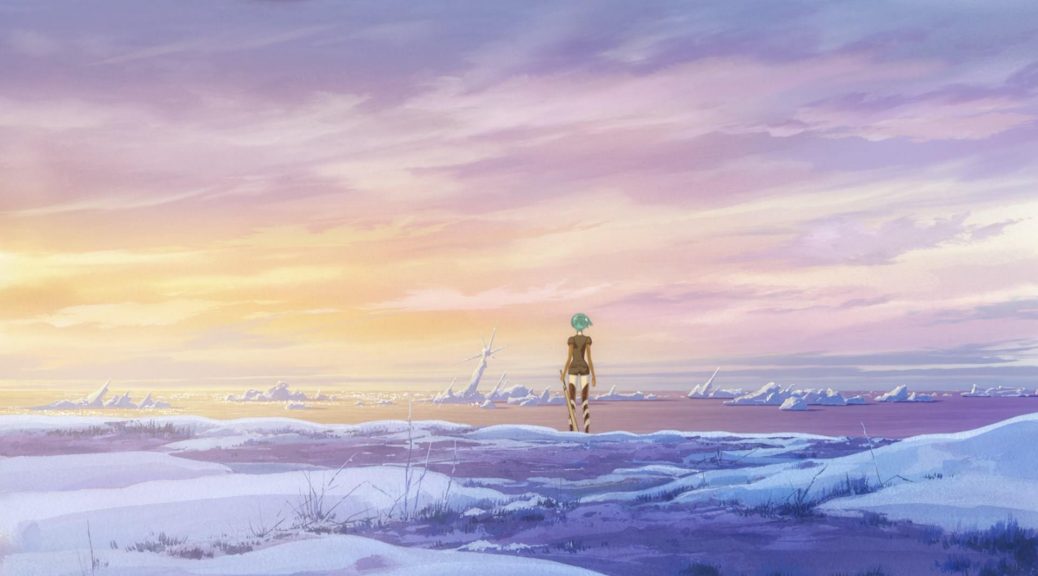 Over the last few weeks, Land of the Lustrous has nonchalantly pulled off some of the best work we’ve seen in TV anime this year. The already unique source material happened to overlap with exceptionally talented anime staff, both veterans and newcomers – something that stands true for the show as a whole, but even more so when it comes to this arc in particular. Let’s learn the secrets of this fascinating production.

─ A bit of a breather, for this show’s standards at the very least. I consider its ability to remain amusing even at the worst of times one of its greatest assets, so episodes like this are more important than they might seem. In fact, one of the most whimsical moments here managed to impress me just as much as the massive emotional peaks in this arc; the tempo throughout the scene where Phos struggles with the winter duties, particularly here, is outrageously good. The musicality of the scene mostly comes down to the perfectly timed delivery, which isn’t something anime relies on all that much.

─ When covering the first half of the show I already talked about Kenji Mutou as perhaps the brightest directional figure in the series, and although his contribution was limited to the storyboard this time, it’s still worth noting. His episodes are dominated by symmetrical imagery, both of his own creation and borrowed from the manga, so I find it entirely unsurprising that he’s consistently handled Amethyst’s material; their striking introduction was his idea, and it’s arguably the sequence that has utilized the twins the best. Symmetrical compositions are both attractive and sturdy, so I feel like it’s a very good fit for a show about gems to begin with.

─ Speaking of notable creators, Yoko Kuno returned as she’s training under episode director Shinichi Matsumi. I recently wrote about her short yet fascinating career and her impressive irruption into professional animation, where she’s quickly proven she has the potential to become one of the big faces in anime. So that this isn’t only an advertisement for another article, let me add this: Kuno herself noticed the post and was happy about it, which made her check out the rest of our series about outstanding up-and-coming creators. She then revealed that Toei’s young ace Megumi Ishitani, one of the first directors we chose to highlight, had actually been her classmate, to which Ishitani reciprocated. Somehow, two of the most promising stars in this industry were actually childhood friends all along – if that’s not anime, I don’t know what is. 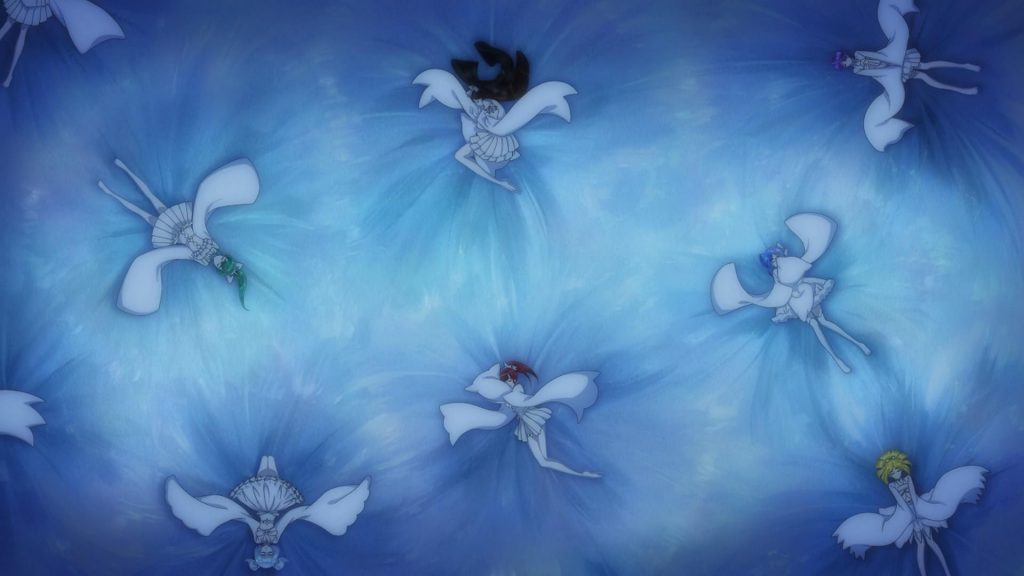 ─ I don’t think anyone would find it disappointing if the show happened to peak here, since this episode is already stronger than you can reasonably expect TV anime to be. Every positive aspect about Land of the Lustrous is neatly condensed into a memorable package; an increasing sense of dread is balanced out by that surprising levity it manages to infuse Phos’ misadventures with (their mild disappointment when realizing they can’t quite pull off the usual pointing gesture with no arms is somehow adorable)… and then it happens – Kyougoku contrast, as seen in the second episode that he also personally handled. Though as similar as the depiction is, Dia’s worries seem like child’s play when compared to Antarcticite’s stoic final moments, proving that the gradual escalation of the conflict has had more of an effect than it might have seemed. The choice to go with hand drawn animation to depict that scene feels cruel in a way, since the gentle delicacy only makes it hurt more.

─ Phos’ unleashed rage was an immensely important moment, and the staff were plenty aware of that. Not just that, they knew it required the kind of personal expressiveness that this production doesn’t excel at, so it needed something special. And when it comes to Japanese animation, Norio Matsumoto is as special as it gets. He’s widely considered one of anime’s best action animators, though that is a bit misguided as far as I’m concerned. If you asked me, I’d say that Matsumoto is one of the best character animators who happens to like action; sure he’s penned many memorable fights, but even those sequences stand out due to how emotionally charged they are, which is exactly what was required here. That’s why he was requested to draw 2D animation as pre-visualization footage, to guide the 3D artists with something much more tangible than a storyboard. In the end he drew over 200 cuts, including the whole second half of the episode. All the show’s regular staff were delighted by his contributions, so proud of them that they’ve managed to get them included as a bluray extra. Arguably makes the purchase worth it by itself.

─ One of the challenges for the anime staff was turning its fighting scenes into sequences with comprehensible progression. I’ve previously stressed out that the comic is all about moments, a succession of striking illustrations that happen to be one after the other rather than an uninterrupted stream of actions; this isn’t to say that it’s unconcerned about the flow, as shown by its powerful usage of repetition, but that’s more about the effect on the reader than the content itself. Fortunately, once Kyougoku decided to give free rein to the action veterans at studio Orange for the fights against the Lunarians, these have turned out to be yet another highlight of the series. This is of course due to the work of the animators, but also the actual integration of the music into the rhythm of the action. Even though pre-scoring (audio recorded before visuals) isn’t often feasible or even inherently better than the alternative, this production is by all means benefiting from it.

─ I can’t bring up the audio and not dedicate a special mention to Tomoyo Kurosawa. She’s been blessed with roles like Phos and Kumiko that encourage this fascinating naturalistic delivery, but those opportunities wouldn’t have presented themselves to begin with if she weren’t able to pull them off. Her acting range within the episode was already mind-boggling, and then that ending comes and makes you wonder if she’s not human either. Concept artist Yohichi Nishikawa painted the backgrounds the song played over, by the way.

─ As many people pointed out, Phos’ recovery bears striking resemblance to Kintsugi, the art of repairing with gold. It definitely feels like the kind of thing Haruko Ichikawa would do, considering how much she’s thought about the presentation of the gems through details like their black outfits representing mourning clothes.

─ If the previous episode is the bombastic tragedy, this one is the dull pain that comes afterwards. Just seeing Phos’ new form hurts the viewers who had grown so fond of their whimsical self, and the show quietly respects that. Their mere appearance is a source of sadness… but also amusement, embodying the show’s curious mix of calamity and silliness. I’m not entirely sure why it feels so right to see Dia run away with Phos’ gold arm and have the entirety of gemdom freak out in various ways, but it does. While you’re lost in existential worries, wondering if Phos is still Phos after quite literally losing themself, they make flowers and grow and extra hand to say goodbye to the twins. No one was ready for this emotional rollercoaster.

─ The arrival of winter presented neat developments. Chances to learn more about the customs of gems like their hibernation when the sunlight they draw energy from is at its lowest, but also an entirely transformed world under the snow. The show’s background art has always been excellent, but at this point new artboards were becoming few and far between. The new locations and redone winter versions felt like a breath of fresh air. Frozen, even. And in the same way, spring once again brings new colors to this world.

“It definitely feels like the king of thing Haruko Ichikawa would do,” Kind of thing?

Oops, thanks. I’m so enthusiastic about the show I accidentally crowned it.

>While you’re lost in existential worries, wondering if Phos is still Phos after quite literally losing herself
themself 😉

Thanks, slipped with the pronoun at the end.