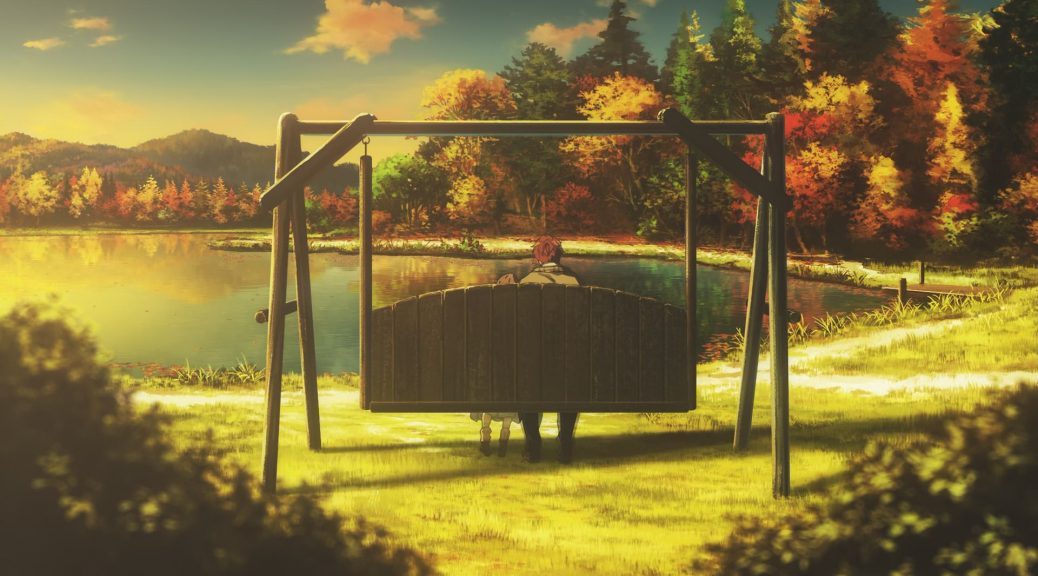 Perhaps the most important episode of Violet Evergarden on a narrative sense since the premiere, as well as an interesting change in tone that also brings back the grandeur of the first episode. And beyond that, another chance to examine the production of the series and details some fans have asked us about, like which tools were used to create this series.

StoryboardStoryboard (絵コンテ, ekonte): The blueprints of animation. A series of usually simple drawings serving as anime's visual script, drawn on special sheets with fields for the animation cut number, notes for the staff and the matching lines of dialogue. More, Episode DirectionEpisode Direction (演出, enshutsu): A creative but also coordinative task, as it entails supervising the many departments and artists involved in the production of an episode – approving animation layouts alongside the Animation Director, overseeing the work of the photography team, the art department, CG staff... The role also exists in movies, refering to the individuals similarly in charge of segments of the film.: Takuya Yamamura
Animation DirectionAnimation Direction (作画監督, sakuga kantoku): The artists supervising the quality and consistency of the animation itself. They might correct cuts that deviate from the designs too much if they see it fit, but their job is mostly to ensure the motion is up to par while not looking too rough. Plenty of specialized Animation Direction roles exist – mecha, effects, creatures, all focused in one particular recurring element.: Miku Kadowaki, Chiyoko Ueno, Yuki Tsunoda

Key AnimationKey Animation (原画, genga): These artists draw the pivotal moments within the animation, basically defining the motion without actually completing the cut. The anime industry is known for allowing these individual artists lots of room to express their own style.: Tatsuya Sato, Minoru Ota, Maiko Hado, Yurika Ono

─ Now this is more what I came to expect after the first episode: personal tragedies delivered with enough grandeur to justify the cheesiness of the whole affair. It’s definitely louder than episodes like Yasuhiro Takemoto’s and Naoko Yamada’s, but in a way I feel like it’s Violet Evergarden at its most cohesive: an opulent production that shamelessly yet sincerely wants to pull at your heartstrings in a grand way. This episode’s climax became the perfect encapsulation of that approach, as a ridiculously ambitious sequence triggered a heartbreaking flashback also handled by the studio’s flashiest character animator. I’ve said before that this isn’t really my style of choice, but this was an excellent execution of what they’re attempting to do. Between this show and Atsuko Ishizuka’s wonderful YoriMoi, anime is currently doing a good job at selling me the prospect of personal stories being screamed out loud.

─ The main responsible is none other than Takuya Yamamura. He was actually asked if he would contribute to this show at the studio’s event back in October, a question that he vaguely replied yes to since at that point he had already handled this episode. Not that his presence is much of a surprise, but this was clearly deemed a very important episode, so it’s easy to see why he decided to keep quiet. I don’t think it’s a coincidence that it returned to the premiere’s tone the one week where the most important narrative developments so far happened, and even though the overarching story is still the point I’m less invested in, I have to say that Yamamura did an exceptional job with them. The scene with tormented Violet in particular is incredible: the cut from her bloodstained hands to their lifeless replacement, the complimentary layouts, that self-back and forth – I honestly wasn’t sure what it would take to get me invested in Violet’s character, but now that’s a good start. Even if I don’t necessarily agree with the series compositionSeries Composition (シリーズ構成, Series Kousei): A key role given to the main writer of the series. They meet with the director (who technically still outranks them) and sometimes producers during preproduction to draft the concept of the series, come up with major events and decide to how pace it all. Not to be confused with individual scriptwriters (脚本, Kyakuhon) who generally have very little room for expression and only develop existing drafts – though of course, series composers do write scripts themselves., I understand why it took so long for the show to reach that point, and I’m glad that it was executed peerlessly.

─ As a final, quick side-note about the episode itself that I might return to later since it’s shaping up to be one of this show’s best assets: I love how easy story has its own color. Not a single tone, but a very particular palette that gives it a unique identity. The greens, yellows, and reds of this tale are nothing like Violet’s previous adventures, as has been happening since the episodic content truly started. Making the best out of the format in this regard.

─ If you read the post about the previous episode of the show, you’ll recall that the main theme was that Kyoto Animation appeared to have changed their usual approach, which meant that this series has a very limited pool of creators at its disposal. Since this was the first episode produced at Animation Do, the Osaka branch of the studio, you’d think that maybe that issue would have been addressed – but that clearly wasn’t the case. Kyoto’s Chiyoko Ueno and Yuki Tsunoda returned yet again, having supervised the animation in 5 out of 7 episodes so far, even this one that wasn’t even made at their part of the studio. Animation director Miku Kadowaki being a bit busy is understandable as she’s likely preparing Tsurune’s anime adaptation, but the line-up is missing some Do animators even though their output on Violet Evergarden as a whole is going to be much lesser than usual. The staff in Osaka tend to animate 3-4 episodes per series, including some handled by Kyoto directors, which is obviously not going to happen in this case. Once again, it all leads to the conclusion that KyoAni’s staff has been segmented per projects this time around, and when it comes to Do that means some people should have started animating Free! S3 early.

─ There are some things to say about the animators who did contribute to the episode, though. It’s no surprise that ace Tatsuya Sato worked on the emotional climax as I previously mentioned, but I see traces of his animation even in the earlier outburst. His timing is more restrained than usual, but there’s still few people who can get across the violence of emotions like he does. Among the clean-up animators there are a couple of things worth noting too. The TV debut of Momoka Yoshizaki as a new key animator is of course good news, but the most interesting piece of information in the credits is the presence of Keita Nagahara, because he left the studio a while back. As a freelancer, this season he’s contributed to Darling in the Franxx #3, After the Rain’s opening and #3, and Slow Start #1/#5 – many interesting points of reference, because now we know for a fact that all of those were animated considerably after Violet Evergarden #7, despite all of them being earlier work in their respective shows. Again, this show’s schedule is extraordinary.

─ The studio put together a compilation of the snippets of production materials they had been sharing, which is a good excuse for me to address all the curious people who have been asking about the tools used to make this anime. Here’s each major step:

“There’s a reason that Yamada’s most trusted Do director is Yamamura”
Funny you should point that out as I thought I felt a bit of Yamada influence in the storyboard, like the preference for shots with a bit of distance and from behind objects http://imgur.com/a/HJPUw which reminded me of A Silent Voice, where this kind of shots caught my eye.

He actually used similar shots in the segments of A Silent Voice he personally storyboarded too!

Ah! I didn’t know about that for some reason (I went and checked it now, he’s listed even in the ANN Encyclopedia entry for ASV) , but that probably explains everything more accurately.

Hey I use Max every day too, it’s cool to know they use the same stuff. May I ask your source on that particular point? Anyway, thank you for keeping up with these informative posts, they’re great.

These are all a combination of thins visible on production materials snippets and having seen them make the show at the studio event, which had a production zone where they relocated desks from the studio to showcase the production process (for episodes 7~9 of this show in fact). Here you can see it: 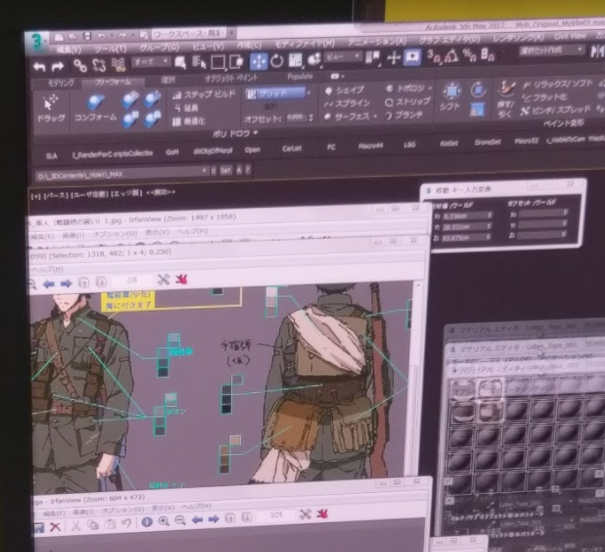 Ueno and Tsunoda have been overworking themselves I feel.

Looking back to this post, I wonder: is there a way to know which episodes of KyoAni shows are produced at Animation Do, and which come from good old Kyoto? Besides checking the backgrounds of all the animators credited for each episode, I mean. They always just seem to credit Do for アニメーション制作努力 for entire shows and call it a day at that…

Since at the end iof the day they operate as a single studio, there aren’t per-episode notes to attribute them to either location, so you’ve got to be acquainted with who belongs where (easy enough to keep track but I should just share a list with it to help out people I guess)

If you’re asking regarding Tsurune, the first episode was technically an Osaka one but half the animators were from Kyoto

You’re right, I was wondering about how they were handling Tsurune since the director and CD are from Do but, unlike Free!, Tsurune is credited as a Kyoto prod. Thanks for the answer!