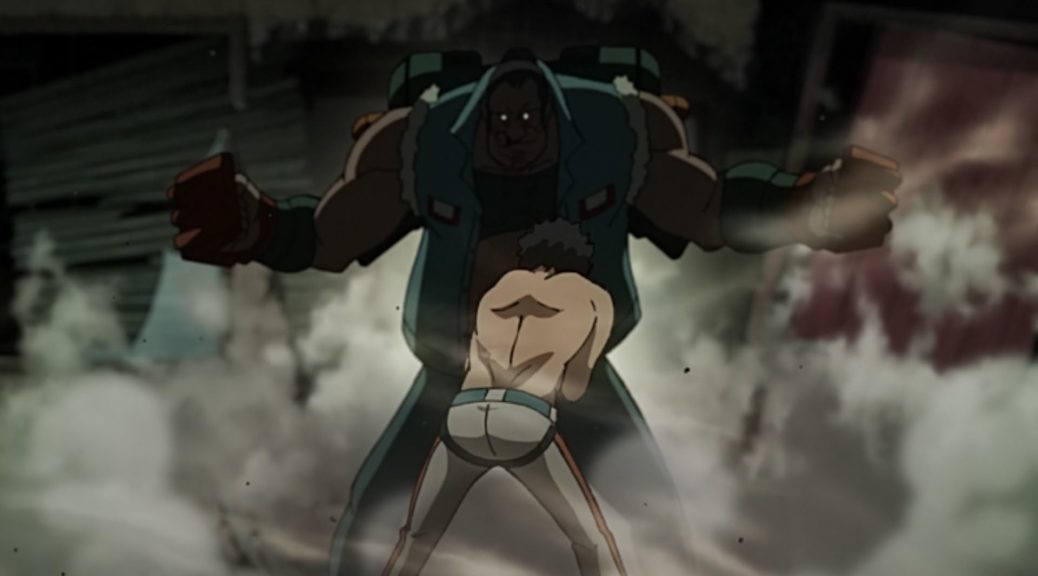 We’re back with another episode of Megalo Box, since it doesn’t seem to get tired of featuring outstanding work. Things have changed quite a lot this week though: a director with personality and very different priorities arrived to offer the most characterful episode so far, which he personally key animated alongside only one other artist. Quite the achievement!

Key AnimationKey Animation (原画, genga): These artists draw the pivotal moments within the animation, basically defining the motion without actually completing the cut. The anime industry is known for allowing these individual artists lots of room to express their own style.: Takaaki Wada, Hiroki Harada

─ I have to admit that I’m positively surprised when it comes to this show. Not by the fact that Megalo Box is quite good, which I already anticipated in the seasonal preview, but rather by its consistency in all regards. A preparatory episode like this was the perfect chance to relax after the first major beat in the series, but instead we got the most emotionally charged episode yet and quite the production feat in its own right. This comes by the hand of Takaaki Wada, who provided the storyboards, directed the episode, supervised the animation, and was one of the two 1st key animators – quite the workload, all executed in impressive fashion! A major reason why Sachio and the kids (a blatant reference to Sachi & co from Ashita no Joe) immediately click as people comes down to Wada’s characterful storyboards, full of extraneous movement that makes the cast feel alive; the animation itself can be on the rougher side when compared to other works of his, like his solo episode of Yama no Susume, but the lively approach to character expression hasn’t changed one bit. Wada’s storyboards aren’t glamorous, nor are they as smartly put together as Jiro Kanai’s work last week, but they make a great effort to make everyone act out the script to the point of exaggeration, succeeding more in terms of sheer volume of theatrics than through nuance. And while that might sound like a back-handed compliment, I really do mean that he succeeds, since this is definitely the strongest outing on a character level. While the setting and gritty aesthetic have been the dominant elements in the introductory episodes, this time around the focus was more personal.

─ Wada was accompanied by Hiroki Harada, an equally renowned character designer and animator who in this instance served as co-supervisor and the only other key animator… sort of. The huge clean-up crew and that roughness here and there I mentioned earlier tell us that while Wada and Harada achieved the impressive feat of key animating the episode on their own, their work was at least partly rough genga or straight up layoutsLayouts (レイアウト): The drawings where animation is actually born; they expand the usually simple visual ideas from the storyboard into the actual skeleton of animation, detailing both the work of the key animator and the background artists., hence why a bunch of other animators were required to finish the job. A caveat to keep in mind, but episode 3 is far from a reason to worry – in fact, it’s a pretty encouraging sign when it comes to this production’s health. Wada has been fairly busy and even showed up as the animation director for the opening of the unfortunate Golden Kamuy, indicating that he had the time to leisurely put together this episode even if he couldn’t quite polish it. Being an anniversary project doesn’t ensure you a stable schedule in this messy industry, so we should celebrate Megalo Box‘s so far quite positive situation.

─ Despite the assistance required and some choppy cuts (which honestly don’t feel out of place in the reboot of a classic title), the animation this time around is very interesting. Previous episodes had emphasized the bold character art to increase the coolness factor that’s key to the series, but Wada’s priorities are very different. Harada appears to have handled the first half of the episode, which peaks with the scuffle at the store; the generous usage of almost comedic smears and the wilder timing and poses offer a new register for the animation in this series, which I personally welcome. Wada tags in for the more thoroughly acted second half of the episode, though the undeniably cool final confrontation has me wondering whether the workload was cleanly split in half as it tends to happen in these situations. It’s not as if Wada hasn’t been animating some scenes with that slight degree of exaggeration in recent times, but the sequence feels closer to something Harada would draw. Fortunately the staff are quite open regarding the ins and outs of the project despite the animation crew not having much social media presence, going as far as including making-off features in every volume of the blu-ray release, so we might be able to find out the details regarding this episode in the future.

─ I’d like to end with a quick note regarding the design work, since it plays an even more important role than usual in this production. Series directorSeries Director: (監督, kantoku): The person in charge of the entire production, both as a creative decision-maker and final supervisor. They outrank the rest of the staff and ultimately have the last word. Series with different levels of directors do exist however – Chief Director, Assistant Director, Series Episode Director, all sorts of non-standard roles. The hierarchy in those instances is a case by case scenario. and concept designer Yoh Moriyama shared a couple of imageboards that led to some of the most memorable shots in the second episode. He confirmed that his intention was to highlight the contrast between the high-tech city and the decrepit slums as we’d already been mentioning, though there are some interesting new details: namely, the big change in the color palette. Moriyama had been toying with much more vivid world at the beginning, as opposed to the ashen tones we see in the show itself. And as beautiful as the concept art is, I can’t say I disagree with his decision to move towards something much more restrained, that lends itself better to the dirty postprocessing and seems to fit the show’s tone better. There are many changes to anime during its pre-production stages that we rarely get to hear about, so we should be glad that a production supported by such a cohesive vision is being so open.

I’m a fan of Takaaki Wada, so it’s cool for him to show up here. I think I first became really aware of Wada from his impressive Tsuritama episode, and then found out from Anipages (http://www.pelleas.net/aniTOP/index.php/takaaki_wada) that he was long known for favoring unusually dense character animation. His speed and prolific output means he doesn’t always get to shine, but when he does, oh boy, it’s a real sight to behold.

I was telling someone else earlier that his episodes feel like they star characters that are just a bit too eager to act their part, with movement that seems superfluous and a bit silly but that nonetheless gives them a lot of soul. In an industry where a conservative approach is the norm, his work is very welcome.

That CGI shot at the beginning with the poligonal crowd was quite shocking, considering they have gone the extra mile to make the show look old with the 480p->1080p thing, but then they make a scene completely out of place as that one.