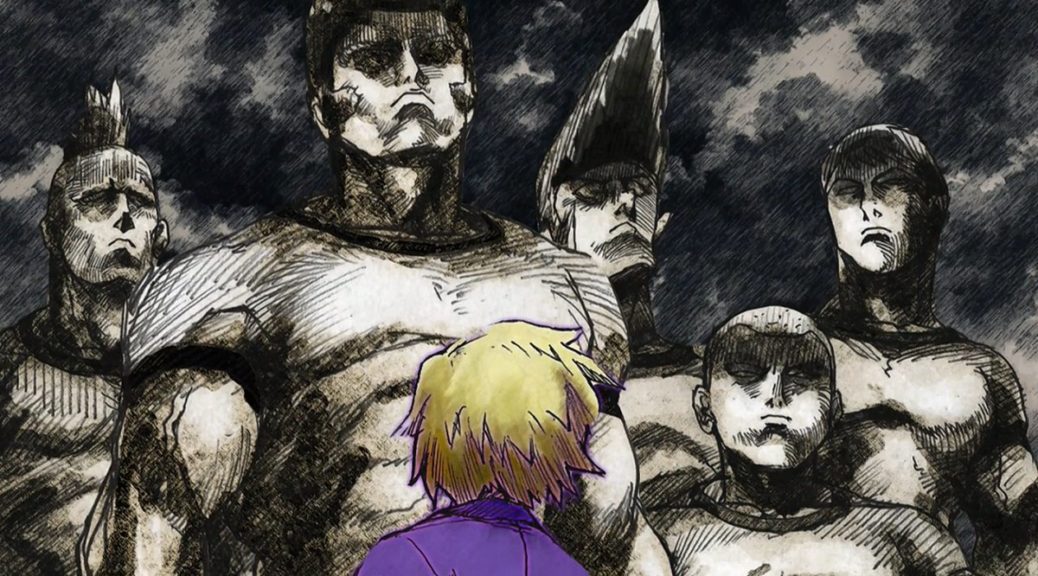 TV anime episodes handled by a single key animator are a rarity nowadays. When it comes to latenight series, only a few shows with balanced schedules or short length can afford them. And with this episode, Mob Psycho joins their ranks.

Sara Moroyuki – an animator that came out of nowhere and who nobody knows anything about. Is it her real name? Is it a pen name? We have no idea who she is, but what I do know for sure is that her career is quite unusual. The first time Sara Moroyuki appeared in a credit list was for key animation on Giovanni’s Island, a high profile Production I.G movie featuring many of the industry’s top animators. Very extraordinary way to debut. No inbetweening stage as most animators have, and no previous credits as key animator for lesser projects more open to newbies. Add to that the impressive quality of her work in the film, and as a result people ended up thinking that her name was Mitsuo Iso’s pseudonym. Admittedly a bit of a stretch, but speculating where Iso was hiding all these years – moreso now that he’s sort of confirmed he kept on working secretly – has been a pastime for Japanese animation fans for a while. It doesn’t seem to be the case at all in this instance, but it still feels Sara Moroyuki is a pen name of some very experienced and talented animator.

Episode 4 was clearly what you could call a budget-saving episode – not misusing the term in the way the internet loves to, it simply was a less visually demanding endeavor handed to a single key animator. It was more static than the previous outings, with rather limited animation and a not too ambitious storyboard. Tachikawa was once again in charge, this time proving his boards can be very effective even in minimalistic ways. It’s reassuring that the series director has a solid grasp on the overall production and knows which episodes can afford to be milder, especially when we know there’s more action coming up soon.  Having a single person doing key animation for all cuts, even with a number of second key animators cleaning up and polishing the rougher drawings, saves a lot of trouble for the production side as well. The production assistant doesn’t have to keep an eye on dozens of animators, and that leaves them extra time to focus on the next episode they’re in charge of. When it comes to one cours shows running for one season, each production assistant handles two, maybe three episodes. Which means that as long as things don’t collapse, episodes like this aren’t only cheaper to produce, but they also free up time – unless your name is Sara Moroyuki – for upcoming developments. As I said, things can go wrong; a key animator who isn’t ready to handle a task this massive can end up causing more trouble than the solo episode is worth. But if things go well, and it seems like they did, these only make the overall production smoother.

And let’s be fair – the episode is rather impressive on its own right! Moroyuki’s approach was clearly different from her predecessor; it contrasts with Gosei Oda, whose artwork was mostly clean and simplistic, with thick and rough outlines. Moroyuki’s drawings on the other hand don’t have that striking line thickness, her art is more detailed and dirty. Her linework stands out in a different way; she used lots of sketchy lines to highlight shadows, which was most apparent with the body improvement club. I feel like she was following Kameda’s designs fairly closely, but not being quite as idiosyncratic as an animator as him, instead of just poorly copying the designs she decided to add her own spin to the animation and do what she excels at. Her animation gives a feeling that it was drawn by somebody who’s been working in the industry since the late 80s – something else that lines up with the idea that it’s an experienced animator under a pseudonym. Whether that’s true of not is up to your imagination (or Japanese fans, knowing how these things tend to go). I recommend frame-stepping through the scene where Teru blows away Onigawara with his psychic powers. Pay attention to the dark shadows on Teru’s face and shirt and the impact frame. It’s delightful.

That’s it for today. The preview for next week’s episode looked very exciting, so you’re all invited to share your guesses about who will be in charge of the spectacular animation in the comments. See you!

“you’re all invited to share your guesses about who will be in charge of the spectacular animation in the comments”
He’s baiting the commenters to say NORIO MATSUMOTO and then get sad if it doesn’t happen. This evil man.

Is it not nakamura?

One could argue that it’s part of the “heta uma” ethos of the manga: to draw things in a juvenile way. It’s hard to know when it comes to this MS100 anime, which is as slick as it is rough, and very whimsical.

[…] which is all thanks to Tachikawa and his crew’s talent. Additionally, there’s a hubbub going around the sakuga community about a solo key animator, Sara Moriyuki, for this episode who looks to be having a lot of fun […]