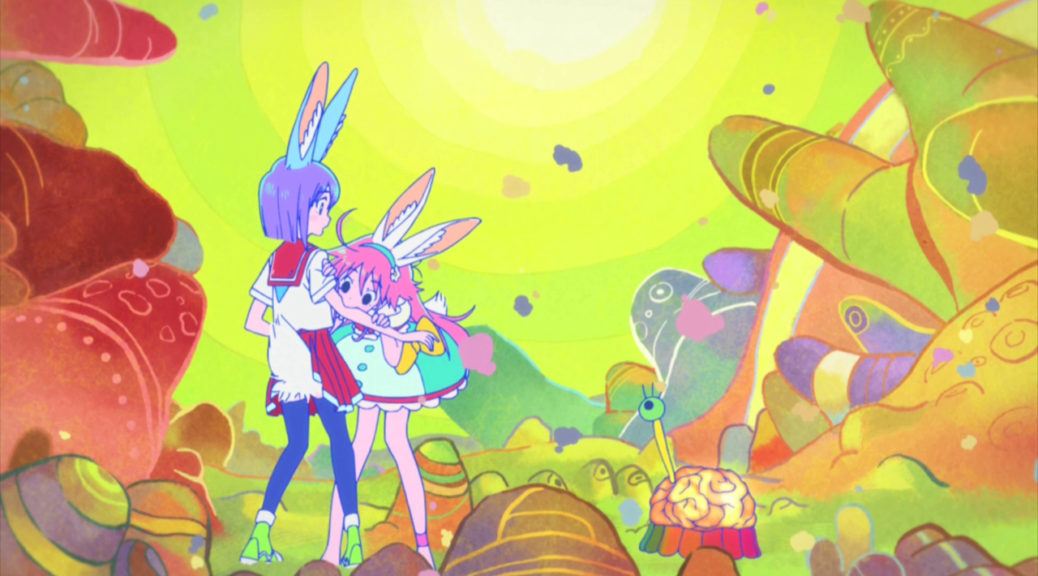 Down the rabbit hole we go – into another wild fantasy world straight from the mind of Kiyotaka Oshiyama.

Episode two followed the same formula as the premiere – two halves, one in Cocona’s world and the other within Pure Illusion. The difference however was that Cocona’s world no longer seemed mundane, since the introduction of an alien element – Papika herself – transformed her everyday life; it was hard not to fall in love with her, as her well-intentioned cluelessness kept on causing amusing incidents. I think I might have been more fond of this part of the episode than the Pure Illusion adventures this time around – which may sound weird coming from a post focused on visual execution, considering that once again the design work for the exotic settings (not simply within the fantasy world, there are very deliberate decisions elsewhere) was impeccable. The animation however was even more reserved than in the first episode, and there wasn’t much to highlight other than the obscenely polished drawings thanks to the animation director Hisako Tsurukubo and chief animation directorChief Animation Director (総作画監督, Sou Sakuga Kantoku): Often an overall credit that tends to be in the hands of the character designer, though as of late messy projects with multiple Chief ADs have increased in number; moreso than the regular animation directors, their job is to ensure the characters look like they're supposed to. Consistency is their goal, which they will enforce as much as they want (and can). Takashi Kojima. Thankfully, Studio Pablo’s background art direction was still strong and elevated the less otherworldly parts of the episode. This may be a bit far-fetched, but I think this production – though obviously not the show itself – is in a way similar to One-Punch Man; OPM focused most of its talent on the action scenes and the rest of the series fell visually short compared to them. Flip Flappers seems to be doing a similar thing with its Pure Illusion sequences. Fortunately, it’s still appealing even at its least spectacular. 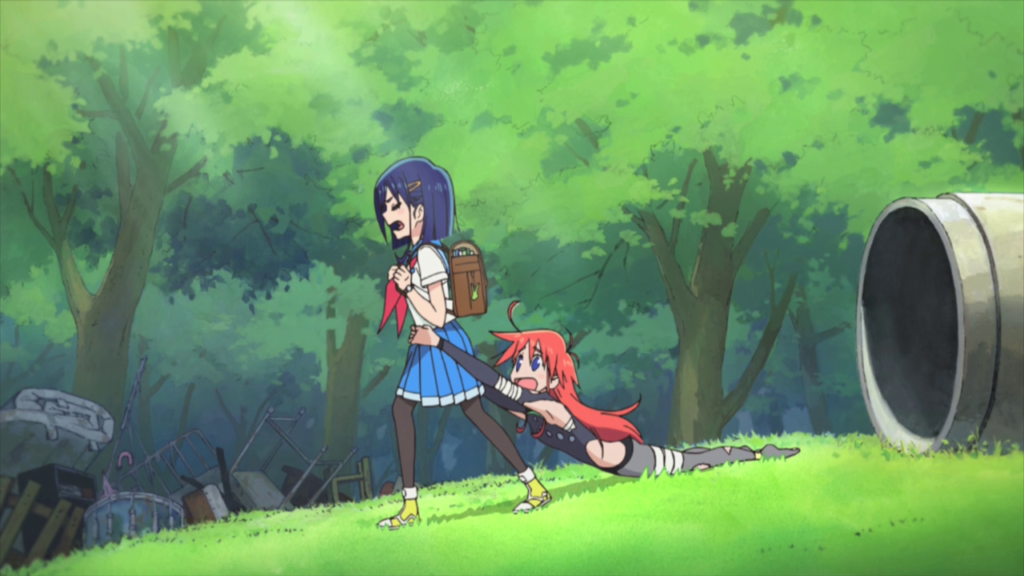 This week’s Pure Illusion was a very abstract and colorful one. Instead of the Ghibli-esque world we saw last week, this world was mostly made of simple and bizarre shapes. Some parts looked like they came straight out of a child’s dream, while some looked like they could spawn quite a terrifying nightmare. Oshiyama seems to be fond of these shapes, so it was no coincidence it reminded me of the setting that he created for his Space Dandy episode. What I’d like to highlight is the work of the color designerColor Designer (色彩設定/色彩設計, Shikisai Settei/Shikisai Sekkei): The person establishing the show's overall palette. Episodes have their own color coordinator (色指定, Iroshitei) in charge of supervising and supplying painters with the model sheets that particular outing requires, which they might even make themselves if they're tones that weren't already defined by the color designer.. The colors on the characters (hair in particular) changed according to the setting the characters were in, which in an environment like this lead to a fantastic wide variety of colors you don’t tend to see in normal TV anime.

The series directorSeries Director: (監督, kantoku): The person in charge of the entire production, both as a creative decision-maker and final supervisor. They outrank the rest of the staff and ultimately have the last word. Series with different levels of directors do exist however – Chief Director, Assistant Director, Series Episode Director, all sorts of non-standard roles. The hierarchy in those instances is a case by case scenario. Kiyotaka Oshiyama unsurprisingly storyboarded the episode again. The episode director Noriyuki Nomata has a portfolio that ranges from working with Seiji Kishi to being regularly hired by BONES’ Studio D. This week’s animation director Hisako Tsurukubo seems to be an acquaintance of Oshiyama from his XEBEC days, where both of them started their career. The assistant AD Naoya Wada animated the wonderful running scene in last week’s episode and seems to be heavily involved in the next episode as well, so that’s certainly a thing to look forward to. The most notable names in the key animator list were Itsuki Tsuchigami (aka miso) and Kazuto Arai – you might have noticed it already if you followed this site last season, but these two seem to be working together a lot. The animator who stole the spotlight however was Isuta, a young animator and notorious sakugaSakuga (作画): Technically drawing pictures but more specifically animation. Western fans have long since appropriated the word to refer to instances of particularly good animation, in the same way that a subset of Japanese fans do. Pretty integral to our sites' brand. fan who among other things animated the winning piece of Animator Expo’s opening footage competition. In the episode, he animated the beautiful magma effects and the frenetic tunnel escape – it’s rather amusing that the first two episodes have already featured two similar setups, both leading to animation highlights.

Next week’s episode seems to be the first real animation festival in the series. That also means another fun adventure, so see you next week!

Space Dandy #9 had possibly the most varied color setting I’ve had pleasure to encounter in TV anime, so the comparison certainly wasn’t off. Coincidentally, Kiyotaka Oshiyama did animation direction for this episode.