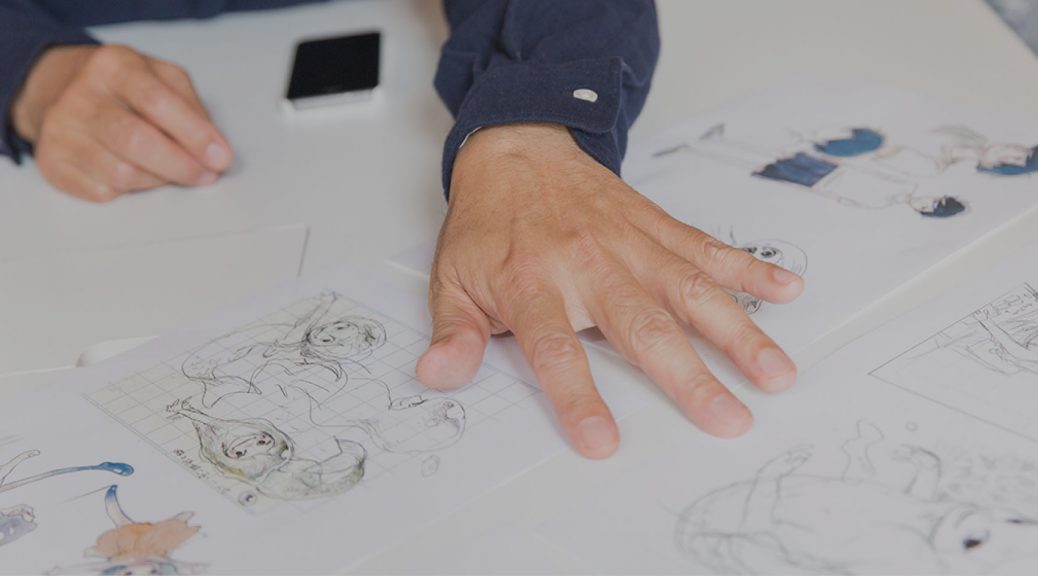 Today we bring you the first half of an interview with the renowned director Masaaki Yuasa regarding his upcoming original film Lu Over the Wall. Here he talks about the themes of the film as well as its cast, while part 2 is more focused on the craft. You can find the original interview on the official site. Internet personality bitmap translated it exclusively for us.

Lu Over the Wall (Yoake Tsugeru Lu no Uta) is an original story, not based off an existing work. Is the main concept of the story, “the drama of a 14-year-old boy opening up his heart,” a subject that you as a director have wanted to tackle for a long time?

Yuasa: I’ve never had any big hits as a director (laughs). So when I don’t receive any feedback, I often look myself up on the Internet and see what the people who have seen my works are saying. I often find responses like “I wouldn’t recommend it to others, but I loved it,” or “I wouldn’t recommend it to everyone, but it was interesting.” I can’t say whether it’s humility or passivity on their part, but I felt it strange that they felt the need to qualify it at the beginning like that. If you felt that you loved it, you should be able to say so without making any excuses.

It’s hard to put yourself out there and say “I love it” about something when not a lot of people like it.

Yuasa: This may not just be young people, but it seems to me that there are many people who don’t like to be thought of as “weird” or “different from everyone else.” When you’re young, the world you live in seems so small, but the world is much bigger than you could ever imagine, and it’s truly full of all sorts of people and places. And out there are places where you can act freely and be tolerated as long as you don’t hurt others. I think that is best. How nice it would be to realize this earlier in life, is how I felt.

So the main character Kai, who only releases his music anonymously, represents that kind of personality.

Yuasa: Before you realize it, you end up trying to match the expectations of those around you. Recently, it feels like if you stray from the norm, or end up on a path everyone thinks is risky, outsiders will pitch in with things like “the experts say this, so there’s no way you can do it,” “come back,” or “change your ways.” You try to take a step forward, but they’re pulling at your legs and stopping you. The mermaid Lu shows up and opens the heart of this boy who’s trapped by this kind of curse.

By “outsiders,” many of the residents of Hinashi Town, the fishing village that is the setting of this story, seem to fit the bill. You might say they symbolize similar insular communities.

Yuasa: I believe that if you say, “I can do it,” you probably can accomplish it. Which isn’t to say there aren’t ups and downs. In the movie, there’s a scene where he learns how to swim. People are strange creatures in that if they think, “I’m going to sink,” their body stiffens up and they sink. However, if they think, “I’m going to float,” they relax and float up. It’s strange, but also understandable. To go further, if you don’t worry too much and let yourself naturally deal with whatever obstacles, you’ll get to where you’re going before you know it. This idea shows up in the lyrics to Kazuyoshi Saito’s “Utautai no Ballad” [“A Singer’s Ballad”] as well, which we use in the movie. Incidentally, I’m actually not that good at swimming (laughs). 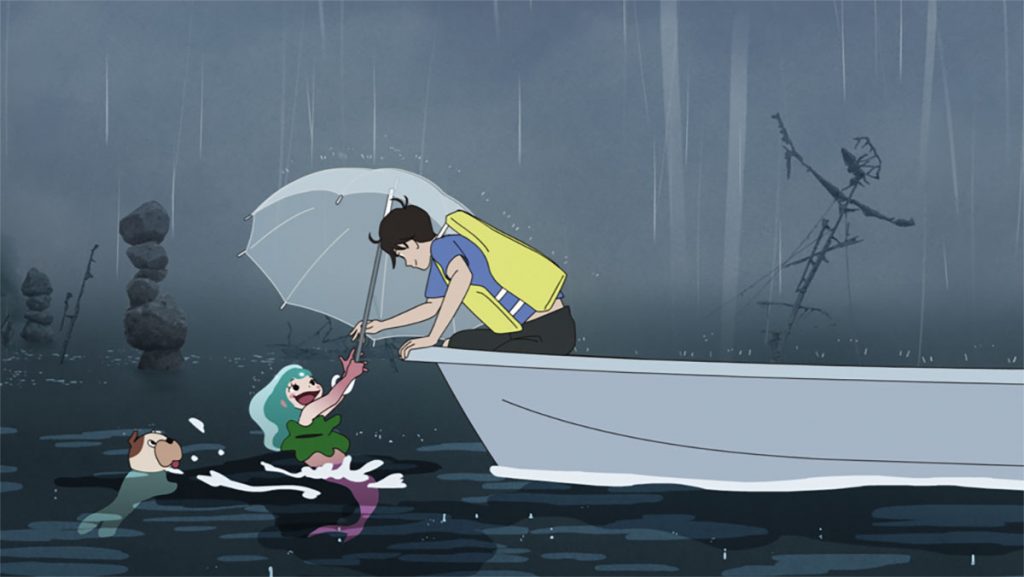 This adolescent tale is told through a cast of characters who are cute in a way that’s a little unexpected for a Yuasa work.

Yuasa: It’s true that up until now, my works didn’t have an art style that followed popular trends (laughs). In fact, I often get comments that say, “it was hard to look at.” This being the case, and wanting to challenge myself as much as I could, I asked Yoko Nemu, whose work has a shojo manga feel to it, to do the original designs. We had considered other possible artists, but I think she’s the only one who could have brought this movie’s sense of world to life.

What would you say the appeal of Nemu’s art style is?

Yuasa: It’s simple and not overly detailed, but you can still feel a sense of realism in its construction. She’s never short on ideas as well. She’s actually the one who designed Lu’s clothes made out of kelp, and I never would have thought to make it so that fish are swimming inside Lu’s head. On the animation side, it was a lot of work to have those fish constantly moving, but we ended up with a fresh new take on the mermaid.

Yuasa: Her father may look like a shark, but he’s a bonafide merman. In the story, he’s been watching mankind for a long time, and has the wits to match, unlike Lu. A long time ago, he preyed upon humans as well as other creatures, and doesn’t think it’s possible to be friendly with humans. However, when he sees that his daughter Lu wants to do so, he restrains himself from eating humans and tries to follow a human lifestyle. Be that as it may, he ends up messing up in some way and causing even bigger problems, is the kind of character he is (laughs). The way he doesn’t eat humans for the sake of his child is similar to how people restrain themselves from smoking for their children.

So Lu and her father are played by Kanon Tani and Shinichi Shinohara, respectively.

Yuasa: There were many actresses with cute voices, but Kanon Tani was chosen for her ability to express Lu’s strong, wholehearted earnestness. It wouldn’t do if we had a seasoned actress too used to acting, but we can’t have it be too “natural” to the point that her lines don’t come across properly, either. She strikes a nice balance between the two in her delivery.

You know, Shinichi Shinohara is actually a judo practitioner…

Yuasa: Shinohara’s really great. I was shocked at how good he was. Lu’s father doesn’t really speak and his lines are mostly grunting, so at first we were thinking of using digitally composited SFX (sound effects) instead of using an actor. But we were right to get Shinohara. He immediately gives us the sounds that we’re looking for. He’s truly a man of many talents (laughs).

Shota Shimoda, who plays Kai, is in middle school (14 years old at the time of recording) like Kai is, isn’t he?

Yuasa: When he shouts with all he’s got, you can really feel it deep down. There were other talented voice actors, but he brings a realism to the role as a real middle schooler that you can’t get at any other age. After all, he was literally maturing throughout the recording process. In the scene where he sings, I told him, “It doesn’t need to be sung well; just shout it out.”

You mean the scene where Kai sings “Utautai no Ballad.”

Yuasa: The song’s lyrics fit perfectly with the structure of the story. Kai wholeheartedly takes all of the pressure that the residents of Hinashi Town feel, shouts it out in song, and lets out his true emotions. As a whole, this movie is the story of a rigid, conservative town that is freed by the singing and dancing Lu brings to them.

Thank you so much for translating the interview and sharing it!!

Haha, that was awesome. Now I feel a little guilty for all of the times, of which there have been many, where I’ve conditionally recommended Yuasa works to friends. It really is hard to recommend them sometimes. More so than most things, they aren’t going to be for everyone, but if you fit into the niche that they appeal to, they are some of the best. I try to recommend things like “If you liked such and such, I think you should check it out” rather than “I don’t think you’ll like it, but I did” which just sounds a… Read more »

Thanks for the translation, very interesting interview!