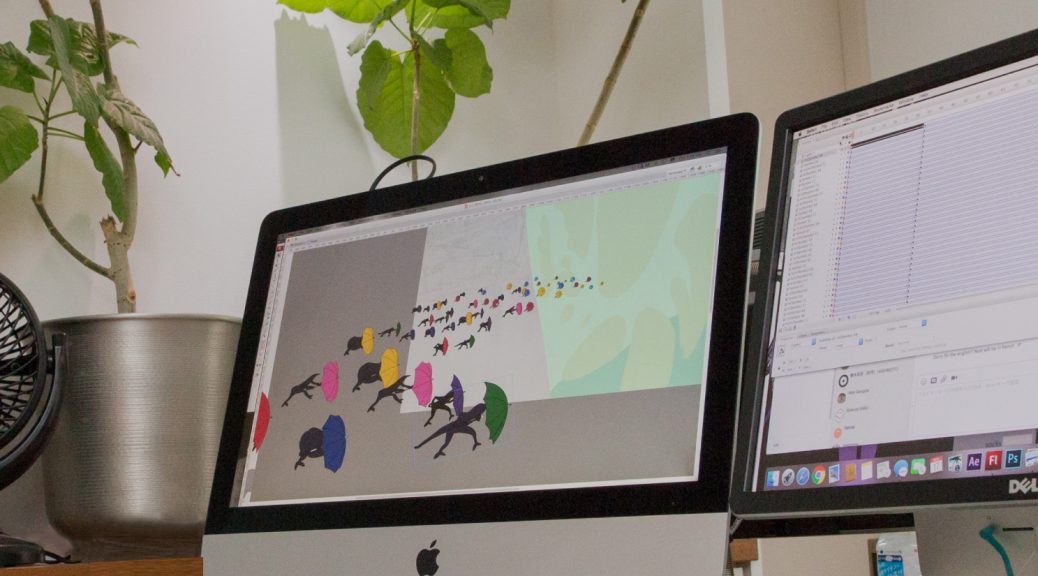 Here’s the second half of Masaaki Yuasa’s interview, where he talks about Science Saru’s new original movie Lu Over the Wall. Lots of insight on the creative process, both in the technical sense and his philosophy. The Japanese interview can be found on the official site. Highly esteemed memecrafter bitmap translated it just for the SakugaSakuga (作画): Technically drawing pictures but more specifically animation. Western fans have long since appropriated the word to refer to instances of particularly good animation, in the same way that a subset of Japanese fans do. Pretty integral to our sites' brand. Blog.

A Yuasa work brings to mind action scenes that feature interesting animation, unusual perspectives, and shot compositions with a strong command of camera work. However, I get a slightly different impression from Lu Over the Wall.

Yuasa: The action scenes still make use of the usual gimmick of distorted perspectives, but I tried to make the composition and direction of everyday scenes as orthodox as I could. My aim was to make a feature-length animation that’s more earnest and traditional than any of the other works I’ve made so far.

I see that activities like eating a meal or walking through town are depicted with a lot of care.

Yuasa: I wanted the viewer to get a good look at the town’s scenery. It’s a story about Kai, a 14-year-old boy, but at the same time it’s also a story about the town he resides in itself, Hinashi Town. There is a proverb that goes, “The foolish old man removes the mountains.” But there are similar folktales all over the world, of tasks deemed impossible being accomplished over time and effort. Following in the same tradition, this movie is a fable of “the impossible being accomplished.”

The town is portrayed with quite a bit of detail. Is there a real town it’s modeled after?

Yuasa: I wanted the setting to have a fable-like feel to it, so there’s no specific town it’s modeled after. However, you could say it’s a collage of the feel of different towns I have been to. The Port of Nagoya and the Kurashiki shopping district were used as reference as well. Incidentally, the one who named it “Hinashi Town” is the screenwriter, Reiko Yoshida. It probably comes from Tanashi in Tokyo, I think (laughs).

The house Kai lives in has a playful design, doesn’t it?

Yuasa: It’s built as a pair of two buildings: a boathouse extending out into the waterfront, and the main building across the street. The first floor of the boathouse serves as a garage, and the boat can be launched straight from there. This is modeled after the traditional “Ine boathouses” in the town of Ine, in the Yosa District of Kyoto. The design of the exterior of the main building of Kai’s house is based off other houses as well. The layout of the house ended up being quite complex, with each part using different references, to the point that even I don’t know how Kai’s house works on an architectural level anymore (laughs).

As a story that takes place in a fishing village where mermaids appear, there is a lot of water that appears on-screen.

Yuasa: Because you can’t breathe underwater, the sea is dangerous to humans, but once you grasp that fact, there is an exciting new world that awaits. You can move in all directions underwater, so you have more freedom than on land. Once you cross that single barrier, a new world opens up.

Why is it that the water isn’t blue, but rather a lovely green color?

Yuasa: The water moves because of supernatural powers, whether it is under the curse of O-kage (the large rock that blocks out the sunlight in Hinashi Town) or the effect of mermaid magic. That’s why it’s not a natural blue, but green, as if a bath powder had been added. 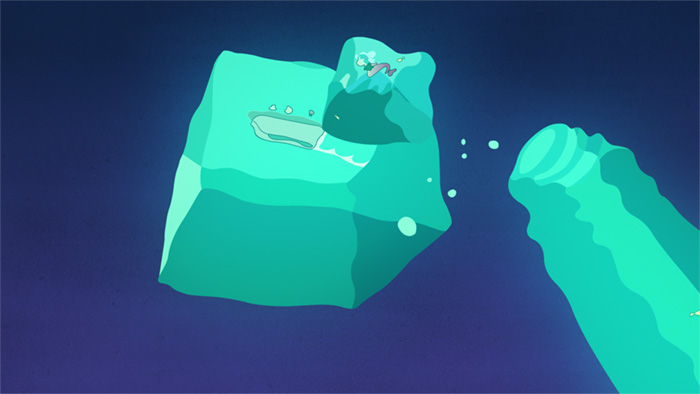 The way the water moves is really interesting. For example, how it gets cut out as a cube, as if it were solid.

Yuasa: The water controlled by the mermaids was made unnaturally cubic to clearly show its paranormal nature. It’s much like the rectangular monolith on the moon in Kubrick’s 2001: A Space Odyssey (1968), which the viewer can sense does not belong. When something like water, which originally has no shape, takes on a clear-cut shape like that, you can feel that there is some kind of external force at work.

It seems like you have quite a bit of emotional attachment to animating water.

Yuasa: A long time ago, when I worked on the key animationKey Animation (原画, genga): These artists draw the pivotal moments within the animation, basically defining the motion without actually completing the cut. The anime industry is known for allowing these individual artists lots of room to express their own style. for the TV series Kiteretsu Encyclopedia on an episode titled “Frosty, Chilly Putty Water” (episode 19, broadcast in 1988), I got to animate solid water and it was just so much fun (laughs). Ever since then, I’ve been left with a feeling of both “I want to animate that again!” and “I wish I could have animated that better…” After that, I got to work with water in a short anime titled Slime Adventures that was screened at an event, but it still wasn’t enough. This movie fulfilled my heart’s desire to properly make a work where water takes the forefront. My goal was to “feature interesting animation” that would give you a sense of space while being as simple as possible.

This film is produced fully as a Flash animation1. Is Flash well-suited for depicting the behavior of water?

Yuasa: Water is difficult because it’s constantly changing shape, but I think Flash’s strong points are “smooth movement and clean lines.” So I think it’s suited for portraying small objects growing larger and larger without losing their shape, or for things that smoothly change shape like water. You see, with traditional animation, you invariably end up with some shaking. It’s possible to make lines in Flash look hand-drawn, but I prefer these clean and simple lines. However, when I say this to Flash specialists, they tell me, “I don’t like that because it’s so Flash-like.” (laughs)

Yuasa: I love scenes where dancing lightens up a stern atmosphere. For example, there is the scene in the movie The Tin Drum (1979) where the Nazi soldiers break out into a waltz as the boy plays his drum, or the scene in the movie The Fisher King (1991) where the hurrying travelers in a New York train station suddenly start dancing. In this movie, the dispirited townspeople begin dancing as a result of Lu’s powers. I’m the type who likes to move wildly to the music at concerts as well (laughs).

From its tale of adolescence to the characters’ charm, the music, and the interesting motion, this is a movie with many points of entry.

Yuasa: For the little kids, I want them to come watch the movie to see Lu and her father. For the slightly older kids, I hope they come away from it feeling the joy of meeting friends, of seeing the world around you open up, and of singing and dancing. And I’m sure the parents out there will understand how Kai’s father feels. If you’re a grandfather or grandmother… please feel free to reminisce about past romances (laughs).

The movie’s outlook can be quite harsh as well, bringing to mind the current state of Japan.

Yuasa: Hinashi Town once attracted many tourists as a fishing area, but that is in the past. It is a town that moves neither forwards nor backwards. Standing still and taking no action may be fairly peaceful, but it leaves you unable to stop the inevitable sinking. If you ridicule those trying to take action, you’ll feel a sense of relief when they fail. You see this pattern relatively often. However, if you’re just bailing out the water leaking into your boat, it will simply sink in place. The only way is to set a destination and move towards it. Where do you want to go? Where do you need to go to be happy? If you tremble with fear, you won’t get anywhere. But if you don’t worry about your boat sinking, if you set a destination and start rowing, even if your boat eventually sinks, if you swim, rest, and keep on swimming, you can make it. Once you firmly believe, “I can do it,” you will definitely be able to make it through. That’s the kind of inspiring film I hope to have made.

Thank you for this awesome translation!