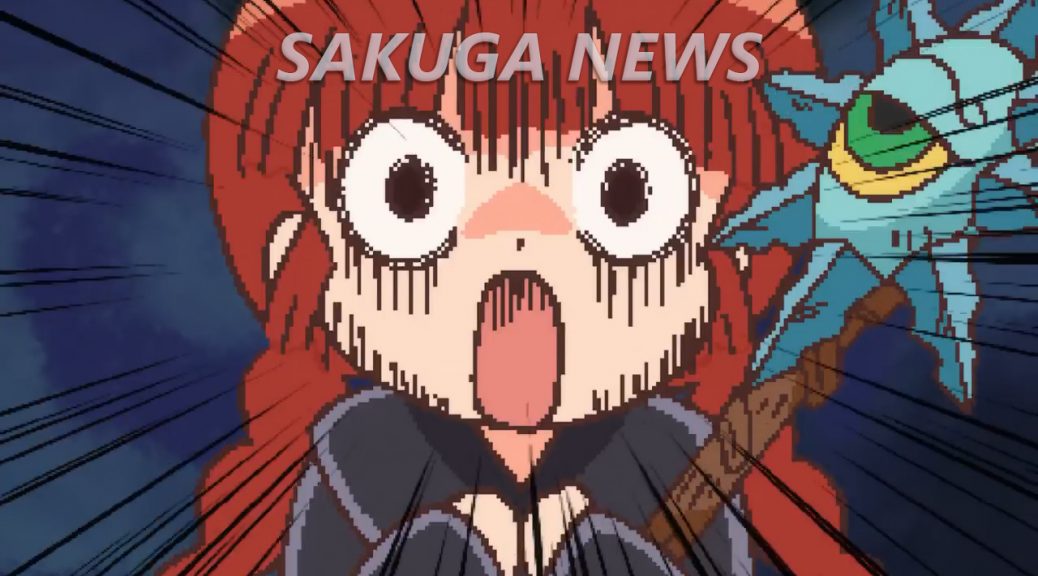 It’s time to highlight an interesting industry anomaly, since a mysterious incident that has been going on for a while has finally been solved. What happens when an anime director who also happens to be the show’s main writer gets fired months before the broadcast?

Magical Circle Guru Guru was a manga series that ran from the 90s until the early 00s, garnering enough popularity to receive multiple animated adaptations. 2017 marks its 25th anniversary, which was going to be celebrated with an entirely new TV anime adaptation. That project ended up in capable hands, with the following staff at Production I.G: 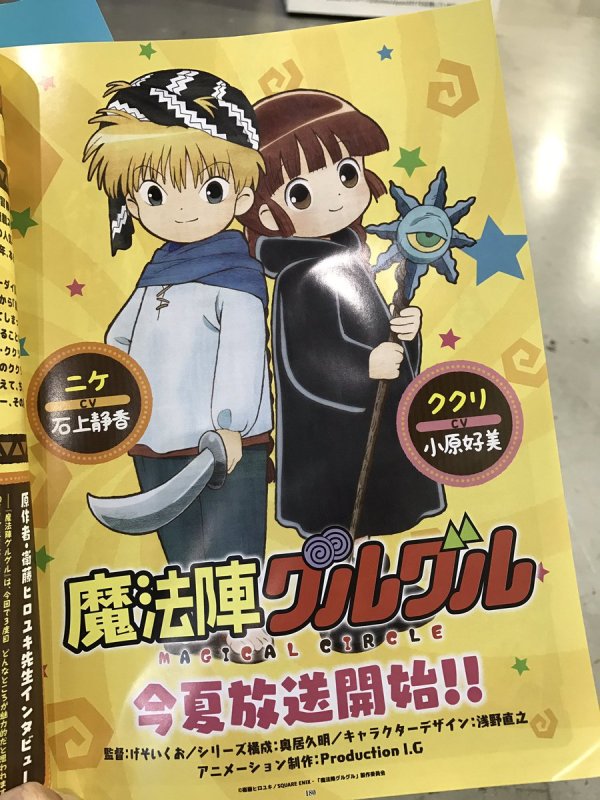 When this leaflet was first spotted during the massive industry event AnimeJapan, Asano’s name felt like the one that would receive the most attention; he’s a very capable animator after all, plus he had recently served as the designer of the mega-hit Osomatsu-san. There was something more curious about this announcement, however. Hisaaki Okui, best known in the industry by his pen name Ikuo Geso, had tweeted a mere 3 days before that he had been fired – no specifics given, but his tweet on March 22 and this reveal on March 25 felt like they had to be connected.

As if to address those suspicions, the official site updated almost immediately to showcase a rather nice promotional video, all the voice actors and actresses that had been revealed…but no animation staff. If Geso had just been fired on that same week, it would make sense for him to appear in the flyers that get printed beforehand, but not in the website that can be changed at the very last moment. And it didn’t only make logistical sense, it was also easy to understand why the higher-ups might have wanted to get rid of him. Fans quickly dug out many recent tweets of his where he casually (but never explicitly) complained about his job and coworkers. Geso has always been rather frank, and even used to regularly hold livestreams where he would reveal details about his work. And there are plenty of studios where that attitude wouldn’t cause much of an uproar, but Production I.G is a much more serious corporation than the vast majority of anime production companies. You might disagree with their choice to let go of a talented person for such a reason – I do – but it’s a hardly surprising move. Either way, the events seemed rather clear despite the lack of solid proof. Over two months have passed since then, with the project remaining rather low-key in its promotion. Just one month before its broadcast we still had no word on its staff…until today, that is. 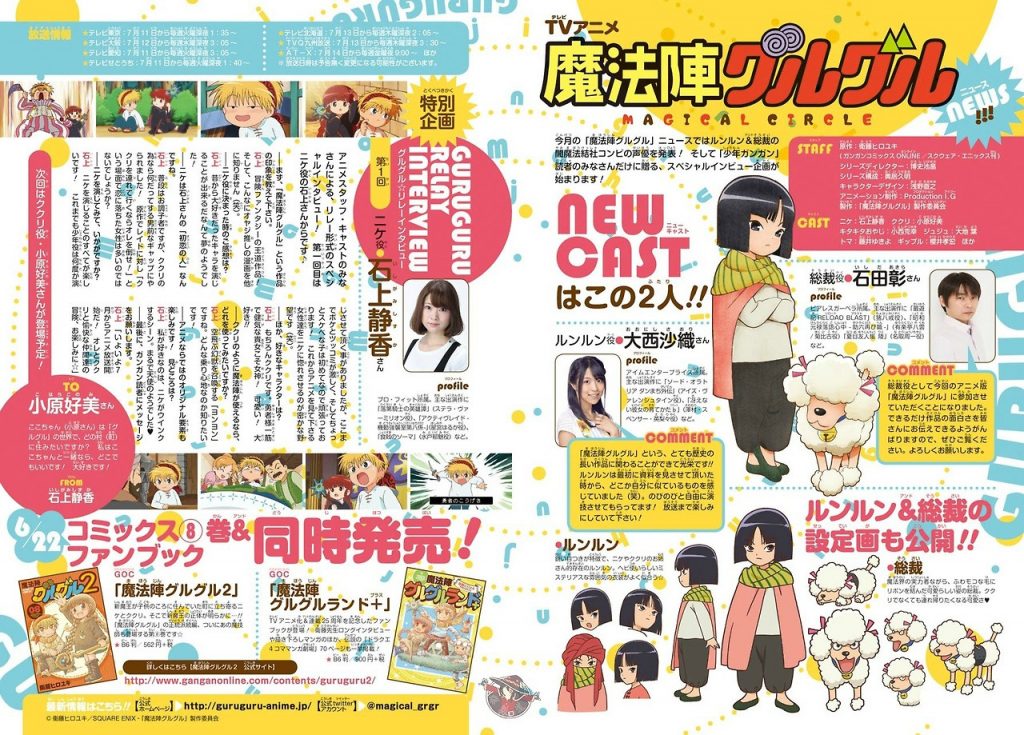 — Series DirectorSeries Director: (監督, kantoku): The person in charge of the entire production, both as a creative decision-maker and final supervisor. They outrank the rest of the staff and ultimately have the last word. Series with different levels of directors do exist however – Chief Director, Assistant Director, Series Episode Director, all sorts of non-standard roles. The hierarchy in those instances is a case by case scenario.: Hiroshi Ikehata
— Series Composer: Hisaaki Okui
— Character Designer: Naoyuki Asano

Weirdly familiar, isn’t it? Asano obviously was going nowhere, but we finally have a new director: Hiroshi “ahoboy” Ikehata, a recurring name in this site. Whimsical comedy with strong visual personality seems to fit him like a glove, so this is as good of a director replacement as we were going to get. It’s important to note that while Geso’s original credit was director (監督), ahoboy is instead being referred to as Series DirectorSeries Director: (監督, kantoku): The person in charge of the entire production, both as a creative decision-maker and final supervisor. They outrank the rest of the staff and ultimately have the last word. Series with different levels of directors do exist however – Chief Director, Assistant Director, Series Episode Director, all sorts of non-standard roles. The hierarchy in those instances is a case by case scenario. (シリーズディレクター); it’s possible that he’s taking more of a supervision-type position, giving more room for freedom to the episode directors in a project that sort of lost its leader for a while. We already talked about a similar situation when covering the case of another director getting fired, if you can recall the curious incident with Gundam: The Origin. In this case it seems clear that Geso had already taken all fundamental decisions about the series before being removed, as shown by the fact that he’s still credited for series compositionSeries Composition (シリーズ構成, Series Kousei): A key role given to the main writer of the series. They meet with the director (who technically still outranks them) and sometimes producers during preproduction to draft the concept of the series, come up with major events and decide to how pace it all. Not to be confused with individual scriptwriters (脚本, Kyakuhon) who generally have very little room for expression and only develop existing drafts – though of course, series composers do write scripts themselves.. It might be a bit awkward for him to see his name as the main writer for a series he got fired from, but that does mean that they’re going to respect his plans in this regard. That is reassuring and honestly makes me confident on a project that still is in good hands. Many fans are still struggling to internalize that anime is made by people, but the next step is realizing that it’s not made by individuals – teams are large and contain all sorts of artists, and if this turns out well it’ll serve as proof that even if you lose the person with the most authority, it’s not all lost.

I’ve read you complain about the industry for doing things I thought were quite insignificant. But now you say that firing a director for sharing his thoughts about their job is understandable because it is Production I.G.?

I explicitly said I disagree with what they’ve done, but that it’s entirely unsurprising that I.G in particular would do this. Reading is advised.

It would be nice to have the translated tweets to add context.

They’re mostly not specific, but he kept on calling the people he was working with a bunch of dumbasses. Frustrated ranting that you wouldn’t want your strict bosses to be able to read.

I think “a bunch of dumbasses” is putting it rather mildly, especially after that “ゴミクソうんこ野郎” and the “die die die die”…

In any case, one of his tweets is along the lines of “if you think things would go smoother without me then just fire me already” which makes me think that this wasn’t simply a case of strict higher ups not being down with an employee’s Twitter rants, his attitude was likely disrupting work or at least creating a difficult work environment.

That’s part of what I meant with it: not just that I.G is a serious studio that would want to stop that for PR reasons, but that their way of operating seems maybe too incompatible for things to work smoothly. Geso might be one of the most extreme individuals on the latest wave of webgen artists, for whom things like recruiting people on twitter are perfectly normal. The old guard coexisting with these new sources of talent can lead to interesting projects (as seen on Signal.MD, another I.G Port initiative) but also create friction. Just yesterday, a certain animator from… Read more »

Wow, he might be talented but those tweets show him as a thoroughly unpleasant person and I’m not surprised he’d been fired. I mean, I’m sure all of us have these sort of thoughts about our coworkers, but most of us at least think twice about tweeting them, with or without names attached. The fact that he apparently didn’t is pretty telling.