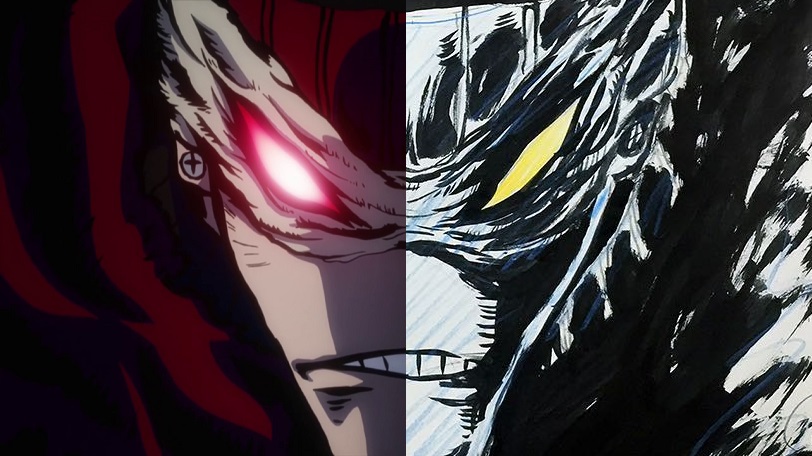 My Hero Academia’s animation producer Yoshihiro Oyabu mentioned on twitter that episode 30 was the result an all-out lineup of creators, commanded by Yoshihiko Umakoshi…who’s celebrating his birthday! Let’s see if the episode delivered on all that promise.

— This episode ended the relatively short Hero Killer arc on a high note. It was a fitting moment for everyone’s beloved character designer Yoshihiko Umakoshi to make his return to the animation director’s seat; after all, he also handled the true highlight of the UA Sports Festival arc: Midoriya vs. Todoroki. His work this time around felt a bit less thorough than the previous spectacular instance, possibly because of the shorter production time he had to work with. If you visited his Anime Expo panel then you should know he’s a really fast artist, so imagine how much of a difference he must have still managed to make! Umakoshi’s touch was unmistakably apparent with his intentionally rougher lineart, ingenious shading and even inclusion of his speciality: drawings with ink marker and brush. I’ve noticed some of his younger colleagues like Minami Sakura and Takashi Mitani have been very impressed with his corrections, saying they feel immensely natural and alive. I’m happy to see him become a role model for more up-and-coming talents. And since we’re talking about him, I feel the obligation to mention that it’s Umakoshi’s birthday today (yesterday Japanese time)! Congratulations!

— As you’ve probably noticed, multiple animation directors assisted Umakoshi with his duties. Most notable of them was Yuki Hayashi, a rather popular animator who had spent his whole career tied to Toei Animation…until last month, that is. He already helped out on HeroAca as key animator both under his not-so-secret pen name (OP2, episode 23) and real name (OP3) in the past, but this was the first time he participated as a supervisor. He was in charge of the scenes with Endeavor and corrected the work of key animators since the layout stage of the production. Why Endeavor, a character that is inherently more complicated to deal with due to his fire effects? Because he likes drawing him, that’s all! Umakoshi confirmed that it also was Hayashi who animated the meme-worthy Endeavor scene from episode 23. Other assistants included Umakoshi’s frequent collaborator Mitsuko Baba and the series’ regulars Takahiro Komori and Hitomi Odashima.

— And while I’m talking about the Endeavor scene, background art studio Atelier Musa sneakily included their name in one of the backgrounds. Easter eggs are always welcome, as far as I’m concerned.

— Ken Otsuka storyboarded the episode and once again exhibited his prowess. Iida’s rise was executed delightfully with three minimalistic dichromatic shots, each of them followed by the reveal of the surroundings. The shot of Iida’s blood running down his arm stopping at his clenched fist, Otsuka’s work with the depth of field and reflections, even the action framing itself was bursting with energy. I was also particularly fond of the color work during Stain’s final speech, which finally conveyed how terrifying his presence is.

— The double attack shown in the video above must have been very demanding from a production standpoint. 3D backgrounds are never an effortless shortcut as composite crew had to flawlessly match the hand-drawn animation with it to deliver such an intense scene without it falling apart at the seams. Digital animator Moa Ang confirmed that she animated the cuts of Stain evading Todoroki’s attacks and Iida’s Recipro Extend jump. Yasuyuki Kai presumably handled the part starting with Deku’s jump until the finishing kick-punch combo; the smears in the scene reminded me of his work on episode 28, and his mastery of 3D space is well-known.

— The episode featured a strong line-up of animators as promised, though without many surprises as most of them are series regulars. Umakoshi disciples who worked on episode 23 like Aiko Sonobe and Yumi Kobayashi returned to his aid, while ace Gundam animator Sakiko Uda handled a short action scene between Stain and Todoroki after her impressive work on episode 28. Digital animator Shu Sugita – who has been receiving lots of attention for his recent outstanding work – returned after doing key animation for the new ending. He presumably animated Iida’s finishing blow to Stain, since he hinted on twitter that he did an important scene and those effects resemble his past output. Masaya Sekizaki reached his tenth episode of season 2, proving himself to be a ridiculously consistent animator. He drew Endeavor’s fight against flying Noumu, once again delivering quite strong work considering how fast he keeps putting it out. And to be fair, it wasn’t only recurring names who worked on the episode. Studio Makaria’s trio of Korean digital animators Eri Irei, Moa Ang, and Myoun, plus Little Witch Academia‘s Hiroki Arai and Eimi Tamura, also appeared. This might not have been as loud of a climax as the previous arc got, but it was still an impressive episode that proves how many interesting artists will always be willing to come help Umakoshi. Also, props to BONES for crediting Moaang and MYOUN separately, because they haven’t been that lucky recently!

love the analysis! keep it up!