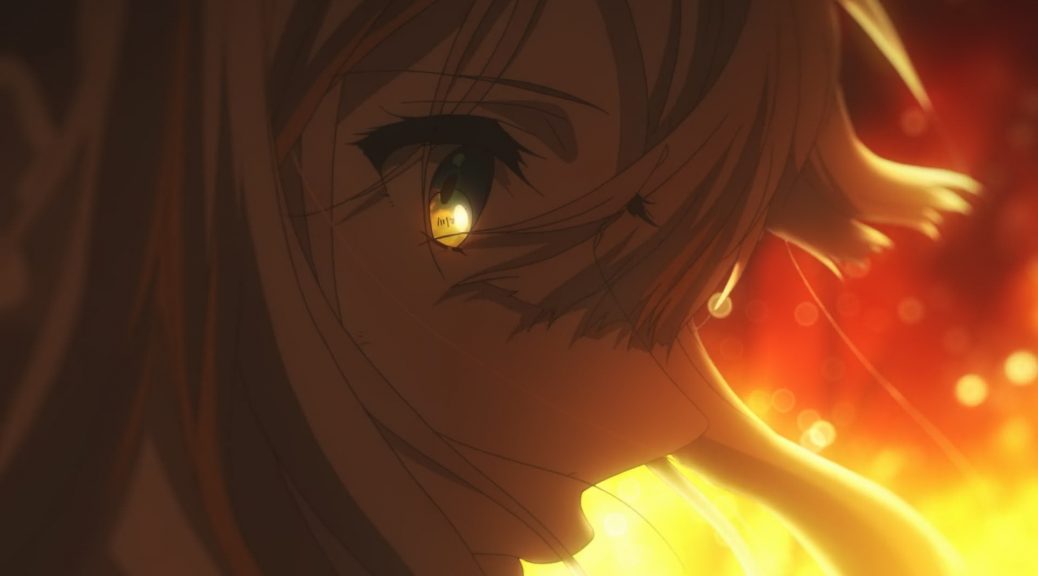 The arc dealing with Violet’s loss and acceptance comes to an end with a spectacular set of episodes that could, and maybe should, be the show’s grand finale. Let’s examine the work of the talented directors involved and the ups and downs of this production, while waiting for whatever will come next.

─ Now this was a bit of a mixed bag. Let me preface my complaints by admitting that even at this point, the overarching narrative about Violet and her past that I sort of dreaded was already turning out much better than expected, confirming that Takuya Yamamura’s outstanding direction during the last few scenes of episode 7 really were a turning point for this particular thread. That said, one of the reasons I was wary of this arc really did become an issue. As far as I’m concerned, Violet Evergarden‘s unsubtle sentimentalism has managed to work for most personal stories we’ve seen so far, but when that same approach is applied to something like Violet’s past the result is a bit more awkward, since the presence of villainous figures kinda turned those into ridiculous caricatures. This isn’t a condemnation of the show’s loud tone because I do believe that’s worked fine for the most part, even within this genuinely well-directed episode, but this could have done with more restraint and nuance in the writing stage.

─ If we focus on the positive instead, we’ve got to talk about storyboarder and director Shinpei Sawa. When he was promoted about a year ago, it was precisely this kind of episode that I had in mind when thinking about his possibilities: something with more of an action focus, and that benefits from the experience of an animator who has always specialized in scale. A healthy dose of intense acting, his smart usage of color – like the muted palette once Violet visits their old home – and hints at his own sense for photography developing confirm that he’s not just a brute action sakuga master, but he really did shine best during those moments, perhaps even animating one of them himself. Sawa’s work on this show has been very extensive, assisting other directors in almost half the episodes, but this is the first one that really feels like his baby.

─ Sawa obviously wasn’t the only skilled animator who contributed to the episode, which actually sports the strongest line-up in the show to date: Seiichi Akitake (who I believe animated the expressive early segments, full of wild poses and smears that defy the show’s restrained art), detail-oriented Nobuaki Maruki, promotion candidates like Taira Yamaguchi and Nami Iwasaki, plus a fresh supervisor like Kohei Okamura who could make sure the whole thing was absurdly polished. The surprise came at the end of the key animation list, with none other than Yoshiji Kigami under his Fumio Tada pen name. As you might remember, key animation lists in KyoAni’s TV series are ordered by seniority with the episode’s key staff being listed at the end, but Sawa gave that honor to Kigami instead. Considering he seems to have animated the entirety of the striking final assault, as his 2D effects are absolutely everywhere, I’d say that he definitely earned the special spot. He’s never going to be as famous as some of his peers, but Kigami’s contributions to the studio are still invaluable.

─ If the previous episode was a bit of a misstep that showed the weaknesses of the show’s approach, this was perhaps the most stunning take on it. Yasuhiro Takemoto put together something powerful, unashamedly emotional, surprisingly visceral at some points, but ultimately very uplifting. His directorial confidence that I mentioned in the fourth episode comes across better than ever in this series as he was fully in charge of the episode, which he loaded with fascinating details. The hands, which have always been a symbol of the sumptuousness of setting and production, return as a motif that reminds us of Violet’s blood-stained past, but that also convey her current agonies. She isolates herself, rejecting the new companions who watch over her but also the person she has become, until she sees the result of her work and can start to accept herself. Now clinging to her new life rather than just an old memento, the once caged bird is now free. If that sounded cheesy is because it is, but also absolutely fantastic in ways I didn’t expect from this show.

─ Now the biggest mystery is how the show will manage to follow up what’s essentially the perfect closure for the series. Not in the sense of which events will happen, but how will they try to keep the momentum that it’s gained over these last few episodes. I don’t exactly have high expectations for whatever narrative climax they intend to build towards to, so all I’m hoping for is that they manage to sneak in some more touching episodic tales, as those had been the highlight of the series up until this arc. Prematurely delivering an impeccable finale is a good problem to have to be fair, but it really does make me wonder about how they’ll handle the remaining 4+1 episodes.

─ As impressive as the episode was, the animation unfortunately took a dip. The very limited roster of creatives seems to be at fault again, since we’ve got an animation director like Tatsunari Maruko who’s always needed assistance when supervising detailed work… accompanied by Kohei Okamura, showing up in two consecutive episodes. The result is rough art even in some climactic scenes, far from this show’s standard polish, and general stiffness within the episode as a whole. In the end the layouts were still excellent, Violet’s outburst did get across her pain, while the intro likely penned by Kunihiro Hane was every bit as gruesome as it needed to be, so I suppose this is just the animation nerd in me wishing for more on an otherwise exceptional episode. We even saw the expected TV debut for the studio new key animator Yuki Yokoyama, who joined a crew that’s even younger than usual in the production of the episode. I shouldn’t be so mean to them!

I’m starting to think this series might be poorly animated or one of the most disappointing of the season, judging by your review. I’ve only seen the first couple of episodes.

It’s definitely neither of those things, if anything stiffer than the first episodes hinted at since there’s only so much the small pool of people available could do. It’s an exceptional production in spite of that and packs quite the emotional punch.

It seemed like you were giving a lot of criticism towards the animation.

it’s the exact opposite actually; a lot of these post is him praising the animation despite the small staff on hand. If anything, he often wonders what possibilities could have come about had this production had the usual sized kyo ani crew on deck

Really? Well it seemed like criticism towards the animation directors.

Is it just me, or does the playwright and child in the play’s poster at the end look ike Kumiko and Taki from Sound! Euphonium? 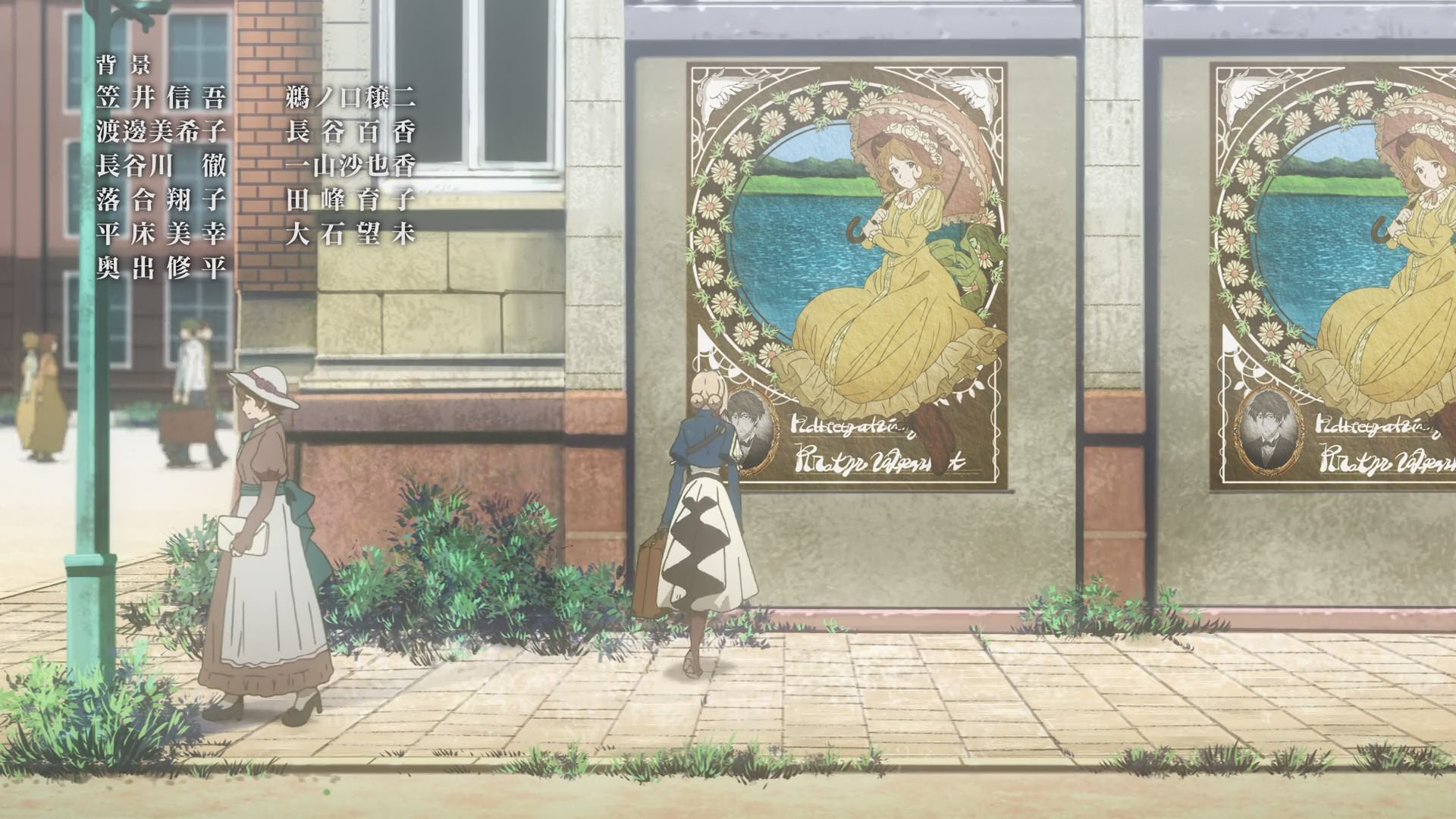 I didn’t notice the Taki similarity in episode 7, but that poster really gave off some Eupho vibes. Was this an easter egg, or am I imagining things?