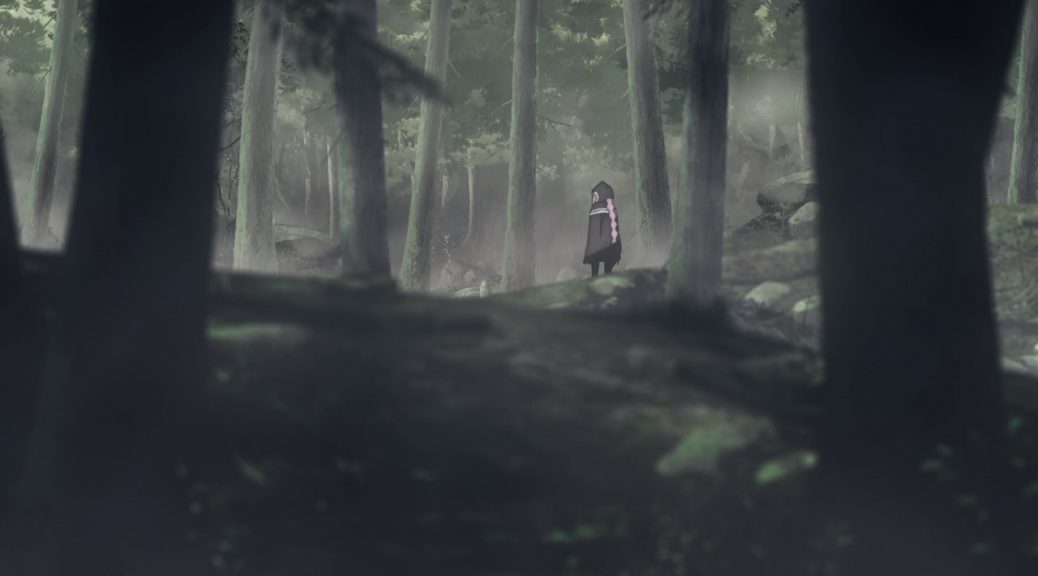 While F/GO Babylonia hasn’t quite kicked off with the bang many expected it to, things have began to take a turn for the better with its latest episode. As the cast finally settle into Uruk, let’s take this opportunity to explore not just why this episode stands out, but also the mind behind it.

Fate/Grand Order Absolute Demonic Front: Babylonia has, against all odds, been struggling to strike the sort of chord with me in a way that I simply didn’t expect. Its status as a landmark production plays a part in that, but there’s also the simple fact that I’m very much the sort of Fate fan that can gobble up most content related to the franchise with glee. Look no further than our Fate/Apocrypha coverage for proof of that – if it seemed like I was having a blast, it’s because I was. Now that might sound like I’m about to tear the series aprt, but the good news is that the episode #3 has managed to turn things around for me, and while there are multiple reasons as to why, all of them trace back to the person in charge of it: Isao Hayashi.

As with any project of this magnitude, there isn’t one single goal but a number of priorities that the production intends to chase throughout the entire run. One of these is, without a doubt, the portrayal of sheer scale. That was hinted at as far back as the earliest teasers, then all but confirmed with the PVs that followed. As you’d expect, this extends beyond just the environments that form the titular world; from its portrayal of Babylonian culture to the action scenes, everything is put together with the idea of bigness in mind. And that’s where we hit our first roadblock. Theoretically this is a great idea, more so when people like Shun Enokido have already proven just how well grand Fate action can work when handled the right way. Babylonia seems to be having issues in transitioning these ideas to the screen, though, leading to results that feel more like an illusion of scale rather than an accurate depiction. Enokido’s examples integrate the setting in meaningful ways, whereas here we have huge fields and forests that exist simply as empty backdrops for the camera to move about in. Looking at another example from the same franchise, the fights in Heavens Feel are much more tangibly rooted in their setting, despite Fuyuki being a less interesting backdrop for the action in theory.

The most concerning drawback of this lack of a concrete vision for the show was that it placed more of a burden on the artists involved, leaving them to improvise compelling action ideas since the conceptual work done during pre-production was so preoccupied with the huge scale it forgot about the creators meant to make that entertaining. There’s no denying that Megumi Kouno‘s animation in the first two episodes is exceptional, but it was an impressive technical showcase that failed to grab me. In contrast to that, Hayashi’s work in episode 3 was a different story altogether. The reason is simple, too: in a production where the rest of the team are playing an away game of sorts, Hayashi has landed right on his home turf. His experience with sequences that involve both layered movement and intricate camera work, particularly in 2011’s The [email protected]‘s most spectacular performance scenes, earned him the “fly-by camera expert” moniker back in the day, and culminated in him handling the movie’s most ambitious sequence by far. Not only did that trend follow him onto 2015’s Cinderella Girls adaption, but his work had also become such a trademark of the franchise that SideM‘s team made sure to call back to it despite him being occupied with another project at the time.

Now that we’ve established him as a perfect fit for what Babylonia‘s trying to achieve, we can direct our attention to his episode itself, which wastes little time in getting to the action. The immediate contrast is in the location, which is a much smaller and enclosed space in comparison to the expanses from previous episodes. Technically you can take that as an advantage in Hayashi’s favour, but it feels negligible when he does such a convincing job of making Gilgamesh’s throne room feel big in spite of it. Distance and verticality are established from the outset, while Ana’s incorporation of the pillars that adorn it into her aerial assaults make them the focal point of this scene, allowing the action to flow with them in mind at all times. Using them as a platform to propel off of is hardly unique, but her following attack is set up so that even should Gil deflect the chains, they’ll wrap around the pillar and allow her to keep the assault up. It could have ended there, but I genuinely love how even after flubbing the follow-up attack, she keeps the momentum going and circles right around him. That sense of distance and verticality remain present throughout, and altogether this makes the throne room feel like something that existed prior to the fight rather than an environment that conveniently manifested itself for it. Even Ishtar’s visit afterwards is framed to reinforce that idea, just in case you weren’t convinced.

Incidentally, did you know that Hayashi has been quietly added to the list of action directors? I won’t blame you if you didn’t; there’s been literally no mention of it anywhere outside of the opening credits, and even the official site hasn’t been updated to reflect it. According to some insider sources, this is all due to a curious string of events involving another similar role, but either way, the more important detail is why they had him tasked with this other role at first, and I’m willing to guess that it’s precisely because of what we’ve discussed here already. If that turns out to be true, then it would be a great sign for what’s to come, giving him a more involved role in the show’s action even outside of any future episodes he handles.

With all that said, I’d hate to paint the picture of Hayashi as just an action specialist. I wouldn’t even consider it the main weapon in his repertoire, if I’m being honest. This episode might feature the most impressive action in the show so far, but its focus lays in establishing Uruk as both a city and a new home of sorts for our cast to settle into. And that’s another reason Hayashi fits the bill. He’s proven his proficiency with character work and moments time and time again over the years, which brings us back to the imas franchise, where he’s been allowed the handle a number of its biggest emotional highs, even making an effort to match his own work to the voice actors’ performances. While fans still thought of him as the “fly-by camera guy“, his peers had already started calling him the “master of crying“, which is about as much evidence as needed on his ability to deliver on multiple registers.

When translated to the episode itself, I’d describe the results as comfy. Uruk truly feels alive; not because of a massive pan over it showing little figures moving about or detailed portrayal of hustle and bustle, but the closer look it takes at certain parts of the city as our party help out with all sorts of tasks. That’s even driven home on a narrative front with Ritsuka’s warm speech about wanting to help its residents because they’re just living their lives, same as any other person from the present. If we’re talking comfy though, nothing comes close to the events around the dinner table on the first night. A lovely display of budding camaraderie, the joys of experiencing new and delicious food, and people quietly opening themselves up in the face of the warmth (and treats!) around them. Even Leonidas’ drunken antics are the sort you expect to see among a group of friends just enjoying their time together. Needless to say that this one scene sold me on the cast, and the show as a whole, more than the entirety of the previous two episodes did, and I firmly believe Hayashi’s presence was a big part of that.

Of course, there’s no rule that these registers need to exist separately. Doubly so when you’ve got a character like Ishtar, whose personality makes her a magnet for all sorts of spirited acting even when another fight scene is about to kick off. The King of Heroes himself isn’t immune to it either, judging by his fondness for a giggle even in the middle of battle; incidentally, these are a perfect example of how tricky it is to make a convincing heartfelt laugh, which they achieved here with animation oscillating between the 1s and 3s depending on how much it was making his body shake. On the opposite end of the spectrum, we even get to see some nice combat that’s smartly framed to show off body movement on top of being cool. Good stuff!

I feel I should end this post by mentioning that everyone else’s work on the show so far hasn’t been bad. Previous episodes ended up suffering more for their odd pacing rather than the people working on them, who I’ve made sure to praise already. This felt like a good opportunity to talk a little bit more about Hayashi outside of things we’ve covered here before though, since we’re always willing to bring the spotlight to personal favourites that may not be as well known outside select circles. And while we’re not doing our usual series coverage for the show, chances are you’ll see another write-up or two about it from us as we get deeper into it. Personally, I’ve got my fingers crossed for some Noriko Takao goodness!

Great article !
Maybe you could tell at the beginning which episode you’re writing about, I was not sure I was up to date in my screening, and for people reading it in the future it will be harder to tell what “latest episode” you’re talking about.
But that’s really a small detail, compared to the enriching read it is ^^

I never even considered that, so good catch! Will make it a bit more obvious.

Ah, trust you guys to articulate so well what was niggling me about this show so far! I want to love Fate/Go Babylonia unconditionally because I’ve invested so much into it (in a number of ways, ahem) but it’s not my favourite show this season and in a way that feels wrong. Because it’s great. It’s stellar. It’s jaw-droppingly sharp. But something was off and you’ve nailed it here: illusion of scale. Part of me gasps at those wide shots, but then I’m like…this is a wee bit too close to a computer game right now. I cringed so hard… Read more »

I wasn’t able to place what felt off about it for myself either until I started writing this post, haha. Good to see another Apo respecter though, genuinely loved that show and seeing so much negativity about it always hurts :(.

Also not to be a tease, but you might just get another post on it sooner than you think!