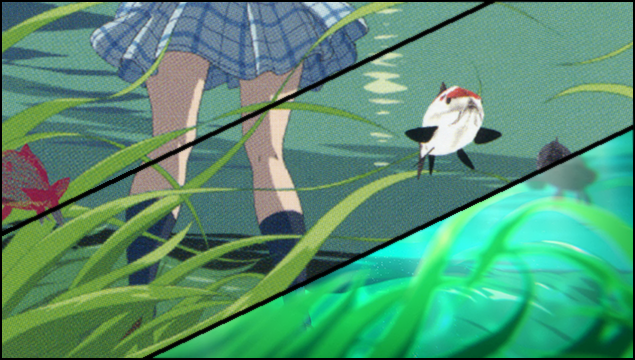 Today’s Koe no Katachi / A Silent Voice article brings us to Kyoto Animation’s 3DCG department to hear first-hand about their work in this movie. We’ve reached the end of this particular quest through the studio’s different animation departments, though the creator interviews for the film are far from done; next time we’ll be returning to its key staff to learn more secrets about the production and their personal approach towards it. But for now, let’s learn more about its 3D craft and how that impacts even things that aren’t actually visible.

What is the job of a 3DCG artist?

Their aim is to incorporate three-dimensional computer graphics (3DCG) into the hand-drawn animation. For this movie, Norihiro Tomiita oversaw all the 3D elements while the scenery was in the hands of Joji Unoguchi, who specializes in that area as someone with art direction experience. They constructed complex structures like the big attractions at the amusement park, crafted some vehicles, and even raised the density of population by adding CG mobs to scenes that required a massive amount of people (such as the surroundings of the station and the fireworks festival). Besides manufacturing elements that appear on the screen, the 3D staff also make reference materials of settings like classrooms to aid the 2D animators; the ability to freely move the camera is very helpful for the animators who have to draw the layoutsLayouts (レイアウト): The drawings where animation is actually born; they expand the usually simple visual ideas from the storyboard into the actual skeleton of animation, detailing both the work of the key animator and the background artists. and come up with the composition of the scene. 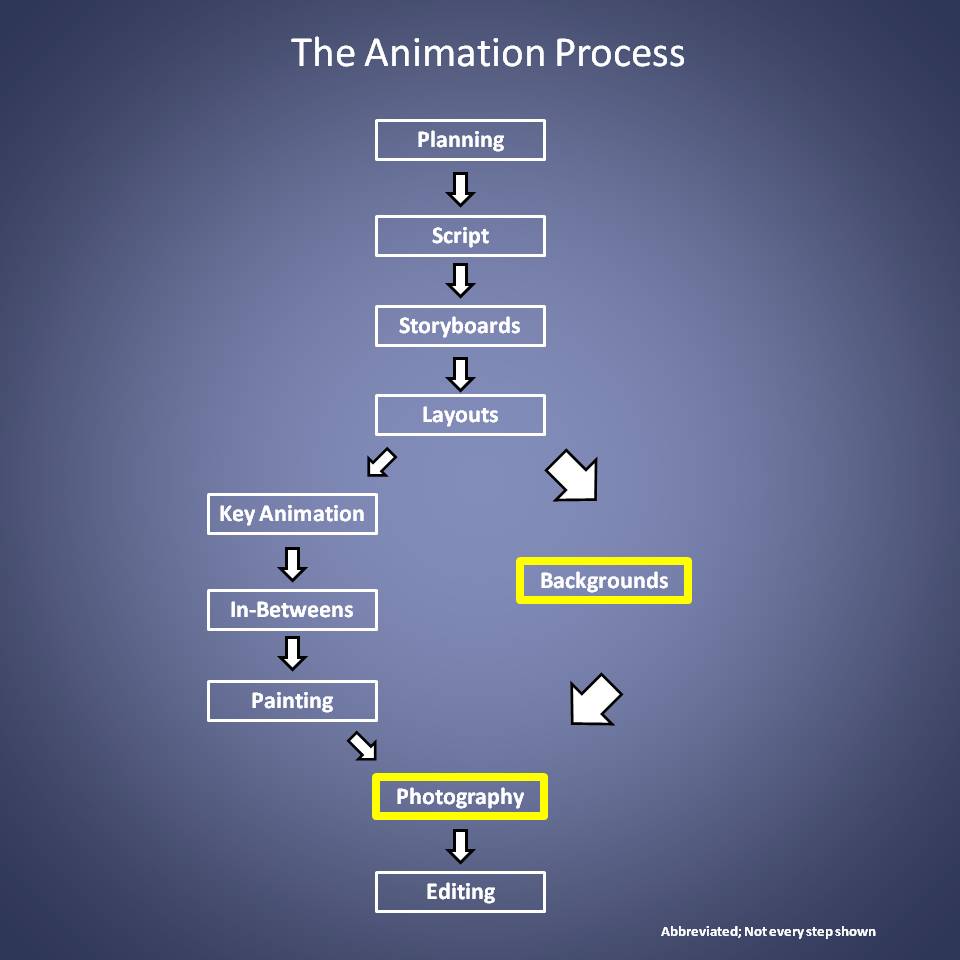 – What 3D concepts did you think about for this film?

Tomiita: This film is set in real streets, so we thought about how to best replicate their atmosphere in 3D. At points where we wanted to craft the vehicles going down the street with 3DCG, we would check the number of cars and general density of traffic in its real equivalent to portray that scenery in a natural way.

– What did you exactly make using 3DCG?

Tomiita: Some shots of the water plants, for one. There were tons of them swaying around in the river by the street used as reference, so we thought they would be very important when depicting it. We tried over and over to make them look as beautiful as possible. At first we gave them a textured feel, but when checking them the director commented that it might be better without it, so we got rid of that. People sum up what we do as just CG work, but the truth is that we use a variety of techniques to present things. Eventually our portrayal of those aquatic plants won over the directional staff and we rejoiced (laughs). We also didn’t want to over-emphasize the carps swimming around in the same river…and yet they give it such a nice touch that I think it’s fine that they steal the viewer’s attention to some degree.

Unoguchi: One school hallway I was in charge of turned out to be very troublesome, since the director requested to make it feel a bit like watercolor painting. The moment I heard that I thought to myself that she had made quite the request (laughs). 3DCG is typically used for sturdy elements like cars and trains, so delicate work meant to evoke a watercolor feel is far from its forte. I tried many things to achieve that effect, and eventually the director approved of what I had produced.

The hallway in question, densely populated by life-like character acting. The 3D backgrounds didn’t only have to fit that atmosphere, but also be coherent with similar scenes that had 2D background animation.

– How can 3D enhance hand-drawn animation?

Unoguchi: When it comes to 2D animation work, the direction you want to steer the 3D elements towards is not photorealism but a hand drawn-like feel. Which is to say, you don’t want the sense that it’s 3D to even surface. The finished product should appear as natural as possible.

Tomiita: One of the merits of hand-drawn anime is the well-intentioned lies it creates. For example, when you want to stress out the depth of a drawing in animation, you can slightly exaggerate the perception of space so that something feels further than usual. 3D elements by default occupy space in a more realistic way, but in order for them to match the hand drawn lines naturally it must follow the path marked by the key animationKey Animation (原画, genga): These artists draw the pivotal moments within the animation, basically defining the motion without actually completing the cut. The anime industry is known for allowing these individual artists lots of room to express their own style.. In this regard, its role is to achieve harmony with the lineart and avoid any awkwardness. There’s nothing that brings us more joy than viewers saying “That was 3D? I had no idea!”. That means we truly managed to fit within that title’s world.

Unoguchi: When Kyoto Animation uses 3D backgrounds, all our department’s staff work on a single cut until it is finished. I wonder if that’s unusual. I might be fixated on the future holding 3D space as the root of all backgrounds.

I remember watching Rocket jump’s video on CG in movies and loving how they show how CG low key helps with visuals in ways people don’t notice (i.e extras, backgrounds, people’s features etc.) It makes me happy to see that it has the same role in anime cause hearing people ragging on CG like it’s the plague is irksome.

I’ve seen 2D animators straight up complain when they’ve got to work on something set in dense environments that have no CG references, since it’s such a big help for them. Some people’s digital-phobia is absolute nonsense.

I really love 3D backgrounds in anime (As long as they are handled with as much care as KyoAni, 4°C or Colorido tend to do). Especially because the allow animators to freely move the camera without having to draw the whole backgrounds themself. 2D backgrounds have their own flair and tend to look smoother or more beautiful – But there are many scenes where 3D backgrounds, despite looking “worse”, really are the way to go. It’s important to have them both. Rain Town is my favorite example for this. The 3D water simply looks stunning and when the camera suddenly… Read more »

‘There’s nothing that brings us more joy than viewers saying “That was 3D? I had no idea!”’
–exactly what I thought when I saw the scene in this post. Wow. I have no words.
Is there a post on this blog about how they make 3DCG resemble hand-drawn animation? Because this is wildly different than the 3DCG crowds of something like Tsuki ga Kirei.

While I’m not a 100% sure, I think the animated short Paperman encompasses this Psudo 2D where they make the traditional 3D model and then along with the shading, they add hand drawn line work over it and mix it with various textures to give it the 2D feel. Joji Unoguchi has been doing background/art direction for KyoAni for while and even did some 3D work with Sound! Euphonium while Norihiro Tomiita has done a compositing work (best known as photography) and some 3D work for the Free! Tv series so they have the chops to pull this stuff off.… Read more »

thank you for information..