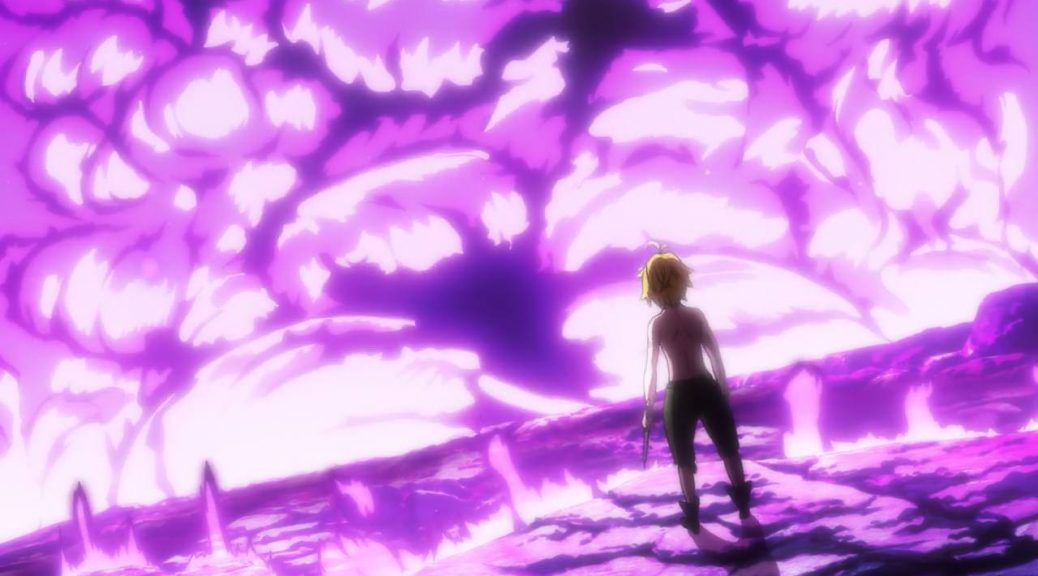 There had been insider rumors about episode 19 of The Seven Deadly Sins’ second season being quite the impressive action outing for about a month, and to no one’s surprise, they turned to be right on the mark! Once again we’ve got to thank an ambitious team of up-and-coming artists for this work, but they’re a crew that doesn’t really conform to what we’ve come to expect from young anime creators. Let’s see what they had in store!

StoryboardStoryboard (絵コンテ, ekonte): The blueprints of animation. A series of usually simple drawings serving as anime's visual script, drawn on special sheets with fields for the animation cut number, notes for the staff and the matching lines of dialogue. More: Ryuta Yanagi
Episode DirectionEpisode Direction (演出, enshutsu): A creative but also coordinative task, as it entails supervising the many departments and artists involved in the production of an episode – approving animation layouts alongside the Animation Director, overseeing the work of the photography team, the art department, CG staff... The role also exists in movies, refering to the individuals similarly in charge of segments of the film.:Maruyama Yusuke, Tomoya Tanaka
Chief Animation DirectorChief Animation Director (総作画監督, Sou Sakuga Kantoku): Often an overall credit that tends to be in the hands of the character designer, though as of late messy projects with multiple Chief ADs have increased in number; moreso than the regular animation directors, their job is to ensure the characters look like they're supposed to. Consistency is their goal, which they will enforce as much as they want (and can).: Kento Toya
Animation DirectionAnimation Direction (作画監督, sakuga kantoku): The artists supervising the quality and consistency of the animation itself. They might correct cuts that deviate from the designs too much if they see it fit, but their job is mostly to ensure the motion is up to par while not looking too rough. Plenty of specialized Animation Direction roles exist – mecha, effects, creatures, all focused in one particular recurring element.: Kento Toya, Eri Ogawa, Aya Akizuki, Akane Sakamoto, Mariko Komatsu, Chiaki Naruzumi

— Whispers of a particularly impressive outing in Nanatai had been circulating since the beginning of last month, which had both fans in the know and animators themselves waiting in anticipation for episode 19 in particular. As we’ve seen time and time again, the outstanding episodes in these sorts of productions have a tendency to be talked about even before their airing thanks to the extensive web of connections that’s become synonymous with this industry, more so when you’ve got a group of youngsters filled with pride in the work they’ve put together. And having seen the episode, the hype and their pride was entirely deserved! Let’s see what they delivered then.

— Before getting into individual animators responsible for the most eye-catching moments though, we always prefer to address the people whose vision supported the work; sure this is a straightforward fighting episode, but it’s still Ryuta Yanagi‘s skill on that field in particular that put him in charge of not just this episode but also the role of action director for the series as a whole. Yanagi’s major breakthrough was in the Sword Art Online franchise, where he’s served as one of the key supervisors of its almost iconic action setpieces alongside big names like Takahiro Shikama, Tetsuya Takeuchi, and Sejoon Kim. Conceptualising – and even personally animating – exciting sequences that force you into suspension of disbelief out of sheer coolness is a major forte of his; his incorporation of the battlefield into the flow of the action is always so thrilling that I find myself forgetting that spatially they often don’t really make much sense. The pros of animation!

— For a good example of that and Yanagi’s various qualities as a newbie director, look no further than his second opening, which is a strong contender to end up as my favourite of the year. The focal point in opening sequences like this are understandably on the big clashes shown in them, and this one delivers on that for sure, but Yanagi makes sure that the rest doesn’t just take a backseat to it. There’s a lot of pieces used to set the stage strewn throughout, with a clear focus on Meliodas and his past in respect to the literal demons that’ve finally come back to haunt him, not to mention the impressive low-angle shot of Elizabeth pressing forward. Even simple character introductions add to the experience thanks to being framed through their relationship and dynamics, and it all wraps up by having the viewers feel that sense of camaraderie between the Deadly Sins – even in spite of the schism between them at this point in the story! I’ve always stood by the belief that the best opening and endings are the ones where the song and visuals work in conjunction with one another, and Yanagi’s execution here does a tremendous job in reaching that ideal. Quite the feat considering this is the first time he’s had full control of one!

— And truth to be told, even when it comes to the action there’s more to Yanagi than his exciting storyboards. A lack of true 2DFX specialists (as opposed to animators who can draw them, which is right about everyone) to cover anime’s massive needs in recent times makes him a valuable commodity thanks to his prowess in that area, one which also became abundantly clear during his time on SAO. He’s sought out to serve as both the action and effects supervisor of a project thanks to this, and even when he isn’t, his love of hand drawn effects seeps into many scenes either way. It’s no surprise then that this is such a 2DFX heavy outing then, though in his defense, that’s not purely out of personal satisfaction. Big clashes in fantastical series like this (and even some more grounded in realism, like we’re currently seeing on Megalo Box) often rely on convincing FXFX: Shorthand for effects animation – water, fire, beams, that kind of cut. A pillar of Japanese 2D animation. work to get across the impact of hits, portray magical abilities, reflect the effects of the back and forth on the environment, and simply look cool. Assigning appropriate staff can make or break key moments in a show, and it’s safe to say they made the right call here.

— One person does not a production make, however, so now we turn our attention to the crew that took those solid concepts and helped made them into a fairly memorable fight. I mentioned that the youngsters involved had all the right to be proud of their work, since their presence dominates the episode from start to finish. Two such people are Kai Shibata and Kosuke Kato, both of whom have made recurring appearances in this season so far. Shibata handled part of Derieri’s assault on Meliodas, making sure to relay the brute impact of her strikes as well as her rapid movement. Kato’s sequence is likely to be the one that stood out for most viewers though, both for those happy to see some cool action and those interested in the details behind each artist’s styles. We’ve previously talked about how he exists as something of an antithesis to the general belief of how youngsters in the industry work nowadays thanks to his analog methods and Kanada style sensibilities, primarily in his timing and use of wild posing, though my favourite aspect might just be his implementation of smears to give everything that extra oomph. The drawings themselves pack a notable punch, quite literally in this case when the contortion of Gloxinia’s stomach is shown with almost agonizing detail. He’s shining bright at age 23 already, so definitely keep your eye on him on the future!

— Someone I’d personally like to highlight is Shota Goshozono, though doing so requires a brief return to Yanagi first. We’ve established that he’s one of the industry’s FXFX: Shorthand for effects animation – water, fire, beams, that kind of cut. A pillar of Japanese 2D animation. specialists, and that’s a recognition he’s earned more through sheer personality than with a vast output. If you’ve watched SAO’s first season, then chances are that you remember Kirito’s Gleam Eyes transformation during the worst ALO arc. With flames that are as dense as they are intense, it’s by Yanagi’s hand that this scene became so memorable in the first place, and he’s went on to show that this is a defining characteristic of his work. I bring this up in relation to Goshozono because his contributions to this episode feel very much inspired by Yanagi, most notable with the flames that Meliodas unleashes on Drole, but also in the brief glimpse of the aftermath of Monspiet’s Hellfire Bird. There’s a heavier reliance on more defined shading in his case, which is even reflected in the appearance Drole takes on when using his Heavy Metal, giving an effective and personal characteristic to his work. The similarities don’t end there however, as he even shares Yanagi’s less celebrated but also impressive grasp of complex body motion; Meliodas’s movement as he reaches for his sword to attack Drole is notable in its own right, and there’s constant attention paid to the latter’s tremendous size, whether it be the way his arms fall after being sliced off or his slightly sluggish movements, even more so when he’s struggling to keep his balance thanks to the damage being accumulated as the fight goes on.

— The major issue with this episode though is one that plenty of big properties face: pressure from certain parties to ensure that the adaptations follow the manga to an almost panel-by-panel basis. Certain productions can sometimes bruteforce their way past these limitations with sheer energy – take My Hero Academia’s highs, for example – but the attitude is more likely to hinder a creative team’s output than not. A simple comparison between this episode and Yanagi’s opening that we talked about earlier makes it apparent that it wasn’t allowed to reach its full potential, but their efforts in spite of these production constraints remain notable. There’s even a few select moments where they used this to their advantage, such as implementing background animation into Gloxinia’s swift evasion of Meliodas’s consecutive attacks to maintain the flow of the manga without it seeming so stale. Not ideal, but it feels like the team did they best they could, which as it turns out is some damn good work. Looking forward to their next major outing!

Thanks for the breakdown on this ep, and talking about the action director and his vision in particular. Even though I think I realize constraints, I never really fully understand just how much they can be restrained by a popular source material. How much do you think that the ambition of this ep may have affected some of the preceding eps?

Not that much, if I’m being honest. The approach to the production has allowed it to remain consistent, for better or worse, so even a high priority episode like this won’t detract too much from others even if they allocate most of their strongest staff to it. Helps that the youngsters responsible for most of the show’s highlights are also fast workers; Kai Shibata even turned up in this week’s episode, just as an example.