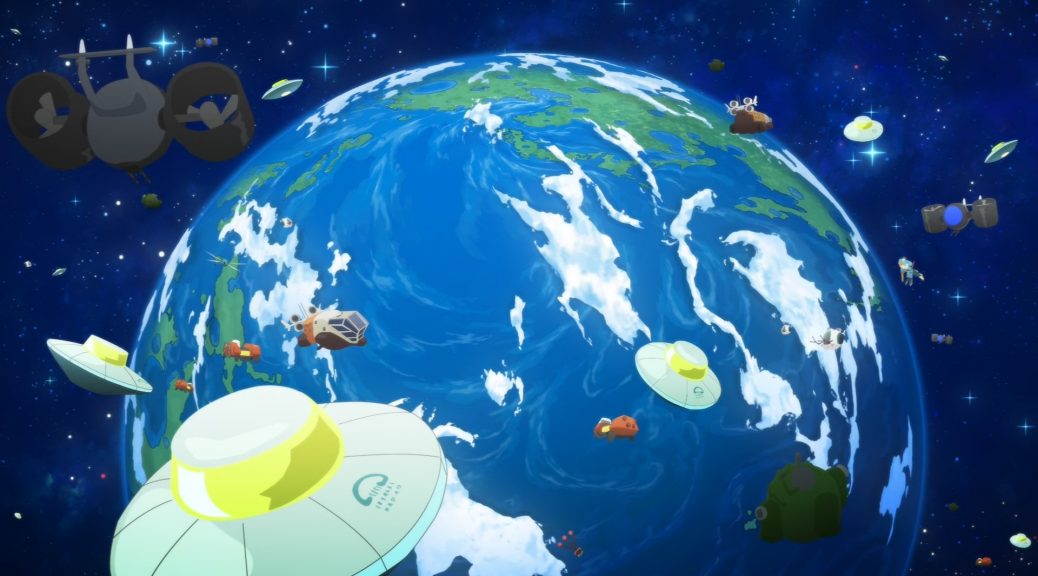 Keep Your Hands Off Eizouken came to an end without compromising the ideals of its production, even as deadlines got tight by the end. This is our final look at the most inspiring series about creating animation!

Keep Your Hands Off Eizouken ended true to itself, which is the greatest praise you can give to a title as idealistic as this one. The last stretch of episodes, going from the delivery of their mecha short film to their final work, is exhilarating in that distinctly Eizouken way, but somehow manages to escalate the madness. Episode #08, storyboarded and directed by Seishiro Nagaya, is an excellent example of that. Moments like the neat chiaroscuro sequence depicting Kanamori’s shady deals embody the stylistic diversity that we’ve been enjoying all along, while the show’s understated focus on its setting and the environment itself – a big factor even in the final short film they create – leads to a long chase scene that is equals parts hilarious and spatially aware.

And of course, this applies to the most cathartic scenes as well. Mizusaki’s parents, endeared by their daughter’s animation after recognizing much of her personal body language in the short film, acknowledge her acting skills in the field she truly cares about. Now that’s touching in and of itself, but the moment hits harder because Eizouken has always made an effort to animate each main character with a distinct style that fits their personality; those distinctly Mizusaki-like gestures that her parents notice are the same ones that Science Saru’s animation team has been emphasizing, as keeping her demeanor consistent and realistic has stayed a high priority.

Nagaya explained that Mizusaki’s climactic shot is actually a collaboration between various animators, a non-standard chimera cut. The acting blueprints are his, the arc of motion was handled by Izumi Murakami, Shuto Enomoto was in charge of the fluttering hair, while Eri Kinoshita polished up the character art. Fascinating insight, though his greatest reveal was that his instructions for this random shot featuring scared Asakusa was to draw her like a frog staring at a snake.

The same can be said about the other two members of the main trio, as seen in the following episodes. It’s clear that Asakusa embodies every storyteller out there obsessed with internal logic. Realism doesn’t matter to her, but she’s the kind of creator who feels physical pain when the smallest detail in their work feels arbitrary… which is sometimes unavoidable due to the harsh realities of the creative process, hence her relatable character arc that’s all about learning to compromise, then making those compromises bow down to your vision as much as possible. In summary, she’s a massive nerd in the way many storytellers are. Mizusaki’s realistic motion wouldn’t fit her eccentric passion – and fortunately, the team understood that as well.

Anytime Asakusa’s having a revelatory moment, or simply letting loose her inner passion, she instead turns into a cartoony mass of excitement. The climactic sequences of episode #09, handled by debuting Science Saru director Karin Noguchi and with animation by some of their in-house regulars like Nick McKergow and Yumeno Hoshi, show how well the core team understood their cast. Similarly, the start of episode #10 – presumably boarded by Yuki Igarashi, the ace behind the feat in efficiency and evocativeness that was the third episode – tells us all you need to know about Kanamori with her body language alone. She appears imposing, coercive… and half the time she’s simply bluffing, but that’s why we love her anyway.

Now, there’s no denying that the production has faced some trouble in these final stages. The members of the film research association weren’t alone in fighting against tight schedules, as Eizouken‘s staff barely made it to the goal in time as well. You might be aware that they finished the show just 4 days before the broadcast of the finale, but to put things in context even more, let me point out that the last episode was directed by Keisuke Inoue… who happens to be the series director for a Spring series he wrapped up in February. Which is to say, that he supervised the entire production process of Eizouken‘s finale after he finished a show of his that hasn’t even begun its broadcast yet. Eizouken‘s close end is far from a standout case – if anything, this is the norm in the TV anime industry – but the staff haven’t fully hidden that it’s been harsh, and the way they’ve had to split the workload in smaller chunks for this last spurt just to get things finished is an equally explicit showcase of how demanding the situation was.

Tight situations like this tend to be the time to make compromises, but as it turns out, the crew behind Eizouken might be even more obstinate than Asakusa. Rather than pressing the panic button and start majorly outsourcing and relying on veterans to get things done, it’s Science Saru’s young core crew who carried most of those final episodes. Directors with experience ranging from barely anything to nothing at all kept following Masaaki Yuasa‘s guidance, putting together something that still lived up to their master’s pedigree. The aforementioned Noguchi, Yuasa’s direct assistants Mari Motohashi and Fuga Yamashiro, and even Geidai alumnus Eri Kinoshita stepping up for directorial duties and animation supervision – it feels like this new batch of Science Saru creators has graduated with flying colors throughout this project. And, as if to congratulate them, Yuasa unleashed the trick up his sleeve for the excellent finale: storyboarded by his most reliable ally Nobutake Ito and with animation supervision by Naoki Kobayashi. A veritable theatrical level lineup, capable of ensuring that a team with little remaining energy nailed both the flashiest moments and details as small as breathing moistening some questionably used bags.

With all things said and done, I feel like Eizouken‘s greatest legacy will be in the artists it’ll inspire. We place a lot of value on shedding light on the dark realities of anime production, so much so that there’s the expectation that every new title focusing on animation has to find a way to condemn the state of the industry. And don’t get me wrong: it is important to have that kind of information out there, which is part of the reason why this site even exists. But I don’t believe fiction has that duty. Eizouken hasn’t shied away from showing that creating animation is a pain, and staff members have even talked about the way they’ve emphasized the frictions you see within creative teams based on their personal experiences. And yet, despite all the struggles that the film research association went through, despite all the effort spent by the staff to depict them, this is the most joyful anime about creating animation out there. Its positiveness is unyielding.

Eizouken is a show that cheered up animators who constantly worry about whether they made the right choice with this career path, and one that will likely push a number of young artists towards animation as well. And it’s not just new generations who will be glad this show existed: the aforementioned Nagata explained that it was Norio Matsumoto and Yuasa himself who got him interested in the artistry of anime, so being able to work with them in a show that depicts that magical moment where you fall for animation was like a dream. Considering how universal some of these worries are, it’s no wonder that the show has resonated so strongly with creators in general, even if they belong to entirely different fields. Eizouken is not going to be an industry-shifting title by any stretch, but I believe that it’ll mean a lot for artists all over the world – and as far as I’m concerned, that makes it actually important.