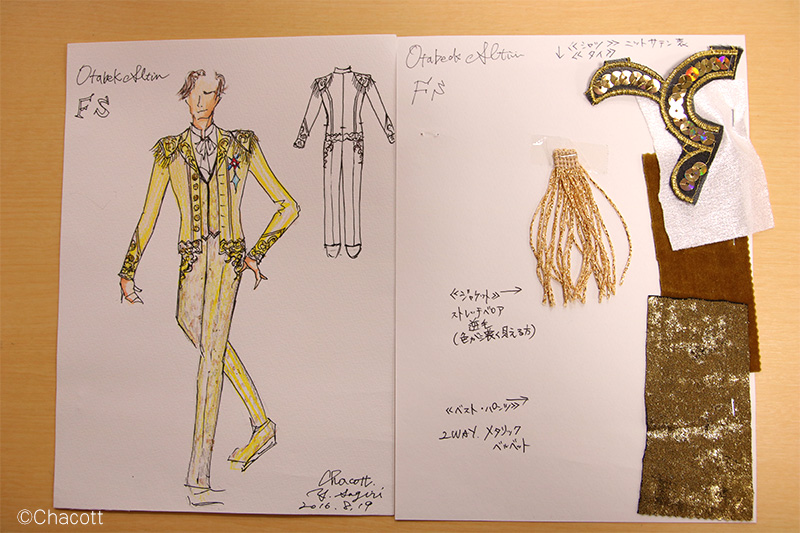 Just as the show itself, this series of articles covering Yuri!!! On ICE’s design process comes to an end – for now at least! Here’s the original Japanese interview. We’ve compiled all the translations at the end for easy access!

The last episode featured the free skate programs from the Grand Prix Final.

This time we’ll be talking about the free program costume of last skater to join the cast, Otabek Altin.

Just like with his short program costume, the Grand Prix Final was the first time we saw this costume.

Yes. His free program song is a grand song. I was asked to [design a costume] with enough splendor to suggest the founding of a nation. So that’s why I decided to use velour, a fabric with a stately feeling to it. The gold color was a key feature of the design. I wanted to symbolize (aiming for) a gold medal and the meaning of his surname*. The anime’s depiction might be considered a bit of a departure in that respect.

The jacket is made of plain stretch velour with backcombed pile. I mentioned this before, but when you use the pile in the opposite direction, it makes the color appear deeper. For the pants and the vest I used a 2-way stretch metallic velvet. In keeping with the “founding of a nation” theme, I used an accent on his chest that looked like some kind of national emblem. I wanted the whole outfit to sparkle, to convey the powerful message of the song’s lyrics.

In the anime, the costume’s design remained mostly the same but it ended up in a blue color scheme, huh?

Yes, also, in the original design, the lapels, shoulders, hem of the jacket, cuffs of the sleeves and hips all had an appliqué applied to them. It’s a sequined appliqué, but the sequins are stitched down in three directions* so that they wouldn’t catch on anything.

*- I’m not sure what the proper term for this is in English, if there even is one, but if you look closely at the closeup photo of the appliqué piece you can see that each sequin is stitched down in a Y pattern. 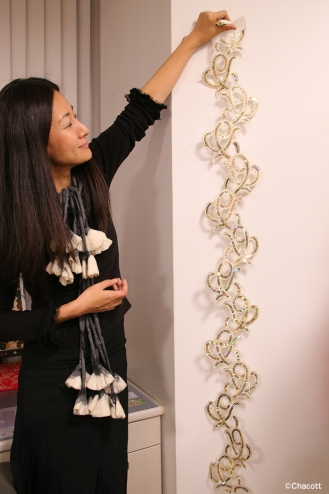 I see the appliqué has been cut up. What did it look like originally?

It looks like this (see photo). We cut this up and make it into the design!

Oh, how interesting! So, this costume looks like another three piece, but is it all actually one unit?

Yes. The top and bottom are separates, but the top is all one piece.

I guess that means you couldn’t actually button up the jacket.

Exactly. The buttons are covered buttons, but the holes are just embroidery.

Well, this is the last costume design and last behind-the-scenes piece for the main story. Thank you so much for reading. 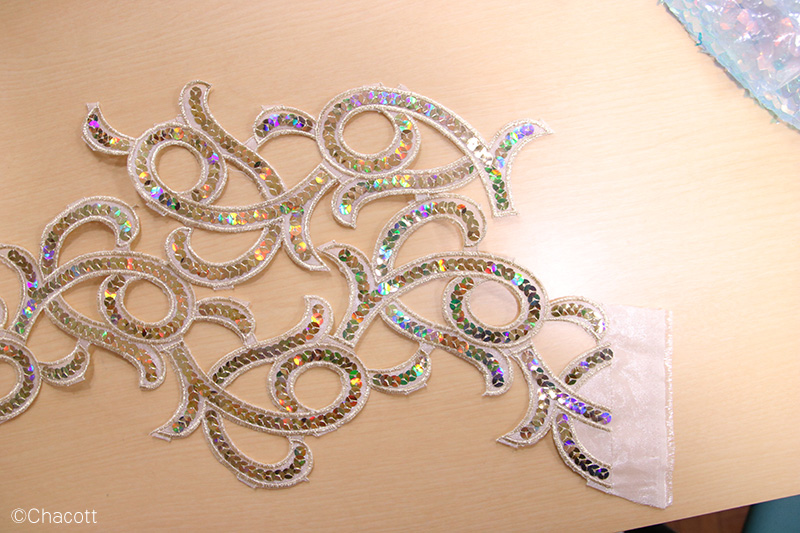 Next year, we plan to have some additional information regarding the costumes you see *outside* the show proper. You won’t want to miss it!

Thank you so much for translating these interviews every week. They’ve been a pleasure to read before the new episodes.